“None of the state-of-the-art weather forecasts and wave models—the information upon which all ships, oil rigs, fisheries, and passenger boats rely—had predicted these behemoths. According to all of the theoretical models at the time under this particular set of weather conditions, waves of this size should not have existed”.

From the time of Aristotle, mankind has looked to the field of scientific inquiry to explain the world around us.

From Copernicus to Charles Darwin to Stephen J. Hawking, the greatest of scientific minds have struggled to explain not only “that” the universe works, but also the “how” and the “why”.

We live in a near-miraculous age, when science has conquered complexities from space travel to molecular biology, to medicine, climate and astral physics.

Except sometimes, science has not the foggiest notion of why things happen. 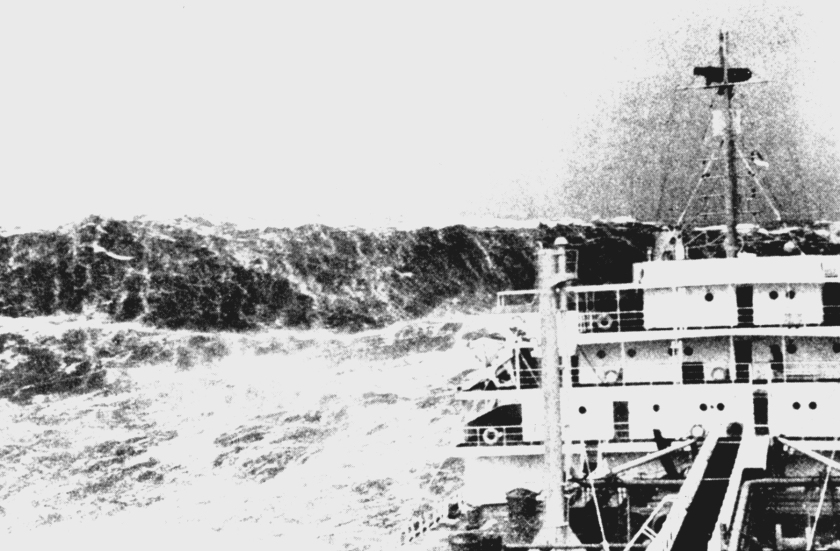 In 1826, French scientist and naval officer captain Jules Dumont d’Urville described waves as high as 108.3 feet tall, in the Indian Ocean.  Despite having three colleagues as witnesses, d’Urville was publicly ridiculed by fellow scientists. “Everybody knew” at that time, that no wave could exceed 30 feet.   Walls of water the size of 10 story buildings, simply didn’t exist.

Either that, or very few who’d ever seen such a thing, lived to tell about it.

For nearly 100 years, oceanographers, meteorologists, engineers and ship designers have used a standard linear model to predict wave height.  This model suggests that there will hardly ever be a wave higher than 50 feet. One of 100 feet or larger is possible but unlikely, occurring maybe once in 10,000 years.

Serious study of the subject is younger than you might think.  The first scientific article on “freak waves” was written in 1964, by professor Lawrence Draper.   Far from ridiculing old sailors’ stories about monster waves, professor Draper posited not only that wave heights “can exceed by an appreciable amount the maximum values which have been accepted in responsible circles“, but also a terrifying phenomenon he called ‘freak wave holes’, the exact opposite of a rogue wave.  God help anyone caught at the bottom of one of those things.

Once considered mythical but for the old sailor’s stories and the damage inflicted on ships themselves, the first scientific measurement of a rogue wave occurred in the North sea in 1984, when a 36′ wave was measured off the Gorm oil platform, in a relatively placid sea.

What really caught the attention of the science community was the “New Year’s wave” measured from the Draupner oil platform off the coast of Norway, on January 1, 1995.  Laser instruments measured this thing at 84-ft.  Oil platform damage above the water line, confirmed the measurement.

Not to be confused with a tidal wave which is caused by underwater earthquake or volcanic eruption, a rogue wave is a different kind of animal. Oceanographers define rogue waves as being two or more times the height of the mean top-third of waves, in any given sea state.

These literal freaks of nature are rare, unpredictable, appear and disappear without warning or trace, and are capable of sudden and catastrophic damage.  Modern ships are designed to withstand a “breaking pressure” of 6 metric tons per square meter or 21psi. A 39-ft wave in the usual linear model produces just over a third of that. A rogue wave can generate breaking pressures of 140psi and more.

In 2000, the British oceanographic research vessel RRS Discovery measured individual waves up to 95.5-ft. Analysis of the data took years, noting that “none of the state-of-the-art weather forecasts and wave models—the information upon which all ships, oil rigs, fisheries, and passenger boats rely—had predicted these behemoths. According to all of the theoretical models at the time under this particular set of weather conditions, waves of this size should not have existed”.

In December 1900, Thomas Marshall, James Ducat, and Donald McArthur vanished from the Flannan Island lighthouse, in the Hebrides Islands of Scotland.  No serious storm had been reported between the 12th and the 17th, and there was speculation about supernatural causes.  Subsequent inspection revealed wave-damage, 200ft. above sea level.

In 1909, the 500-ft. cargo liner SS Waratah disappeared off Durban South Africa, with 211 passengers and crew.

In 1966, heavy glass was smashed 80-ft. above the waterline of the Italian liner SS Michelangelo, killing three and tearing a hole in her superstructure.

In 1995, the 963-ft. RMS Queen Elizabeth 2 was forced to “surf” a 95-ft. behemoth to avoid being sunk. The ship’s master said this thing “came out of the darkness” and “looked like the White Cliffs of Dover.”

The 1975 sinking of the Edmund Fitzgerald is widely blamed on the 1-2-3 punch of a freak wave phenomenon peculiar to Lake Superior, known as the “three sisters”.

In 2007, NOAA compiled a catalog of over 50 historical incidents, most likely associated with rogue waves.

Serious scientific study of non-linear fluid dynamics began only 20-30 years ago. Researchers now believe that ‘super rogue waves’ of up to eight times the surrounding sea state, are possible.

European Space Agency satellite radar studies have proven that waves cresting at 65 to 98-ft. occur far more regularly than previously believed. Rogue waves occur several times a day, in all of the world’s oceans. One three-week period in 2004 identified over ten individual giants measuring 82-ft. and above, in the South Atlantic, alone.

MIT researchers Themis Sapsis and Will Cousins working with the Office of Naval Research, the Army Research Office and the American Bureau of Shipping have combined high resolution scanning technology with advanced algorithms, to digitize and map the sea state in real time, to predict the possible formation of rogue waves. The method only gives 2-3 minutes warning, but that is enough. Research is ongoing. Lighthouse keepers, mariners and oil platform operators the world over, anxiously await the results.