In 1865, Confederate Cavalry officer John Stith Pemberton was wounded by a saber slash. Like many wounded veterans, Pemberton became addicted to the morphine given him to help ease the pain. Unlike most, “Dr.” Pemberton possessed the wherewithal to do something about it.

In civil life, Pemberton was a chemist.  After the war, the former cavalry officer experimented with non-opiate pain-killers, landing on a combination of the coca leaf and kola nut.  By 1886, he was bottling his concoction and selling it for 5¢ a bottle out of an Atlanta pharmacy.  Ten years later, Coca-Cola was available in every American state and territory.

Europeans had long believed that natural mineral waters held medicinal qualities, and favored such beverages over often-polluted common drinking water.  In 1920, the company opened its first European bottling plant, in France. By the time of Hitler’s annexation of Austria, the “Anschluss” of 1938, Coca-Cola had been in Germany for ten years.

Around the time that Hitler and the Nazi party were coming to power in 1933, German-born Max Keith (pronounced “Kite”) took over Coca-Cola’s German subsidiary, Coca-Cola Deutschland, GmbH.  Mark Pendergrast, author of For God, Country, and Coca-Cola, writes that Keith “valued his allegiance to the drink and to the company more than his allegiance to his own country”.  He had no qualms about doing business with every aspect of German society, including Nazi party members.

Bizarre though it may sound to the modern ear, a number of famous Americans and companies were involved with the European fascist regimes of the 1930s, including William Randolph Hearst, Joseph Kennedy (JFK’s father), Charles Lindbergh, John Rockefeller, Andrew Mellon (banker, head of Alcoa, and Secretary of the Treasury), DuPont, General Motors, Standard Oil (now Exxon), Ford, ITT, Allen Dulles (later head of the CIA), Prescott Bush, National City Bank, General Electric, and many in Hollywood.

In Atlanta, Coca-Cola President Robert Woodruff was no exception.  Woodruff himself attended the 1936 Berlin Olympics, alongside banners depicting the company logo, with the slogan  “Ein Volk, ein Reich, ein Getrank – A People, an Empire, a Drink”.

Woodruff used a 10th anniversary party for Coca-Cola GmbH to organize a mass Nazi salute in honor of Hitler’s 50th birthday, declaring that it was “to commemorate our deepest admiration for our Fuhrer.”

On January 20, 1940, Winston Churchill urged neutral nations to oppose the Nazi war machine, warning that, “Each one hopes that if he feeds the crocodile enough, the crocodile will eat him last.”  Meanwhile in Germany, Coca Cola was the undisputed king of the domestic soft drink market.

That changed a year later, with the Japanese attack on Pearl Harbor, and the German declaration of war on the United States.

American entry into WW2 meant that American companies ceased business with axis powers, while the German government threatened to seize “enemy owned” businesses.  Max Keith was cut off from all communications with Coca-Cola headquarters in Atlanta, and in danger of the Nazi party nationalizing his beloved company.  As shipments of Coca-Cola’s mythical “7X’ syrup, dried up, Keith had to come up with a substitute for the domestic soft drink market.  Schnell.

With wartime rationing already in effect, Keith and his chemists worked with what was available.  Leftovers from other food industries, apple fibers, fruit peelings, beet sugar  and whey, the liquid left over when milk was curdled and strained off to make cheese.

The result was “Fantasievoll”, “Fantastiche” (“Imaginative”, “Fantastic”).  So it is that the soft drink “Fanta”, was borne of the wartime necessities of Nazi Germany.

Coca-Cola GmbH had concocted a sweet, slightly cheesy tasting soft drink, and the German market responded. Sales rose steadily throughout the war, particularly as alternatives became increasingly scarce. People didn’t just drink the stuff, either. With sweeteners of all kinds strictly rationed, Fanta made its way into baked goods, soups and a variety of foodstuffs. By 1943, Fanta sales reached almost three million cases.

Tristan Donovan, author of the book Fizz: How Soda Shook Up the World, writes “It was Fanta or nothing”. Pendergrast writes that there’s little doubt that Keith did business with Nazis, but he was more company guy than idealogue. “You could not do business inside of Nazi Germany unless you collaborated with them,” wrote Pendergrast. “There’s no question he was a Nazi collaborator. [But] he was not a member of the Nazi party. His allegiance was to Coca-Cola, not to Hitler.”

When American troops liberated Germany in the summer of 1945, legend has it that they found Keith in a half-bombed out factory, still bottling the stuff.

Fun fact: Hitler and his henchmen didn’t call themselves “Nazis”, in fact the term was frowned upon. They were the “NSDAP”, the Nazionale Socialistiche Deutsche Arbaits Partai, (National Socialist German Workers Party), the original abbreviation forwhich, was “Nasos”. The word “Nazi” derives from a Bavarian term meaning “simple minded” and was first used as a term of derision by journalist Konrad Heiden. The term was adopted by Anti-NSDAP’ers and Allied troops after war broke out, and the name stuck.

Despite being on the losing side, Keith was hailed as a hero back in Atlanta. The man who kept the company alive, in Germany. Vice President of Sales Harrison Jones called Keith a “great man”.  He was given control of Coca-Cola, in all of Europe. 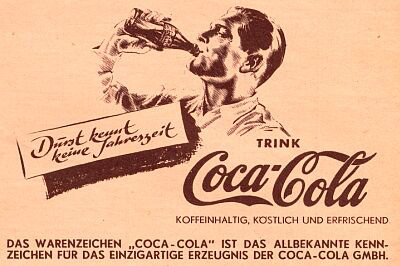 In April 1955, Coca-Cola reintroduced Fanta as an orange drink. Starting in Italy, the product made its way to the United States, in 1958. The name stuck, and why not. The company already owned the copyright.

In 2012, Fanta saw the strongest sales growth of the top 10 brands, the third Coke branded product to surpass 2 billion in case sales. Today, more than 100 flavors of Fanta are sold around the world, where customers from Latin America to Africa, to Europe, Brazil and China can say,  “Es ist die Reale Sache”.  It’s the Real Thing.