In the 1860s and 70s, one “ferocious old harridan” called “Miss Piggott” operated a saloon and boarding house, in San Francisco. She’d maneuver unsuspecting guests over a trap door before serving them her “Miss Piggott Special” a potion consisting of equal parts brandy, whiskey and gin laced with laudanum or opium. One knock on the head with her “bung starter”, a wooden mallet used to open whiskey kegs, and she’d pull the lever and down they would fall, to the mattress waiting below.

In modern times, governments have employed various strategies to meet the personnel needs of national armed services. Recruiting methods range from voluntary to compulsory service, and even a lottery or other form of draft, in times of national emergency.

During the age of sail, vast numbers of skilled and unskilled seamen alike, were required to meet the needs of naval vessels at sea. Governments resorted to more straightforward methods of meeting manpower requirements, namely, kidnapping.

Such involuntary service or “impressment”, was first made legal during Elizabethan times, but the practice dates back to the 13th century.

“Press gangs” would patrol waterfronts looking for vagrants, raiding taverns and even pouncing on unsuspecting victims in their beds. Prints from the time show armed gangs barging into weddings and hauling the groom away, much to the dismay of the bride.
Such “pressing” more often took place at sea, where armed gangs would board merchant ships and take what they needed, sometimes leaving victims without sufficient hands to take them safely back to port.

Such methods were essential to the strength of the British Navy, particularly during the Napoleonic wars. American merchant vessels were often targets. The British Navy impressed over 15,000 American sailors alone, between 1793 and 1812.

The American public was outraged and there were calls for war in 1807, when HMS Leopard overtook the USS Chesapeake, kidnapping three American-born sailors and one British deserter, leaving another three dead and 18 wounded.

This time, American retaliation took the form of an embargo. Five years later, continued impressment of American seamen would be a major cause of the war of 1812, the conflict formally ending this day in 1814. 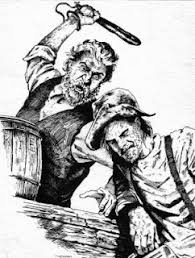 Outside of the British Royal Navy, the practice of kidnapping people to serve as shipboard labor was known as “crimping”. Low wages combined with the gold rushes of the 19th century left the waterfront painfully short of manpower, skilled and unskilled, alike. “Boarding Masters” had the job of putting together ship’s crews, and were paid for each recruit. There was strong incentive to produce as many able bodies, as possible. Unwilling men were “shanghaied” by means of trickery, intimidation or violence, most often rendered unconscious and delivered to waiting ships, for a fee.

Crimps made $9,500 or more per year in the 1890s, equivalent to over a quarter-million, today. The practice flourished in British port cities like London and Liverpool, and in the west coast cities of San Francisco, Portland, Astoria and Seattle. You certainly didn’t want to be caught out alone and drunk, in east coast port cities like New York, Boston, Philadelphia, or Baltimore.

James Kelly kept several bars and a boarding house, in San Francisco. Better-known as “Shanghai” Kelly, the man provided a steady stream of the unwilling to labor aboard the undermanned ships of the San Francisco waterfront.

He once shanghai’d 100 guys, in a single evening.

In the early 1870s, Kelly rented the paddleboat Goliath, and widely publicized a free booze cruise to celebrate his birthday. Bartenders drugged unwitting revelers with opium-laced whiskey, and then offloaded them to waiting ships. Shanghai Kelly’s biggest concern was returning after such a public event, with an empty boat. His luck held, when another paddle wheel steamer, the Yankee Blade, struck a rock and began to sink. Goliath rescued everyone on board, and continued the party. Nobody back at the waterfront, noticed a thing.

Joseph “Bunko” Kelley was another infamous crimp, also working out of the San Francisco waterfront. The “King of Crimps”, Kelley once set a record, rounding up 50 guys in three hours. The Bunko name stuck, when Kelley delivered one crewman for $50, who turned out to be a cigar store Indian. In 1893, Kelley delivered 22 guys who’d mistakenly consumed embalming fluid, from a local mortuary. He sold all of them for $52 apiece though most of them were dead, a fact to which the ship’s captain only became wise, after returning to sea.

The “Shanghai tunnels” of Portland run through the Old Town/Chinatown section to the main business district, connecting the basements of hotels and taverns to the waterfront at the Willamette River. The tunnels themselves are real enough, though their history is shrouded in mystery. Originally constructed to move goods from the Willamette waterfront to basement storage areas, the number of unconscious bodies hustled down the dark chambers of the Portland Underground”, remains unknown. There are those who will tell you, the practice continued into the WW2 period.

State and federal legislatures passed measures to curb the practice after the Civil War, but crimping didn’t go away, easily. In their heyday, the owners of sailor’s boarding houses had endless supplies of manpower, fanning out across polling places to “vote early and often”.

San Francisco political bosses William T. Higgins, (R) and Chris “Blind Boss” Buckley (D) were both notable crimps, and well positioned to look after their political interests. Notorious crimps such as Joseph “Frenchy” Franklin and George Lewis were elected to the California state legislature. There was no better spot, from which to ensure that no legislation would interfere with such a lucrative trade.

In the 1860s and 70s, one “ferocious old harridan” called “Miss Piggott” operated a saloon and boarding house, in San Francisco. She’d maneuver unsuspecting guests over a trap door before serving them her “Miss Piggott Special” a potion consisting of equal parts brandy, whiskey and gin laced with laudanum or opium. One knock on the head with her “bung starter”, a wooden mallet used to open whiskey kegs, and she’d pull the lever and down they would fall, to the mattress waiting below.

Imagine the hangover the next morning, to wake up and find you’re now at sea, bound for somewhere in the far east. Regulars knew about the trap door and avoided it at all costs, knowing that anyone going over there, was “fair game”.

Widespread adoption of steam power in the late 19th and early 20th centuries did as much to curb shanghaiing as did any legislative effort. Without acres of canvas to furl and unfurl, the need for unskilled labor was greatly diminished. The “Seaman’s Act of 1915”, sometimes called the “magna carta of sailor’s rights,” ended the practice for good.

You might want to do yourself a favor, though, and look out for that trap door.