Barracks were built on pilings to discourage tunneling, creating 24” of open space beneath the buildings. Seismic listening devices were placed around the camp’s perimeter. In the German mind, the place was the next best thing, to airtight. “Kriegies” didn’t see it that way.

Stalag Luft III in the province of Lower Silesia was a German POW camp, built to house captured Allied airmen.  The first “Kriegsgefangene” (POWs), arrived on March 21, 1942. The facility would grow to include 10,949 “kriegies”, comprising some 2,500 Royal Air force officers, 7,500 US Army Air officers, and about 900 from other Allied air forces.

A Trojan horse was more like it. Every day, the horse would be lugged out to the perimeter. Above ground, prisoners’ gymnastic exercises masked the sound, while underground, kriegies dug with bowls into the sand, using the horse itself to hide diggers, excavated soil and tools alike. Iron rods were used to poke air holes to the surface.  There was no shoring of the tunnel, except at the entrance.

For POWs of officer rank, escape was the first duty.  Bushell escaped twice and almost made it, but each time his luck deserted him. By October, Roger Bushell found himself in the north compound of Stalag Luft III, where British officers were held. 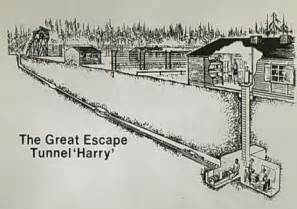 By the following spring, Bushell had concocted the most audacious escape plot in WWII history. “Everyone here in this room is living on borrowed time”, he said. “By rights we should all be dead! The only reason that God allowed us this extra ration of life is so we can make life hell for the Hun… In North Compound we are concentrating our efforts on completing and escaping through one master tunnel. No private-enterprise tunnels allowed. Three bloody deep, bloody long tunnels will be dug – Tom, Dick and Harry. One will succeed!”

The effort was unprecedented. Previous escape attempts had never involved more than twenty. Bushell, soon to be known by the code name “Big X” was proposing to get out with 200.

Six hundred prisoners were involved in the construction.  200 with sacks sewn under greatcoats made 25,000 trips into the prison yard, disposing of soil as Tom, Dick and Harry were excavated.  30′ down and only 2 ft. square, the three tunnels extended outward for a football field and more.

These “penguins” were running out of places to put all that soil, around the time the camp was expanded to include “Dick’s” originally planned exit point.  From that time forward, “Dick” was refilled from the other two.  “Tom” was discovered in September 1943, the 98th tunnel in the camp to be found out.

The escape was planned for the good weather of summer, but a Gestapo visit changed the timetable.  “Harry” was ready by March.   The “Great Escape” was scheduled for the next moonless night.  73 years ago – March 24,  1944.

Contrary to the Hollywood movie, no Americans were involved in the escape.  At that point none were left in camp.

The escape was doomed, almost from the start.  First the door was frozen shut, then a partial collapse had to be repaired.  The exit came up short of the tree line, further slowing the escape.  It was over when guards spotted #77 coming out of the ground.

In the end, only three of the 76 made it to freedom:  two Norwegian and one Dutch pilot.  Hitler personally ordered the execution of the other 73, 50 of which were carried out.

General Arthur Nebe is believed to have personally selected the 50 for execution.  He was later involved with the July 20 plot to assassinate Adolf Hitler, and executed on March 21, 1945.  Roger “Big X” Bushell and his partner Bernard Scheidhauer were caught while waiting for a train at the Saarbrücken railway station.  They were murdered by members of the Gestapo on March 29, who were themselves tried and executed for war crimes, after the war.

Dick Churchill was an HP.52 bomber pilot and RAF Squadron Leader.  One of the 76 who escaped, Churchill was recaptured three days later, hiding in a hay loft.  In a 2014 interview, he said he was fairly certain he’d been passed over for execution, because his captors thought he might be related to Prime Minister Winston Churchill.  Today, Dick Churchill, age 97, is the only man among those 76, still left alive.