Only hours from now, families will gather from across the nation, for the Christmas table.  There will be moist and savory stuffing, and green bean casserole.  Creamy mashed potatoes and orange cranberry sauce.  And there, the centerpiece of the feast.  Slow-roasted and steaming in its tray, golden brown and delicious, the roast hippopotamus.

On this day in 1884, the World Cotton Centennial and World’s Fair was beginning its second week, in New Orleans. Among the many wonders on display was the never-before seen, Eichornia crassipes, a gift of the Japanese delegation.  The Water Hyacinth.

The seeds of Eichornia crassipes are spread by wind, flood, birds and humans, and remain viable for 30 years.  Beautiful as it is to look at, the Water Hyacinth is an “alpha plant”, an aquatic equivalent to the Japanese invasive perennial Kudzu, the “vine that ate the south”.  Impenetrable floating mats choke out native habitats and species, while thick roots impede the passage of vessels, large and small.  The stuff is toxic if ingested by humans and most animals, and costs a fortune to remove.

This plant native from the Amazon basin quickly broke the bounds of the 1884 World’s Fair, spreading across the bayous and waterways of Louisiana, and beyond. 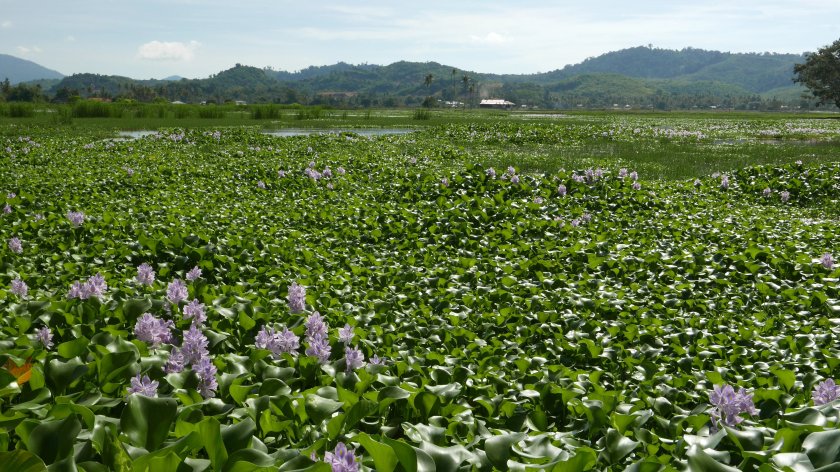 During the first decade of the 20th century, an exploding American population could barely keep up with its own need for food, especially, meat.  The problem reached crisis proportions in 1910, with over grazing and a severe cattle shortage.  Americans were seriously discussing the idea, of eating dogs.

Enter Louisiana member of the House of Representatives, New Iberia’s own Robert Foligny Broussard, with a solution to both problems.  “Lake Bacon”.

The attorney from Louisiana’s 3rd Congressional district proposed the “American Hippo” bill, H.R. 23621, in 1910, with enthusiastic support from Theodore Roosevelt and the New York Times.  One Agricultural official estimated that such a free-range hippo herd would produce up to a million tons of meat, per year.

Lippincott’s monthly magazine, waxed rhapsodic:  “This animal, homely as a steamroller, is the embodiment of salvation.  Peace, plenty and contentment lie before us, and a new life with new experiences, new opportunities, new vigour, new romance, folded in that golden future, when the meadows and the bayous of our southern lands shall swarm with herds of hippopotami”.

With a name deriving from the Greek term “River Horse”, the common hippopotamus is the third largest land animal living today.  Despite a physical resemblance to hogs and other even-toed ungulates, Hippopotamidae’s closest living relatives are cetaceans such as whales, dolphins and porpoises.

All well and good.  The problem is, these things are dangerous.

The adult bull hippopotamus is extremely aggressive, unpredictable and highly territorial.  And heaven help anyone caught between a cow, and her young.  Hippos can gallop at short sprints of 19 mph, only a little slower than Jamaican Sprinter Usain Bolt, “the fastest man who ever lived”.

To search the “10 most dangerous animals in Africa” is to learn that hippos are #1, responsible for more human fatalities than any other large animal, in Africa.

Be that at it as it may, the animal is a voracious herbivore, spending daylight hours at the bottom of rivers & lakes, happily munching on vegetation.

What could be better than taking care of two problems at once.  Otherwise unproductive swamps and bayous from Florida to Louisiana would become home to great hordes of free-range hippos.  The meat crisis would be solved.  America would become a nation of hippo ranchers.

As Broussard’s bill wended its way through Congress, the measure picked up steam with the enthusiastic support of two men, mortal enemies who’d spent ten years in the African bush, trying to kill each other. No, really.

Frederick Russell Burnham had argued for the introduction of African wildlife into the American food stream, some four years earlier.  A freelance scout and American adventurer, Burnham was known for his service to the British South Africa company, and to the British army in colonial Africa. The “King of Scouts’, commanding officers described Burnham as “half jackrabbit and half wolf”.  A “man totally without fear.”  One writer described Burnham’s life as “an endless chain of impossible achievements”, another “a man whose senses and abilities approached that of a wild predator”.  He was the inspiration for the Indiana Jones character and for the Boy Scouts.  Frederick Burnham was the “most complete human being who ever lived “. 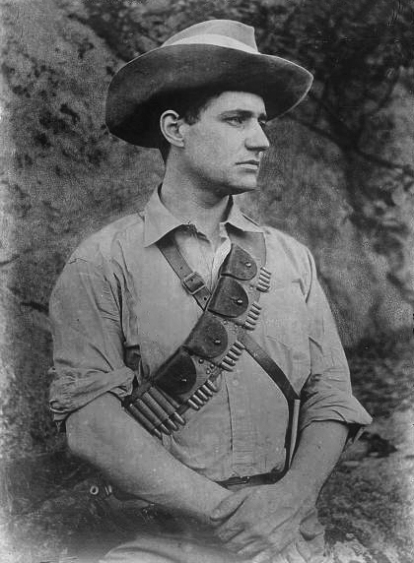 Frederick “Fritz” Joubert Duquesne was a Boer of French Huguenot ancestry, descended from Dutch settlers to South Africa.  A smooth talking guerrilla fighter, the self-styled “Black Panther” once described himself as every bit the wild African animal, as any creature of the veld.  An incandescent tower of hate for all things British, Duquesne was a liar, a chameleon, a man of 1,000 aliases who once spent seven months feigning paralysis, so he could fool his jailers long enough to cut through his prison bars.

Duquesne was destined to be a German spy and saboteur, through two world wars.  Frederick Burnham described his mortal adversary, thus:  “He was one of the craftiest men I ever met. He had something of a genius of the Apache for avoiding a combat except in his own terms; yet he would be the last man I should choose to meet in a dark room for a finish fight armed only with knives“.

During the 2nd Boer war, the pair had sworn to kill each other.  In 1910, these two men became partners in a mission to bring hippos, to America’s dinner table.

Biologically, there is little reason to believe that Hippo ranching couldn’t have worked along the Gulf coast.  Colombian officials estimate that, within a few years, the hippo descendants of drug kingpin Pablo Escobar’s exotic animal menagerie will number 100 or more individuals. 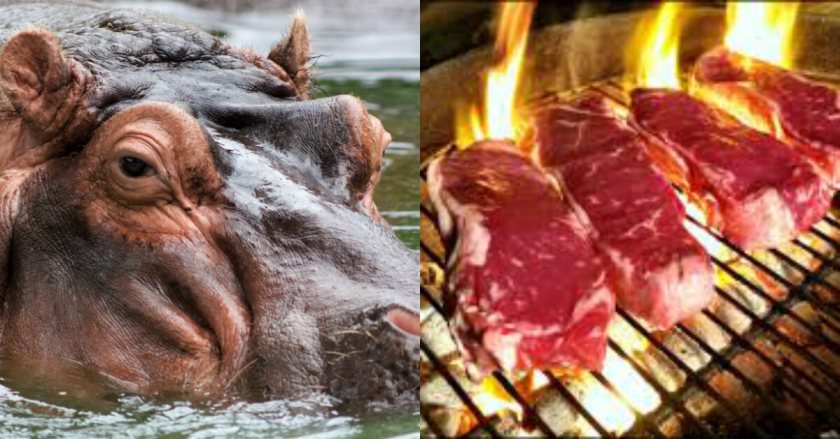 Broussard’s measure went down to defeat by a single vote, but never entirely went away.  Always the political calculator, Representative and later-Senator Broussard died with the bill on his legislative agenda, waiting for the right moment to reintroduce the thing.

Over time, the solution to the meat question became a matter of doubling down on what we’re already doing, as factory farms and confinement operations took the place of free ranges, and massive use of antibiotics replaced the idea of balanced biological systems.

We may or may not have “traded up”.  Today, we contend with ever more antibiotic-resistant strains of “Superbug”. Louisiana spends $2 million per year on herbicidal control of the water hyacinth. The effluent of factory farms from Montana to Pennsylvania works its way into the nation’s rivers and streams, washing out to the Mississippi Delta to a biological dead zone, the size of New Jersey.

That golden future of Lippincott’s hippo herds roam only in the meadows and bayous of the imagination.  Who knows, it may be for the best.  I don’t know if any of us could’ve seen each other across the table, anyway.  Not when the roast hippopotamus, got there.