The forgotten angel of Bastogne was eighty-six when the knock came on the door of that Belgian nursing home.  It took months for the Scottish historian to coax the story out of her.

The Battle of the Bulge is a familiar tale: The massive German offensive bursting out of the frozen Ardennes forest on December 16, 1944. The desperate drive to capture the Belgian port of Antwerp, vital to German re-supply efforts.

The terrain was considered unsuitable for such an attack. The tactical surprise was complete, British and American forces separated and driven back, their positions forming an inward “bulge” on wartime battle maps.

The story of the “Battered Bastards” is likewise, well known. 22,800 Americans, outnumbered five to one in some places and surrounded, in the do-or-die fight to hold the indispensable crossroads, of Bastogne. The German demand to surrender, of December 22. The response from American General Anthony McAuliffe, the one word response, “Nuts”, the American slang, confusing to the German delegation.

The siege of Bastogne would last another four days, the German encirclement at last broken by elements of George S. Patton’s 3rd Army. By the end of January, the last great effort of German arms was spent and driven back behind original lines. 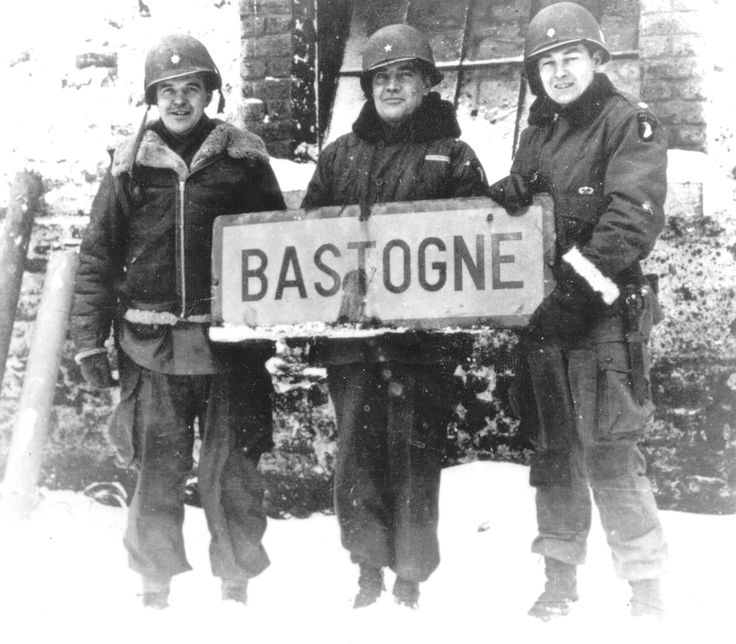 Historian Stephen Ambrose wrote “Band of Brothers” nearly fifty years later, a non-fiction account later broadcast as an HBO mini-series, of the same name. The story refers to a black nurse named Anna. There is a brief appearance and then she is gone. No one knew who Anna was, or even if she was real.

Sixty-one years after Bastogne, military historian Martin King was conducting research for a book, Voices of the Bulge.  The knock on the door came in October 2007, in a geriatric home outside of Brussels.

In the months following the Great War, Henri Chiwy (pronounced “SHE-wee”) was a veterinarian, working in the Belgian colony of the Congo Free State. The name of the Congolese woman who bore his child is unrecorded, the name of their baby girl, Augusta Marie.

Augusta Chiwy came back to Belgium when she was nine, one of the luckier of thousands born to European fathers, and African mothers. Back to the doctor’s home in Bastogne, a small town of 9,000 where Augusta was loved and cared for by her father and his sister, whom the girl knew as “aunt Caroline”.

Augusta was educated and raised a Catholic. She always wanted to teach but, due to the rancid racial attitudes of that time and place, it would not do to have a black woman teaching white children. She became a nurse instead, on the advice of her father and his brother, a well-known Bastogne physician.

Nursing school was about 100 miles north. Augusta became a qualified nurse in 1943 and returned home the following year for Christmas. She arrived on December 16, the day Adolf Hitler launched his surprise offensive.

Bastogne was soon surrounded, part of one of the fiercest and bloodiest battles, of WW2. Poorly equipped American GIs were outnumbered five to one. These guys didn’t even have winter uniforms.

US Army Doctor Jack Prior was desperate, the abandoned building serving as military aid station, home to some 100 wounded GIs. Thirty of those were seriously wounded. With virtually no medical equipment or medicine and the only other medical officer an Ohio dentist, Dr. Prior badly needed nursing help.

Augusta Chiwy did not hesitate to volunteer, knowing full well that she would be executed, if caught.

Working conditions were grisly in the weeks that followed. With no surgical instruments and no anesthesia, amputations and other procedures were performed with an army knife, with cognac to dull the patient’s pain. On Christmas eve, a direct hit from a 500-pound bomb hit one hospital building, instantly killing dozens of wounded GIs and the only other nurse, Renée Lemaire.  She would be remembered as “The Angel of Bastogne.” 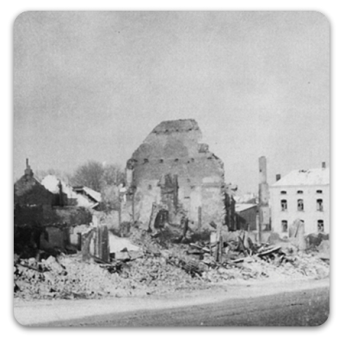 Augusta Chiwy was in a neighboring building at the time. The explosion blew the petite nurse through a wall but, unhurt, she picked herself up and went back to work.  There were grisly injuries and many died due to inadequate medical facilities, but many lived, their families reunited thanks to the tireless work of Dr. Jack Prior, and nurse Augusta Chiwy.

Given the month of hell the pair had been through, Augusta was heartbroken when Dr. Prior had to move out, in January.  The pair exchanged addresses and stayed in touch, writing letters and exchanging small gifts, of candy.  They last saw each other in 2004, when Dr. Prior returned from his home state of Vermont, for the 50th anniversary of the Battle of the Bulge.

Augusta Chiwy suffered symptoms of post-traumatic stress disorder, a condition poorly understood at that time.  She would go long periods without speaking, becoming quiet and withdrawn even years later.  She married a Belgian soldier in 1959 and the couple had two children.  It would be twenty years, before  she resumed her nursing career.  She almost never spoke of her experience in Bastogne.

The forgotten angel of Bastogne was eighty-six when the knock came on the door of that Belgian nursing home.  It took months for the Scottish historian to coax the story out of her.

Thanks to King’s efforts, Augusta Chiwy would finally receive the recognition she had earned. 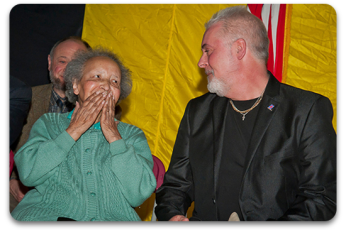 Albert II of Belgium. Six months later she received the U.S. Army’s Civilian Award for Humanitarian Service. And on March 21, 2014, Augusta was recognized by her hometown as a Bastogne Citizen of Honor”.  http://www.augustachiwy.org

When asked about her heroism, she’d always say the same thing: “I only did what I had to do.”

Augusta Marie Chiwy died peacefully in her sleep at the age of 94, on August 23, 2015. How many lives would have been cut short, will never be known.  But for the selfless and untiring efforts, of the Forgotten Angel of Bastogne.

Hat tip to http://www.augustachiwy.org, for most of the images used in this essay