If you want a fun read sometime, download the constitution of the Islamic Republic of Iran. Khomeini is personally named in the document. Three times. 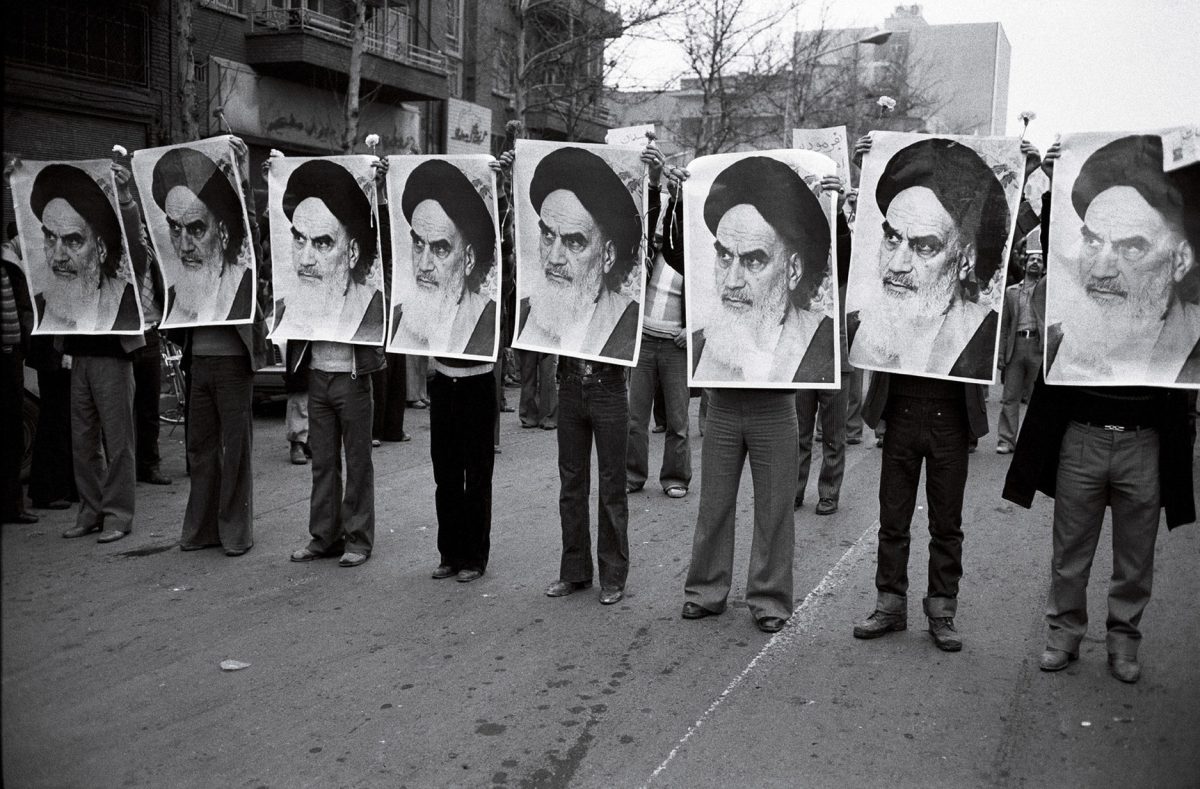 Ruhollah Mousavi, the name translates as “inspired of God”, was born in the Iranian village of Khomein, on September 24, 1902. Born into a family of Shi’ite religious scholars, Mousavi was raised by his mother and aunt after his father was murdered while the boy was still an infant. The mother and the aunt died in a cholera outbreak when he was 16. After that, the boy was raised by his brother, Seyed Mourteza.

The family claimed to be directly descended from Muhammad, and both brothers were avid religious scholars, attaining the status of Ayatollah: Shi’ite scholars of the highest knowledge.

As King of Persia (Iran) since the 1920s, Rezā Shāh Pahlavi weakened the powers of religious leaders and pushed for a more secularized country.  Pahlavi’s reign was largely a force for modernization, but was often despotic, and failure to modernize a large peasant population did much to pave the way for Iranian Revolution.

Mohammad Reza Pahlavi came to power in 1941, following the Commonwealth/Soviet invasion of the Empire of Iran which forced the abdication of his father.

The years following WW2 saw a “growing nationalist mobilization against foreign domination” across the Middle East. In Iran, increasingly politicized Shiʿite “Islamic Fundamentalist” sentiment took the form of the Fadā’iyān-e Islam, literally “Self-Sacrificers of Islam”, an activist organization founded by theology student Navvab Safavi and dedicated to “purifying” Islam through the assassinations of leading intellectual and political leaders.

In the early ’50’s, secular Prime Minister Mohammad Mosaddegh enjoyed an alliance of convenience with the hard-liner Kashani, mentor to the future Ayatollah Khomeini, at the same time seeking to blunt the political power of the Shah, believing that the Persian King should “reign, but not rule” in the manner of the constitutional monarchies of Europe.

In 1901, Mozzafar al-Din Shah Qajar, King of Persia, granted a 60-year petroleum search concession to British investor William Knox D’Arcy for £20,000, equivalent to $166 million in 2016. By the WW2 period, support was building for state control of foreign-owned oil assets, many believing such policies to be the way forward to greater wealth and self-determination. Mossadegh attempted to negotiate a 50/50 split of oil profits, but the British controlled Anglo-Iranian Oil Company (AIOC) balked.

Contrary to the American position at that time, the UK government began plans to undermine and overthrow the Iranian government.

AIOC refusal to submit to audit of its books led to the “Nationalization Crisis” of 1951, and the near-unanimous vote in the majlis to nationalize Iranian oil assets. Foreign oil executives were expelled from the country, the British government enforcing an Iranian oil embargo while Prime Minister Mossadegh talked of a “cruel and imperialistic country” stealing from a “needy and naked people.”

With the United States fighting a war in Korea, the American government was deeply entrenched in a cold war mindset. Mossadegh had lost the support of Islamist hardliners by this time, for his failure to move the nation toward sharia-based theocratic government.

The communist-supporting Tudeh party began to infiltrate the Iranian military, persuading American Secretary of State John Foster Dulles that the Iranian government was “falling” to the Soviet Union.

Before long, economic and political isolation severely weakened the Mossadegh government, as the American government switched sides on the question of Iranian overthrow. Two UK/US-backed coup attempts followed in 1953, along with the temporary expulsion of the Shah. The government was done for good that August. Mohammad Mossadegh was sentenced to death but the sentence was never carried out.  He spent the rest of his life under house arrest and died in Tehran, in 1967.

Ayatollah Khomeini had formed very different views by this time from those of his teachers, concerning the separation of church and state. Khomeini dedicated himself to teaching, cultivating a group of dedicated students who would one day become his staunchest supporters. By the time of JFK’s election to the Presidency, Shi’ite Iranians regarded Khomeini as “Marja-e Taqlid”. A person to be imitated.

Khomeini gained prominence in 1962, opposing a law which would remove the requirement that elected officials be sworn in on the Qu’ran. In 1963, he gave a speech suggesting the Shah could leave if he didn’t like the political direction of the country, a speech which earned him a stay in prison. 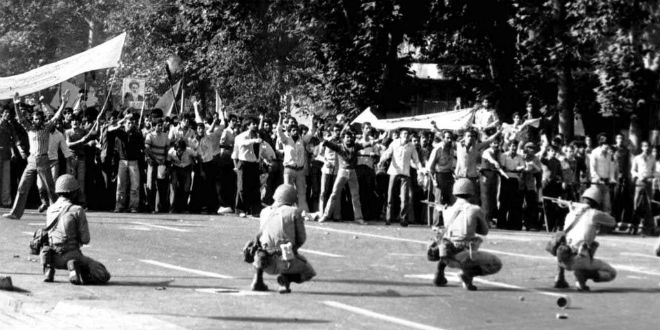 Khomeini was arrested again in 1964, after pronouncing his belief that Jews would take over Iran, and that the US considered all Iranians to be little more than slaves. Khomeini was deported to Turkey, later taking up residence in Iraq because Turkish law prevented him from wearing the traditional clothes of a Shi’ite cleric and scholar.

During his years in exile, Khomeini developed his ideas on the structure of an Islamic state, which he called “Velayat-e faqeeh”. He would lecture on his religious theories, videotapes of which were smuggled into Iran and sold at bazaars, making Khomeini the leader of Iranian opposition to the Shah’s government.

Military force had to be called out in 1975, to dispel crowds at a religious school in Qom. Khomeini declared it the beginning of “Freedom and liberation from the bonds of imperialism”. By this time Khomeini was too hot to handle even for the Iraqis, and he moved to Paris. It was only a few short months before his triumphant return.

Thousands were killed in riots and demonstrations throughout 1978, which the Shah first tried to quell, and later to embrace. “As Shah of Iran as well as an Iranian citizen”, Pahlavi said on November 5, “I cannot but approve your revolution”. 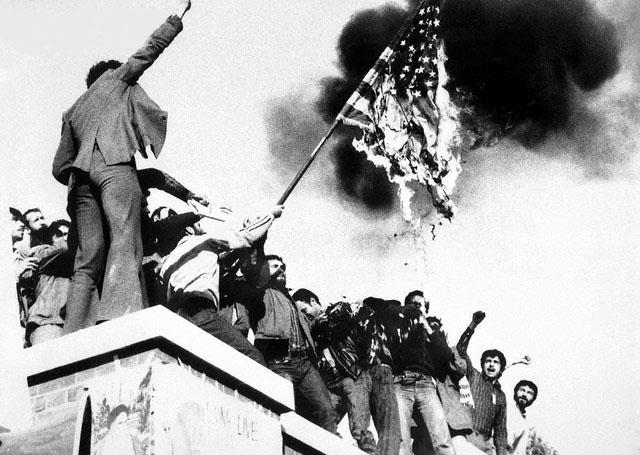 It was too little, too late. Weeks later the Shāhanshāh, the “King of Kings”, left his country for good.

Khomeini re-entered Iran in February, as the Shah went from country to country, looking for a place to stay. With the now-former King of Kings suffering from a form of non-Hodgkins Lymphoma, President Jimmy Carter reluctantly allowed the Shah into the US for surgery.

Pahlavi left for Panama less than two weeks later, as “Grand Ayatollah” Khomeini denounced what he saw as an American plot. Student followers of the Ayatollah stormed the American embassy on November 4 and seized 90 hostages. 13 women and Americans of African ancestry were later released as was Richard Queen, a white man sick with Multiple Sclerosis. The remaining 52 hostages would be 444 days in captivity, paraded before television cameras in blindfolds as Khomeini denounced “The Great Satan”. 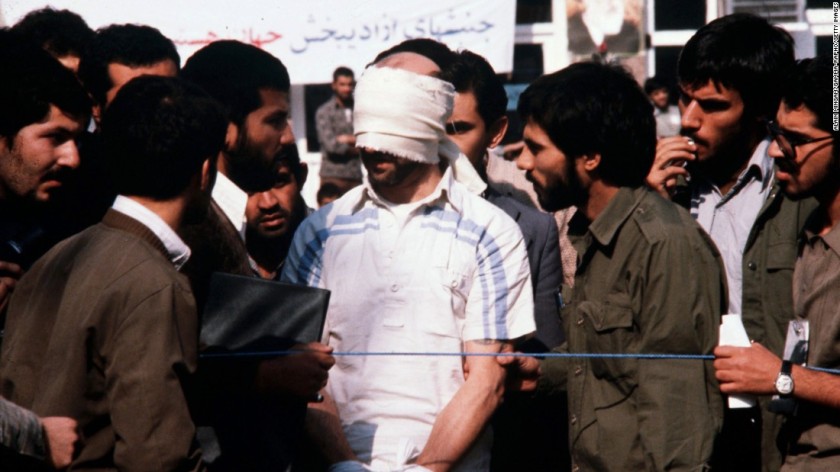 The Iranian constitution of 1906 was supplanted by popular referendum on this day in 1979, when Ayatollah Ruhollah Khomeini was proclaimed rahbar-e mo’azzam-e irān, Supreme Leader of the Islamic Revolution.

The US attempted a rescue on April 24, 1980. “Operation Eagle Claw” ended in collision between aircraft and the death of eight American servicemen, an Iranian civilian, and the destruction of two aircraft.

Aside from some of the most dismal economic conditions in American history, the Iranian hostage crisis did more than anything else to doom the Carter Presidency, to a single term.

Iranian revolutionaries wanted the Shah to stand trial for atrocities committed by his secret police, the SAVAK, but the Islamic Republic of Iran would easily match the worst of the Shah’s reign when it came to brutality.

Ayatollah Ruhollah Khomeini is gone now, but his influence is very much alive. If you want a fun read sometime, download the constitution of the Islamic Republic of Iran. Khomeini is personally named in the document. Three times.

A 2007 article in The Economist calls the authenticity of this quote into question, noting that the Mullahs like to build up bank accounts in Dubai and Switzerland, behavior hardly consistent with such an apocalyptic world view.

The American State Department designated the Islamic Republic of Iran a state sponsor of terrorism in 1984, a classification which holds, to this day.  As the previous administration saw fit to fly three planeloads of cash on pallets into the Islamic Republic for a total of $1.3 Billion, it would be nice to settle the authenticity question on that Khomeini quote, once and for all.