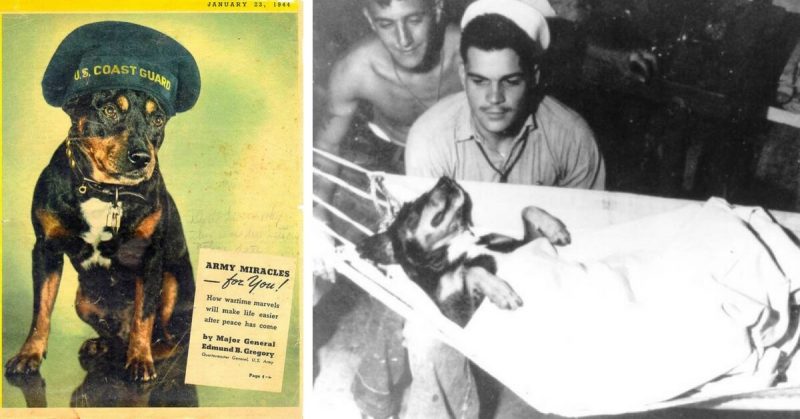 In times of peace, the United States Coast Guard is charged with protecting the security of the nation’s borders, maritime law enforcement and rescue operations. One of seven uniformed military service branches, Coast Guard operations may be expanded in time of conflict, or by order of the Commander-in-Chief.

During WW2, the Coast Guard operated hundreds of vessels from patrol frigates to troop ships, performing convoy escort, anti-submarine and replenishment operations. Many of the landing craft used in amphibious operations were operated by Coast Guardsmen. There may be no group in the employ of the United States government, better qualified to navigate the shoals, surf and strong currents encountered by small boats, in shallow water. 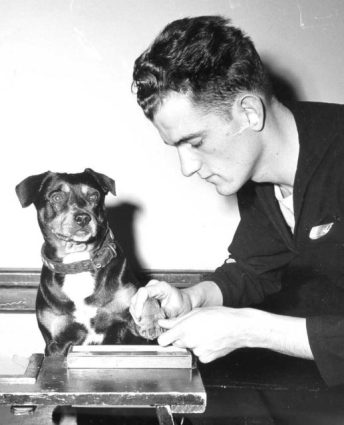 In the winter of 1937, the Coast Guard cutter USCGC George W. Campell steamed out of New York harbor, patrolling the east coast with a mission of life-saving and national defense. The night before, Chief Boatswain’s Mate A. A. “Blackie” Roth (the name is also given as “Rother”) had given his girlfriend, a puppy. She couldn’t keep him, the landlord wouldn’t allow it. No other crewman could take the small dog. It was either leave him astray and hope for the best, or smuggle the puppy on board.

The Captain addressed the assembled crew on the first day of the cruise. Oh, to have been a fly on the wall, when one of them, barked back.

They called him “Sinbad”, and gave him a uniform, a service record and a rank.  Dog, 1st class.

Sinbad quickly learned ship’s routine, and often “racked” with other sailors.  He could always be found near the galley knowing that’s where the food comes from, and he loved himself a cup of black coffee. 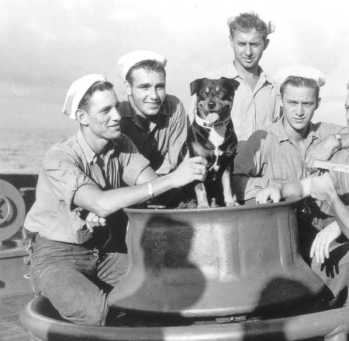 Sinbad’s favorite toys were the large metal washers which he’d hide, until someone came to play with him.  They even built him a hammock, much more comfy to sleep in, in those long Atlantic swells.

Sinbad was possessed of the best qualities of the sailor and of his own kind, and of the worst.  In 1940, he nearly set off an international incident.

With the dark clouds of WW2 already over Europe, Denmark was overrun and occupied, by Nazis.  Greenland was once a Danish territory, and the allies hoped to keep the place out of German hands.  Campbell was sent to secure diplomatic ties with the Danes and the Greenlanders, who lived there.

Greenland is thinly populated, a place where locals mainly fish and raise sheep, for a living.  On shore for a week, Sinbad was quick to discover the pastures and the great fun of chasing sheep.  The sheep themselves were not amused and some died of exhaustion. Others became too nervous to go out and eat.  The owners weren’t amused either, and one demanded that Sinbad be shot.

The captain thought that too severe a punishment and Sinbad was banished, never to set foot on Greenland, again.  There was no end of amusement among the crew of the Campbell, that Sinbad had been brought before a Captain’s mast. It would not be his last.

When war came, the cutter was transferred to the Navy, and the patrols became longer.

In the winter of 1943, Campbell was assigned to convoy protection, defending the vital north Atlantic supply route from roving “wolf packs” of German submarines.  Sinbad never did get used to the sound of gunfire or depth charges, and would hide below decks, his paws over his ears.  On February 22, the German submarine U-606 unleashed a barrage of torpedoes, against an allied convoy.

A day-long game of cat & mouse ensued in which the sub would pop up for another attack, only to be swarmed and driven into yet another crash dive.  A periscope was spotted at 7:26 pm and Campbell charged in with a string of depth charges, colliding with the sub at the end of the run.  U-606 was destroyed and Campbell badly damaged, disabled and without power, due to flooding.

All but “essential personnel” were evacuated.    Captain James Hirschfield felt that Sinbad was good luck.  No harm could befall the cutter while he was on board, and so he remained, essential personnel, taken under tow for repairs by the Polish destroyer, Burza.  Sinbad had remained on deck with “his boys”, throughout the action.

Sinbad was promoted in 1943 to the rank of K9C, “Chief Dog” – equivalent to Chief Petty Officer – the second of only two dogs to be classified as non-commissioned officers.  Since that time, ‘regulations’ have transformed all subsequent animals into “property” rather than personnel.

Fun fact:  The first was Sergeant Stubby, the Staffordshire Terrier who was smuggled “over there” during the Great War, and once caught a German spy by the arse while he was prowling about allied trenches.

Campbell served the duration of WW2, with Sinbad on board, the entire time.  In 1948, he was ready to retire.  Sinbad had been at sea for eleven years.   He was finally ready for shore detail.

The assembled media and photographers were too much that day, and Sinbad bolted across the gang plank, and down the dock.  To be AWOL from a United States Coast Guard cutter is a serious offense, and Sinbad was busted in rank, back to Dog, 1st class.  He was probably just as happy to be back with the enlisted guys.

Sinbad was transferred to the Barnegat Light Small Boat Station in New Jersey, where he served as station mascot for the duration of his military career.

Chief Dog Sinbad served all of his fourteen years with the United States Coast Guard.  He passed away on this day in 1951 at the Barnegat light station and is buried there, at the base of the flagpole.  A sailor always, Sinbad could drink with the best of them, and always enjoyed that cuppa black coffee.  Irrespective of his latest rank, he was many years, a media celebrity.  Life magazine may have said it best:  “An Old Sea Dog Has Favorite Bars and Plenty of Girls in Every Port.”

Throughout her 46 years of service, USCGC Campbell was referred to as “The Queen of the Seas”.  She was sunk as a training target in November 1984, a single harpoon missile leaving her nearly intact, as she went out of sight.  The final radio message, broadcast as she disappeared beneath the waves:  The Queen is dead.  Long live the Queen.

Today, the USCGC Campbell (WMEC-909) patrols the east coast out of the Portsmouth Naval Shipyard in Kittery, Maine, the sixth Coast Guard Cutter to bear the name. 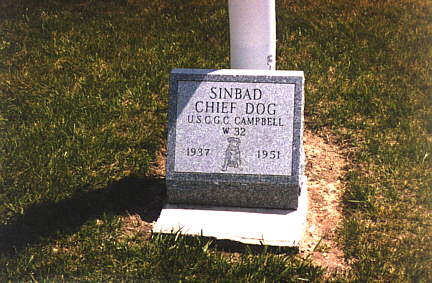