For the Americans and their allies, the frontal assault of October 9 was one of the bloodiest engagements, of the Revolution.  It could have been worse.  As battered American and French soldiers fell back, 500 free men of color known as the Chasseurs Volontaires de Saint-Domingue stepped up, to cover their retreat.

Many of these Haitian soldiers went on to win their own war of independence, and credited their military experience, to Savannah. 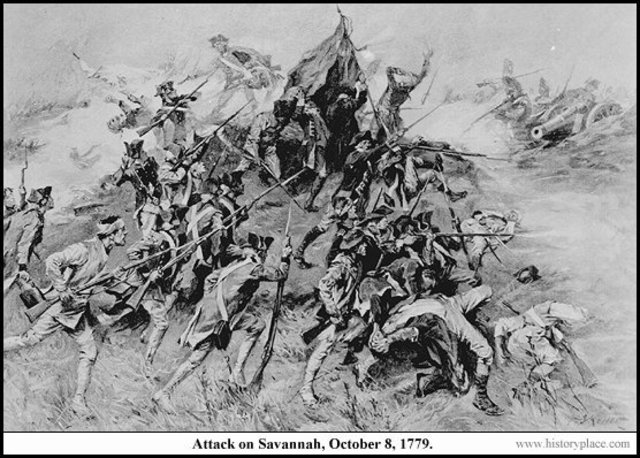 As 1778 drew to a close, British military planners could look back on five years of trying to suppress rebellion in the American colonies, with little to show for it.   In March of that year, the British defeat at Saratoga had brought France into the war, on the side of the Rebels.

Two years of open warfare had centered mostly on the north.   Now, a “southern strategy” was devised to conquer rebellious colonies in the south, while isolating those to the north. Key to the Southern Strategy was Georgia and the colonial capital at Savannah, the southernmost commercial port of the thirteen Colonies.

General sir Henry Clinton dispatched a force of some 3,100 from New York under Lieutenant Colonel Archibald Campbell, along with an unknown quantity of artillery. Campbell arrived outside Tybee Island on December 23.

Georgia was defended by two separate forces at this time, units of the Continental Army under the command of General Robert Howe, and state militia under the command of Governor John Houstoun.  The two men had a history of squabbling for control and most of their troops, had yet to be tried.

The 850 under General Howe never really had a chance, against the battle hardened Regulars, Hessian auxiliaries and Loyalist militia, coming ashore on December 29.  Defeat turned to rout when Howe’s forces threw down their weapons and ran.  Campbell reported that “It was scarcely possible to come up with them, their retreat was rapid beyond conception.

Howe was court-marshaled for the disaster, while Campbell bragged about being “the first British officer to [rend] a star and stripe from the flag of Congress“

Brigadier General Augustine Prevost arrived from St. Augustine Florida two weeks later, with a mixed force of Regulars and Creek and Cherokee allies.   Campbell and a force of 1,000 would take the provisional capital at Augusta that February but soon retreated to Savannah, citing insufficient support among Loyalist and Native American populations.

American hopes soon fell back on their new-found alliance with France. During the following summer, French Admiral Count Charles-Hector Theodat d’Estaing captured St. Vincent and Grenada in the British West Indies, clearing the way to the Georgia coast. The powerful 47-ship French fleet arrived with 4,000 troops on September 1, surprising and capturing several British ships outside the mouth of the Savannah River. 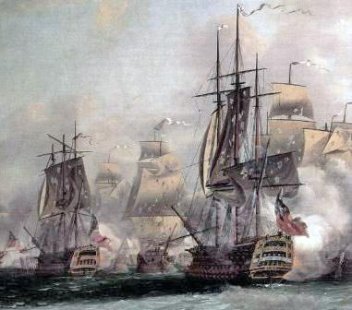 D’Estaing sent an ultimatum to British Commander Augustine Prevost on September 16, 1779. He was to surrender the city “To the arms of his Majesty the King of France”, or he would be personally answerable for what was about to happen. It could not have pleased General Benjamin Lincoln or his Patriot allies when d’Estaing added “I have not been able to refuse the army of the United States uniting itself with that of the King. The junction will probably be effected this day. If I have not an answer therefore immediately, you must confer with General Lincoln and me”.

“Bullet Head Prevost”, so called because of a circular scar on his temple, stalled for 24 hours, using the time in furiously building up his defenses and calling up 800 reinforcements from South Carolina.

Lincoln joined d’Estaing on September 23 with an army of 3,000 militia and Continental soldiers, laying siege to Savannah and the 2,500 British and Loyalist troops in occupation.

On October 1, a British relief column under one Captain French was coming to the city’s aid, camped on the banks of the Ogeechee River. Georgia Continental Colonel John White had two officers, a sergeant and three privates with him, when he tricked French into surrendering. These guys ran through the woods lighting so many fires that the British thought the entire continental Army was bivouacked around them. Captain French was unavailable for comment but, it must be a special feeling, knowing that you just surrendered 111 guys to six, without firing a shot.

Lack of horses and artillery carriages delayed the allies’ moving their cannon ashore, so French warships bombarded the city from the sea. At one point shortly after Midnight on October 3, with rum rations flowing far too freely, fire from French gunners became more dangerous to themselves than to the city itself.

For the Americans and their allies, the frontal assault of October 9 was one of the bloodiest engagements, of the Revolution.  It could have been worse.  As battered American and French soldiers fell back, 500 free men of color known as the Chasseurs Volontaires de Saint-Domingue stepped up, to cover their retreat.

Many of these Haitian soldiers went on to win their own war of independence, and credited their military experience, to Savannah.

The siege of Savannah inflicted untold misery among the population, but Patriot forces and their French allies, never did break the city’s defenses. The siege broke a short time later, amidst recriminations on both sides.   D’Estaing returned to France, where he lost his head to the guillotine in 1794.

Savannah would remain in British hands until the end of the war, finally evacuated on July 11, 1782. A coquina marker in a small Savannah park; that soft, seashell limestone common throughout the Caribbean basin to Florida and beyond, bears a small brass plaque, darkened with the patina of age.