The bones of Americans captured at Bataan and Corregidor and burned alive at Palawan, were discovered soon after liberation.  Most were huddled together where they had died, trying to escape the flames. 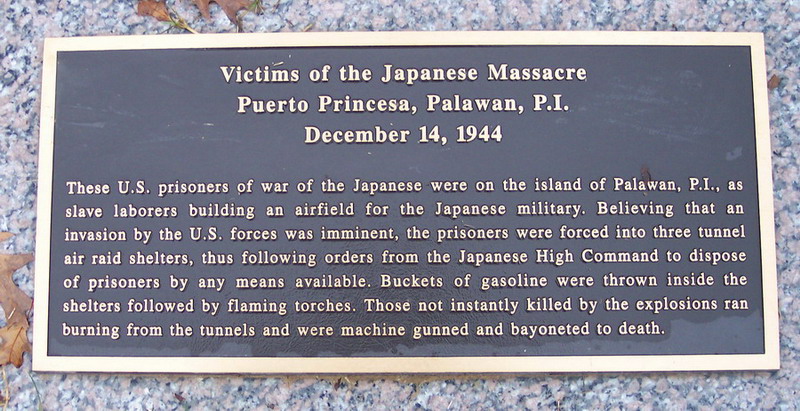 The United States was unprepared to fight a World War in 1942, and dedicated itself to beating Adolf Hitler. General Douglas MacArthur abandoned the “Alamo of the Pacific” on March 11 saying “I shall return”, leaving 90,000 American and Filipino troops without food, supplies or support with which to fight off the Japanese offensive.

On April 9, 75,000 surrendered the Bataan peninsula, only to be herded off on a 65-mile, five-day slog into captivity through the heat of the Philippine jungle. Japanese guards were sadistic. They would beat the marchers and bayonet those too weak to walk. Japanese tanks would swerve out of their way to run over anyone who had fallen and was too slow in getting up. Some were burned alive. Already crippled from tropical disease and starving from the long siege of Luzon, some 700 Americans and more than 10,000 Filipinos perished in what came to be known as the Bataan Death March.

That August, 346 men were sent 350-miles north to Palawan Island, on the western perimeter of the Sulu sea. The prisoners of “camp 10-A” were expected to build an airfield for their Japanese captors, hauling and crushing coral gravel by hand and pouring concrete, seven days a week.

The daily food ration was nothing more than a handful of wormy Cambodian rice and a thin soup made from boiling camote vines, a type of local sweet potato. Prisoners unable to work had even this thin ration, cut by 30 per cent.

The abuses these men received at the hands of the kempeitai, the Japanese army’s military police and intelligence unit, were unremitting, and savage. Prisoners were beaten with pick handles, kicked and slapped on a daily basis. Anyone who attempted to escape, was summarily executed.

Caught stealing food, six American POWs were tied to coconut trees and whipped with wire and then beaten with a wooden club, 3-inches in diameter. The six were then forced to stand at attention while a guard beat them unconscious, only to be revived to undergo further beatings. One Japanese private named Nishitani broke the left arms of two Americans with an iron bar, for taking green papayas off a tree.

Radioman 1st Class Joseph Barta described the Japanese guards at Palawan, as “the meanest bastards who ever walked the earth”.

Medical care was non-existent. One Marine, Pfc Glen McDole of Des Moines Iowa, was forced to endure an appendectomy with no anesthesia, and no infection fighting drugs.

The war was going badly for the Japanese, by late 1944.  US forces under General Douglas MacArthur landed at Leyte, that October. Morale soared for the 150 American prisoners remaining at Palawan, when a single Consolidated B-24 Liberator bomber sank two enemy ships and damaged several aircraft. More Liberators returned on October 28 and destroyed 60 enemy aircraft on the ground, as treatment of the prisoners grew even worse. 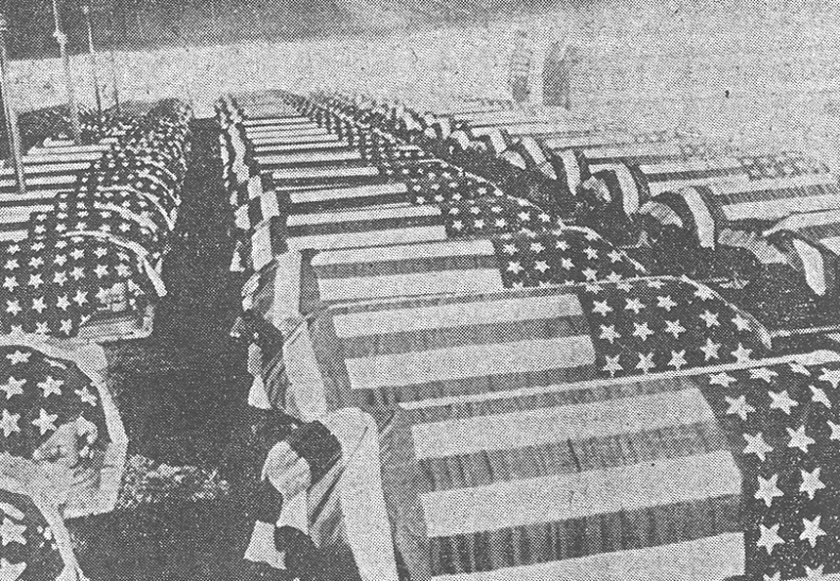 By early December, Allied aircraft were a near-constant presence overhead. Deliverance must have seemed imminent to the 150 American prisoners left on Palawan island, but it wasn’t meant to be. On December 14, some fifty to sixty soldiers under the leadership of 1st Lt. Yoshikazu Sato, prisoners called him the Buzzard, doused the remaining prisoners with gasoline and set them on fire. One hundred and thirty-nine were burned to death, or clubbed, or machine gunned as they tried to get away. The sound of screams were punctuated with shouts and laughter, from the guards.

Some closed to hand-to-hand combat with their tormentors and even managed to kill a few, but most never had a chance. Lieutenant Carl Mango of the U.S. Army Medical Corps ran toward the Japanese with his clothes on fire, pleading with them to use some sense. He too, was machine-gunned.

Thirty or forty managed to escape the kill zone, only to be hunted down, and murdered. From his hiding place on the beach, Eugene Nielsen of the 59th Coast Artillery observed several begging to be shot in the head, only to be bayoneted in the stomach and left to an agonizing death, by laughing guards. Erving August Evans of Nielsen’s unit stood up and said “All right, you Jap bastards, here I am and don’t miss me“.  He was shot, and his body set alight.

The killing went on until well after dark yet, somehow, some were able to escape detection and managed to swim the 5-mile bay to be picked up by friendly Filipino guerrillas, and taken to U.S. Rangers.   Rufus Smith was badly bitten on the left arm and shoulder by a shark, but manged to reach the other side.  USMC Pfc Donald Martyn reached the opposite side and turned in a direction opposite the others, and was never seen again.Glen McDole, the marine who survived the appendectomy, hid in a garbage dump, and witnessed one marine repeatedly poked with bayonets. Bleeding profusely, the man begged to be shot, only to have first one foot doused with gasoline and set on fire and then the other and finally, a hand. At last, his five or six tormentors tired of this game and he too, was set alight.

One Japanese soldier recorded the atrocity in a diary, later found in the camp:

“December 15–Due to the sudden change of situation, 150 prisoners of war were executed. Although they were prisoners of war, they truly died a pitiful death. The prisoners who worked in the repair shop really worked hard. From today on I will not hear the familiar greeting, ‘Good morning, sergeant major.’ January 9–After a long absence, I visited the motor vehicle repair shop. Today, the shop is a lonely place. The prisoners of war who were assisting in repair work are now just white bones on the beach washed by the waves. Furthermore, there are numerous corpses in the nearby garage and the smell is unbearable. It gives me the creeps”.

Eugene Nielsen’s testimony sparked a series of POW rescues by American forces in 1945, including the raid on Cabanatuan of January 30, the surprise attack at Santo Tomas on February 3, 1945, the raid of Bilibid Prison on February 4 and the assault at Los Baños on February 23.  Starving prisoners were so emaciated, that Rangers were able to carry them out, two at a time.

The bones of Americans captured at Bataan and Corregidor and burned alive at Palawan, were discovered soon after.  Most were huddled together where they had died, trying to escape the flames.

Sixteen Japanese soldiers were tried and convicted of the massacre in August 1948 and several sentenced to death.  All were later released, in a general amnesty.

Of 146 enlisted men and four officers held in the Palawan prison camp, eleven survived the massacre of December 14, 1944.   Glen McDole was one of them.  Author Bob Wilbanks wrote a book if you’re interested, a biography really, entitled:  Last Man Out: Glenn McDole, USMC, Survivor of the Palawan Massacre in World War II.

In 1952, 123 of the 139 victims of the Palawan massacre were buried in a common grave.  They came from forty-two states and the Philippines, reverently interred in a mass burial site in Section 85 at the Jefferson Barracks National Cemetery, near St. Louis, Missouri. Today, their graves are visited by those who remember.  And by the deer, grazing among the stones most evenings, as the sun drops out of sight. It is the largest such group burial, at Jefferson Barracks. 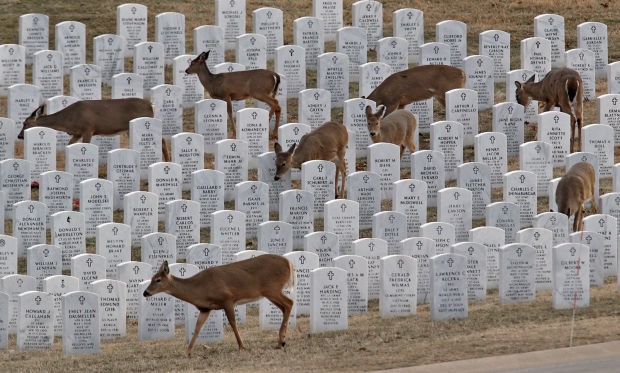 How many such massacres were carried out with no one left alive to tell the tale, remains anyone’s guess.