There have been no fewer than 207 End-of-the-World predictions over the last 2,000 years. 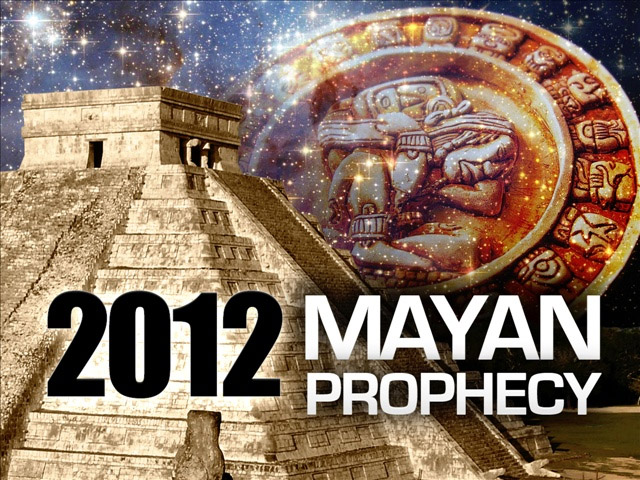 During the recent past, one of the sillier bits of pop culture nonsense served up to us, may be that time the world came to an end on December 21, 2012.

It was the Mayan Apocalypse. A day of giant solar flares, when the planets aligned to cause massive tidal catastrophe, and the Earth collided with the imaginary planet Nibiru.  Over in China, Lu Zhenghai even built himself an Ark. Sort of.

If I’d only been smart enough back then, to sell survival kits.

End-of-the-world scenarios are nothing new. In 1806, the “Prophet Hen of Leeds” was laying eggs, inscribed with the message “Christ is coming”. It was the end of times.  The Judgement Day cometh.

The story, as told in the book “Extraordinary Popular Delusions and the Madness of Crowds,” written by Scottish author Charles Mackay in 1841, tells the story of a “panic[ked] terror”, when a “great number of visitors” traveled from far and near, to peer at the chicken Nostradamus. 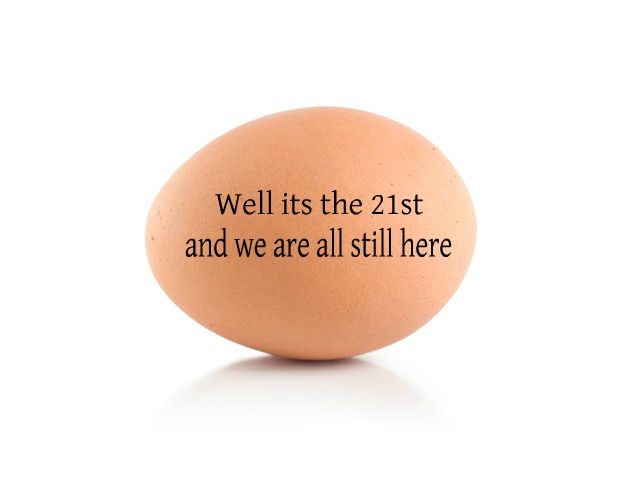 Turns out that Mary Bateman, the bird’s owner and a serial fraudster, was writing these messages with some kind of “corrosive ink”, maybe an acid, and reinserting them into the poor chicken. The “Yorkshire Witch” met her end on a gibbet, hanged for the poisoned pudding she gave that couple to relieve their chest pain.  But I digress.

If you were around in 1986, you may remember the great excitement, concerning  the return of Halley’s Comet. The celestial body only comes around once every 76 years and, the time before that, it was the end of the world. In 1910, the New York Times reported the discovery of the deadly poison cyanogen, in the comet’s tail. French astronomer Camille Flammarion predicted the gas would “would impregnate the atmosphere and possibly snuff out all life on the planet.”

Hucksters sold comet pills. Doomsayers claimed that massive tides would cause the Pacific to empty, into the Atlantic. Finally, the end of days arrived. May 20, 1910.  And then it went.  There was no end of the world though, tragically, 16-year-old Amy Hopkins fell to her death from a rooftop, while awaiting the comet.

There have been no fewer than 207 End-of-the-World predictions over the last 2,000 years, if Wikipedia is any source. Polls conducted in 2012 across twenty countries revealed percentages from 6% in France to 22% in the United States and Turkey, believing the world would come to an end, in their lifetimes. 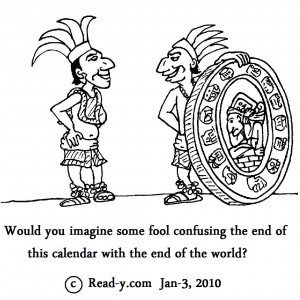 5,000 years ago, the Mayan civilization of modern-day Mexico and Central America developed a sophisticated calendar, working with a base numerical system of 20.

It was three calendars, really. The “Long Count” was mainly used for historical purposes, able to specify any date within a 2,880,000 day cycle. The Haab was a civil calendar, consisting of 18 months of 20 days, and an “Uayeb” of five days. The Tzolkin was the “divine” calendar, used mainly for ceremonial and religious purposes. Consisting of 20 periods of 13 days, the Tzolkin goes through a complete cycle every 260 days. The significance of this cycle is unknown, though it may be connected with the 263-day orbit of Venus. There is no year in the Haab or Tzolkin calendars, though the two can be combined to specify a particular day within a 52-year cycle.

The last Long Count began in August 3114 BC.  Counting forward, scholars decided on December 21, 2012, as the end of the cycle.

An estimated 2% of the American public believed this betokened the end of the world. Online searches went up for one-way flights to Turkey and the South of France, both of which were rumored to be safe havens from the apocalypse.

They should have asked a Mayan, who may have been amused by all those crazy Gringos.  The world wasn’t coming to an end.  The calendar just rolls over and begins again at “Zero”, like the old odometers that only went up to 100,000 miles.  What a party that could have been, though.  The “New Year” to end all New Years.  Only comes around once every 5,125 years, plus 133 days.  Happy Long Count.