Lucius Sergius Catilina was a Roman Senator, best remembered for his attempt to overthrow the Republic. In particular the power of the aristocratic Senate. He seems to have been an unsavory character, having murdered first his brother in law and later his own wife, before being tried for adultery with a vestal virgin.

Following the overthrow of the  Monarchy in 509BC, the Rome of antiquity governed itself, as a Republic. The government was headed by two consuls, annually elected by the citizens and advised by a Senate. The Republic operated on a separation of powers principle, with checks and balances and a strong aversion to the concentration of power. Except in times of national emergency, no single individual was allowed to wield absolute power over his fellow citizens. 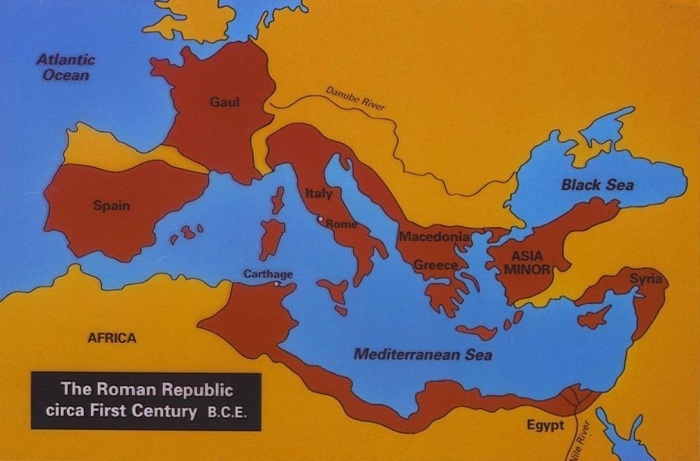 A series of civil wars and other events took place during the first century BC, ending the republican period and leaving in its wake an Imperium, best remembered for its conga line of dictators.

Lucius Sergius Catilina was a Roman Senator during this period, best remembered for his attempt to overthrow the Republic. In particular the power of the aristocratic Senate. He seems to have been an unsavory character, having murdered first his brother in law and later his own wife, before being tried for adultery with a vestal virgin.

Catilina’s second wife, the formidable Aurelia Orestilla, reputedly murdered the Senator’s grown son, for objecting to the match.  The American political commentator and Rutgers professor Leonard A. Cole once said “You are not responsible for what your friends do, but you will be judged by the company you keep“. Seems about right, to me.

The first of two conspiracies bearing his name began in 65BC. Catilina was supposed to have conspired to murder a number of Senators on their entering office, and making himself, Consul. He may or may not have been involved at this stage, but he certainly would be for the second.

In 63BC, Catilina and a group of heavily indebted aristocrats concocted a plan with a number of disaffected veterans, to overthrow the Republic. On the night of October 18, Crassus brought letters to Consul Marcus Tullius Cicero warning of the plot. Cicero read the letters in the Senate the following day, later giving a series of four speeches: the Catiline Orations, considered by many to be his best political oratory.

In his last speech, delivered in the Temple of Concordia on December 5, 63BC, Cicero established a basis for other speakers to take up the cause. As Consul, Cicero was not allowed to voice an opinion on the execution of conspirators, but this speech laid the groundwork for others to do so, primarily Cato the Younger. 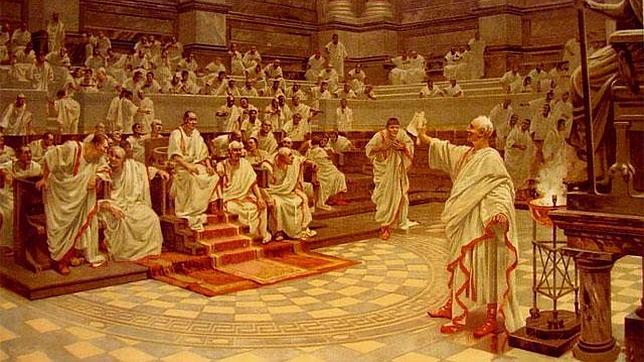 The actual Senate debates are lost to history, leaving only Cicero’s four orations, but there was considerable resistance in the Senate to executing the conspirators. They were, after all, fellow aristocrats.

Armed forces of the conspirators were ambushed at the Milvian Bridge, where the Via Flaminia crosses the Tiber River. The rest were executed by the end of December. Cicero’s actions had saved the Republic. For now. 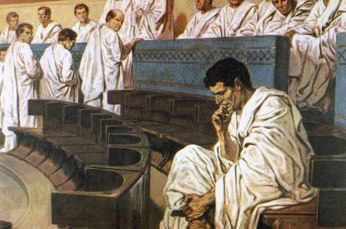 At one point during this period, then-Senator Julius Caesar stepped to the rostrum to have his say. He was handed a paper and, reading it, stuck the note in his toga and resumed his speech. Cato, Caesar’s implacable foe, stood in the senate and demanded that Caesar read the note. It’s nothing, replied the future emperor, but Cato thought he had caught the hated Caesar red handed. “I demand you read that note”, he said, or words to that effect. He wouldn’t let it go.

Finally, Caesar relented. With an actor’s timing, he pulled out the note and read it to a hushed senate.  It turned out to be a love letter, a graphic one, wherein Servilia Caepionis described in detail what she wanted to do with Caesar when she got him alone. As if the scene wasn’t bad enough, Servilia just happened to be Cato’s half-sister.

Here’s where the story becomes very interesting. Caesar was a well-known lady’s man. By the time of his assassination, the Emperor had carried on with Servilia Caepionis, for years. Servilia had a son, called Marcus Brutus. He was 41 on the 15th of March, 44BC. The “Ides of March”. Caesar was 56. The Emperor’s dying words are supposed to have been “Et tu, Brute?”, as Brutus plunged the dagger in. “And you, Brutus?” But that’s not what he said. Those words were put in his mouth 1,643 years later, by William Shakespeare.

Eyewitness accounts to Caesar’s last words are lost to history, but more contemporary sources recorded his dying words to be “Kai su, Teknon?” In Greek, it means “And you, my child?”

It seems unlikely that Brutus murdered his own father on the Ides of March.  The dates don’t seem to work out. Still, it makes you wonder…

2 thoughts on “December 5, 63BC The Catiline Conspiracy”