Hannibal met the Roman General Publius Cornelius Scipio on October 19, 202 B.C. near the town of Zama, in modern-day Tunisia.  Scipio had barely escaped Cannae with his life, but he had learned his lessons, well.  On this day at Zama, Hannibal was defeated by his own tactics. 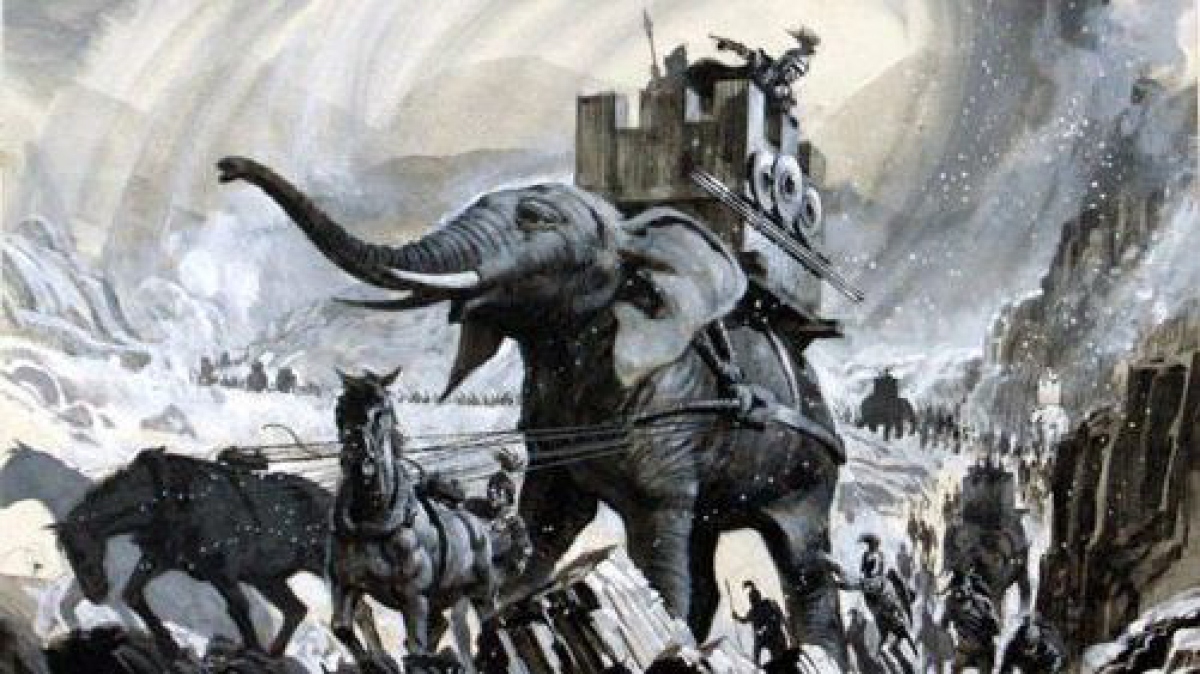 In 814 B.C., Phoenician settlers left their homeland on the coast of modern Lebanon, establishing colonial port cities along the Mediterranean coast. They built safe harbors for their merchant fleets in what is now Morocco, Algeria, Spain and Libya, among others. The largest such port city they built on the North African Gulf coast of Tunis, calling the place “Carthage”, meaning “New City”.

According to legend, the orphaned twin sons of Rhea Silvia and Mars, the god of war, were suckled by a she-wolf on the Italian Peninsula, 61 years later. Their names were Romulus and Remus. They would found a city on the site of their salvation, a city which would come to be called Rome.

Carthage and Rome coexisted for hundreds of years, forming a relationship mostly based on trade. Carthaginian traders were famed in Classical Greece and Rome as ‘traders in purple’, referring to the near-monopoly in the precious Royal Purple dye derived from the Murex snail.

They’re known for the first “abjad”, (consonant based writing system) to gain widespread usage, the first fully developed Phoenician script dating back to the mid-11th century, BC.  The Phoenician alphabet, conventionally known as the Proto-Canaanite alphabet, is antecedent to nearly all modern phonetic alphabets in use today.

As Rome and Carthage became centers of political power and influence, it was inevitable that the two would clash. Carthage held undisputed mastery of the seas in the third century BC, while the rapid expansion of the Roman Republic brought them into conflict in Sicily, at that time partly under Carthaginian control.

The first of three Punic Wars, from Punicus (latin: of or relating to Carthage), began in 264BC. At the time, the Roman Legions were the most powerful land army in the region, while having little to oppose Carthage, at sea.

The Roman introduction of the Corvus, a gangway with heavy spike mounted to the underside, allowed the Romans to convert sea battles onto their own “turf”, as Roman soldiers boarded enemy ships and defeated crews in hand to hand combat. The first Punic war was over by 241 B.C., with Carthage paying heavy indemnities and ceding much of its western Mediterranean territory.

Carthage rebuilt its finances in the following years, expanding its colonial empire in Spain under the warlike Barcid family. There were several trade agreements between Rome and Carthage, even a mutual alliance against King Pyrrhus of Epirus, while Hamilcar Barca, Strategus (Military governor) of Iberia, expanded influence on the southeastern Iberian Peninsula, near what is now Cartagena (“New Carthage”), Spain.

Eight years earlier, Hamilcar Barca made his then 12-year-old son Hannibal swear undying hatred of the Romans. In 219 B.C., Rome and Carthage found themselves in conflict over the Roman protectorate of Saguntum, in modern Spain. The Roman senate demanded that Carthage hand over Hannibal.  The Carthaginian oligarchy refused. In 218 B.C., Rome declared war.

No longer a maritime power, Hannibal set out in the spring of 218 B.C., crossing into hostile Gaul (France) and arriving at the Rhône River in September with 38,000 infantry, 8,000 cavalry, and 37 war elephants. Hannibal’s crossing of the Alps that winter is one of the great feats of military history, and cost him nearly half of his force before entering Italy, that December.

The first of several major battles took place on December 18, 218 B.C. on the banks of the Trebia River. The Roman General, consul Tiberius Sempronius Longus allowed himself to be drawn into a trap and crushed. Two legions were victorious on their part of the battlefield and retreated with honor to the Province of Piacenza but, overall, Trebia was a resounding defeat for the Roman military.

The army of Hannibal was near invincible, defeating Roman legions in one major engagement after another.  Trebia, Lake Trasimene:  for sixteen years it was virtually unbeatable, devastating the Italian countryside as Rome drafted one army after another, only to be crushed, yet again.  The annihilation of Roman forces at Cannae of August 2, 216, is studied by military tacticians, to this day.

Meanwhile, Carthage itself was politically divided. Hannibal never did receive significant support from home, save for his own brother Hasdrubal, whom he summoned to join him Italy, in 209 B.C.  Hasdrubal repeated Hannibal’s feat of ten years earlier, crossing the Alps with war elephants and all, but the brothers’ reunification was never meant to be.  Hasdrubal Barca was defeated and slain in 207 B.C. near the River Metaurus, his dismembered head thrown in a sack and tossed into the camp of his brother.

It was the decisive turning point, in the second Punic War.

In the end, the General who had laid waste to the Italian peninsula was summoned to defend his homeland in North Africa.  Hannibal met the Roman General Publius Cornelius Scipio on October 19, 202 B.C. near the town of Zama, in modern-day Tunisia.  Scipio had barely escaped Cannae with his life, but he had learned his lessons, well.  On this day at Zama, Hannibal was defeated by his own tactics.  The Roman victory was decisive, ending the second Punic war under humiliating terms for Carthage.  Scipio returned to Rome triumphant, henceforward and forever to be known by the honorific, “Africanus”.

The third Punic War saw the Romans besiege Carthage itself. The city didn’t have a chance. Thousands of Carthaginians were slaughtered as the city fell in 146 B.C. The rest, as many as 70,000, were sold into slavery.  Legend has it that the ground was sewn with salt, that nothing would grow there, ever again.

Hannibal went into Carthaginian politics in the wake of the second Roman war, instituting elections for military judges and changing terms of office from life, to two years. Carthage was a thoroughly defeated power at this time, but Hannibal remained the bogey man, whom the Roman psyche could not let go.  Roman mothers told misbehaving children that Hannibal would come and get them, if they didn’t behave.  Statesman Marcus Porcius Cato, “Cato the Elder”, would end his every speech with the words “Ceterum autem censeo Carthaginem esse delendam” (“Furthermore, I consider that Carthage must be destroyed”). The sentiment is often abbreviated to “Carthago delenda est” . “Carthage must be destroyed”.

Hannibal retired from politics in 195 B.C., in response to Roman concerns of his growing influence.  He journeyed first to Tyre, the mother city of Carthage, before traveling on to Antioch and later Ephesus, in modern day Turkey.  There he became military adviser and continued to clash with Roman allies, but would never threaten the Republic, as once he had done.

The Romans demanded that their old nemesis be turned over somewhere around 183 B.C., as Hannibal fled from one city to another, to escape his pursuers. Unwilling to be paraded through Rome in a cage, he poisoned himself and died sometime around 181 B.C. In a letter found after his death, Hannibal had written “Let us relieve the great anxiety of the Romans, who have found it too heavy a task to wait for the death of a hated old man”.