Cross met Crescent this day in 1571 near the Greek island of Lepanto.  It’s been called “The battle that saved the Christian west”. 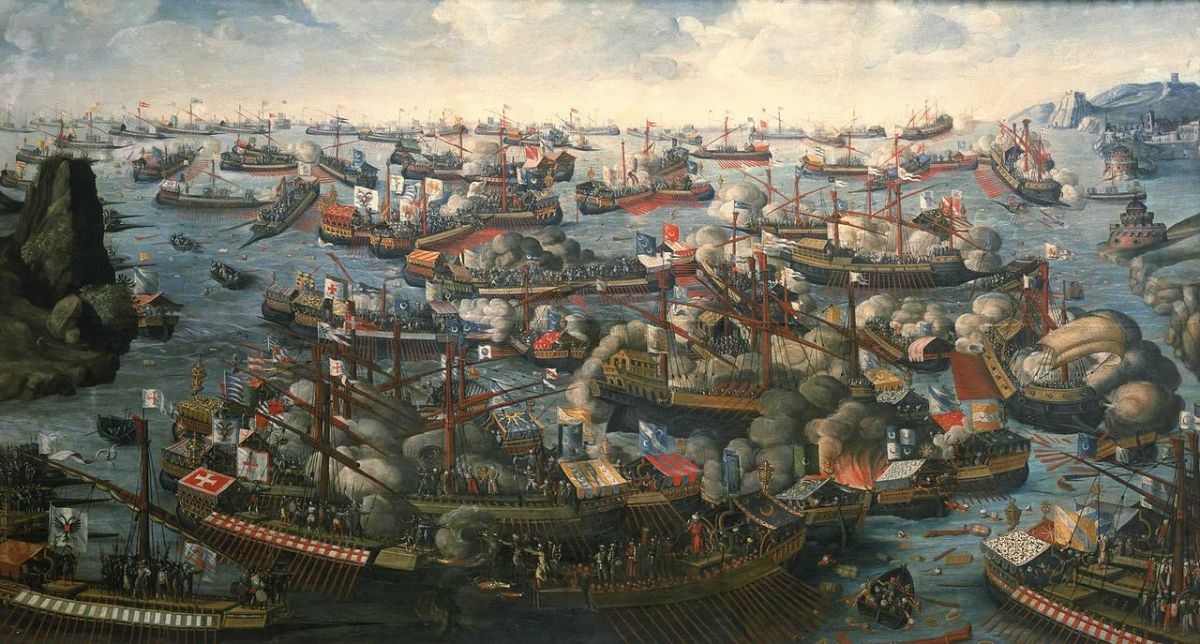 Following the Turkish conquest of Constantinople in 1453, the Ottoman Empire was massively expanded under Sultan Selim I, “Selim the Grim”. 1516 – ’17 saw a 70% expansion of Ottoman landmass, with the subjugation of large swaths of the Arabian peninsula, historic Syria, the eastern Mediterranean and Egypt.

Selim’s son and successor would become the tenth and longest-ruling Ottoman Sultan in 1520, until his death in 1566. He was “Süleiman the Magnificent”, a man who, at his height, ruled over some fifteen to twenty million, at a time when the entire world contained fewer than 500 million

By 1522, Süleiman had managed to expand his rule to Serbia, placing the Ottoman Empire in direct conflict with the Habsburg monarchy, early predecessor to what we remember from WW1, as the Austro-Hungarian empire.

The Catholic states of Europe were plunged into a morass of their own at this time, wracked by the beginnings of the Protestant Reformation, and by a series of wars for hegemony, over the formerly-independent city-states of the Italian peninsula. The “Italian wars” of the late fifteenth and early sixteenth centuries pitted no fewer than eight separate Christian alliances against one another, between forces of the Valois and Habsburg monarchies, the Holy Roman Empire and various Italian republics. In time, republican Venice was alone in retaining her independence, aside from minor city-states such as Lucca and San Marino.

Venice attempted to check Ottoman expansion into the eastern Mediterranean until 1540 when, exhausted and despairing of support, signed a humiliating capitulation to the Sultan.

This, the second such conflict between Venice and the Ottomans, left the republic without her former buffer territories in Greece and the Serbo-Croatian possessions of Dalmatia.

Hurrem Sultan, better known as “Roxelana”, was probably kidnapped from the Polish principality of Ruthenia, and sold into the slave markets of Istanbul, given by the Valide Sultan (legal mother of the Sultan and chief consort to Selim I), to her son Süleiman.  Roxelana is unique in Ottoman history, rising from Harem slave and Sultan’s concubine, to Süleiman’s legal wife and “Queen of the Ottoman Empire.” It was she who began a 130-year period of female influence over the male line known as the “Sultanate of Women” when, though born to slavery, the wives and mothers of the Sultan wielded extraordinary political power over affairs of Empire.

She was instrumental in driving the unlikely ascension of her son Selim II to the Sultanate, following the death of her son Mehmed from smallpox, and the murders of his half-brother Mustafa and his brother Bayezid, engineered between himself and his father.

The eastern Mediterranean island of Cyprus was a major overseas possession of the Venetian republic and, surrounded by Ottoman territory, had long been “in the wolf’s mouth”. The Turkish invasion force of 350-400 ships arrived on July 1, 1570, carrying between 80,000 – 150,000 men. First capturing the coastal cities of Paphos, Limassol and Larnaca, the Ottoman force marched inland to lay siege to Nicosia, the largest city on the island. The siege would last forty days, resulting in the death of some 20,000 residents and the looting of every church, public building and palace, in the city.

By Mid-September, the Ottoman cavalry arrived outside the last Venetian stronghold on Cyprus, the east coast port city of Famagusta.

At this point, Famagusta’s defenders numbered fewer than 9,000 men with 90 guns, pitted against an invading force swelled by this time to over 250,000 with 1,500 cannon. The defense of Famagusta would hold out for eleven months, led by the Venetian lawyer and military commander, Marcantonio Bragadin. By the following August, five major assaults had cost the lives of some 52,000 invaders, including the first-born son of the Turkish commander, Lala Kara Mustafa Pasha. Bragadin’s command was reduced to 900 sick, starving and injured defenders who, like local civilians, begged him to surrender.

According to the customs of the time, negotiation before a city’s defenses were successfully breached allowed for terms of surrender, whereas all lives and property were forfeit, in a city taken by storm. Terms of safe passage were agreed upon, yet, on presentation of the city, Bragadin was seized by Lala Mustafa Pasha, his ears and nose cut off, and thrown into a cell. A massacre followed in which every Christian left alive in the city, was killed.  Bragadin was skinned alive in the public square and the stuffed with straw, reinvested with his military insignia, and sent with the heads of his officers to Istanbul, as a gift to Sultan Selim II.

Pope Pius had tried since 1566, to put together a “Holy League” to oppose the Ottoman invasion.   Marcantonio Bragadin was betrayed in the end and put to death.  Yet, the heroic defense against impossible odds of September 17, 1570 to August 5, 1571, bought a coalition of Catholic maritime states, time in which to defend themselves.

The Ottoman empire had not lost a major naval battle, since the 14th century.

What the Holy League lacked in numbers however, was made up in equipment, and experience.  The Christians possessed 1,815 guns, to fewer than half than number for the Ottoman fleet.

Ten thousand would be lost to the Christian side, compared with four times that number, for the adversary.  the Ottoman fleet was crushed over five hours of combat, losing 200 ships burned, sunk or captured, compared with 17 for the Europeans.

The Spanish novel Don Quixote has been translated into more languages than any book in western history, save for the holy bible.  Author Miguel de Cervantes participated in the battle at the age of 23, receiving three gunshot wounds and losing his left hand.

While the European victory at Lepanto put a halt to Muslim expansion in the western Mediterranean, zero lost territory was regained while the Sultan solidified his control, over the east. The Ottoman fleet was rebuilt within six months, including some of the largest capital ships, then in existence.

“You come to see how we bear our misfortune. But I would have you know the difference between your loss and ours. In wresting Cyprus from you, we deprived you of an arm; in defeating our fleet, you have only shaved our beard. An arm when cut off cannot grow again; but a shorn beard will grow all the better for the razor”.