To his detractors, Lick was a disagreeable miser. Eccentric, selfish, reclusive.  Even “touched in the head,” but absolutely honest and an astute businessman.  At the end of his life, he confounded them all, using his considerable fortune to benefit his adopted state of California.

If you’ve never explored your own genealogy, I highly recommend it. One of the more enjoyable aspects of shaking the family tree, is getting to know the people who fall out of it. I have the family genealogist, the man for I am namesake, to thank for this one.  Lieutenant Colonel United States Army (retired), Richard B. “Rick” Long, Sr., 2/25/37 – 3/31/18.  Rest in Peace, Dad.  You left us too soon.

James Lick was born in Stumpstown, Pennsylvania, now Fredericksburg, in the late days of the Washington administration. Lick’s grandfather William served in the Revolution and his son John went on to serve in the Civil War.  James himself was a carpenter’s son, who learned the trade of fine cabinet making, from his earliest days.

As a young man, Lick fell in love with Barbara Snavely, the daughter of a local miller.  When she became pregnant with his child he asked for her hand in marriage, only to be rudely rebuffed by her father.  When Lick owned a plant as large and opulent as his own, then and only then could James have his daughter’s hand in marriage.

Humiliated, Lick moved to Baltimore at age 21, where he learned to make pianos. He became quite skilled at the craft and moved to New York to set up his own piano shop.

On learning that his pianos were being exported to South America, Lick moved to Argentina to pursue the business.  Despite his poor Spanish his piano business thrived, though unstable Argentinian politics sometimes made things difficult.

In 1825, Lick left Buenos Aires, for a year-long tour of Europe. This was the time of the Brazilian War for Independence, and Portuguese authorities captured his ship on its return.

Passengers and crew were incarcerated in a POW camp in Montevideo, though Lick himself would later escape and returned on foot, to Buenos Aires.

Having made his first fortune, Lick briefly returned to Stumpstown, to claim his bride and now-fourteen year old son, only to learn that she had married another.   James Lick returned to Buenos Aires, later moving his business to Valparaíso, Chile and finally to Lima, Peru.  He would never marry.

Anticipating the Mexican American War and the annexation of California, Lick moved to San Francisco in 1846 with his tools, $30,000 in gold, and 600lbs of chocolate.

Lick had a backlog of piano orders at the time which he was forced to build himself, when his workers returned home to join the Mexican army. The chocolate sold so quickly, that Lick convinced his friend and confectioner, an Italian émigré to Peru, to come set up shop in California. The man’s name is recognizable to chocolate lovers, the world over. He was Domingo Ghirardelli 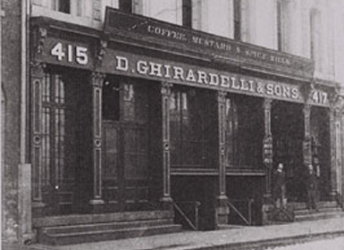 Gold was discovered at Sutter’s Mill, shortly after Lick’s arrival. He caught a little of the gold fever himself, but soon learned that he could make more money buying and selling land, rather than digging holes in it.

San Francisco was a small village in 1848. By 1850 the population had reached 20,000. Lick bought up land around San Jose and planted orchards of apricots, plums and pears.  It was here in Santa Clara county that Lick took his revenge on the long-dead Pennsylvania miller, spending the unheard-of sum of $200,000 and building the largest flour mill, then in the state.

In 1855, the now-37 year old John Lick came to live with the father he never knew.  The elder man had requested he do so, but the son didn’t get along with his cantankerous father, and soon returned “back east”.

Lick began construction of a Grand Hotel in 1861, with a 400 seat dining room straight out of the Palace at Versailles.  Many considered the “Lick House” to be the finest hotel west of the Mississippi River.

“The opulent dining room of The Lick House hotel on Montgomery at Sutter seated 400 and boasted walls and floors of exotic woods and three crystal chandeliers imported from Venice”, H/T sfcityguides.com

James Lick suffered a massive stroke in 1874. At the time, this carpenter’s son was the wealthiest man in California, his estates including much of San Francisco and Santa Clara County, all of Catalina Island and large holdings outside of Lake Tahoe.

To his detractors, Lick was a disagreeable miser. Eccentric, selfish, reclusive.  Even “touched in the head,” but absolutely honest and an astute businessman.  At the end of his life, he confounded them all, using his considerable fortune to benefit his adopted state of California.

For years, Lick had harbored an interest in astronomy.  President of the California Academy of Sciences George Davidson persuaded him to leave the majority of his fortune, to building the most powerful telescope then in existence.

Lick placed $2,930,654 into the hands of seven trustees, equivalent to $64 million today, with specific instructions for how the funds were to be used:

“$700,000 to the University of California for the construction of an observatory and the placing therein of a telescope to be more powerful than any other in existence. $150,000 for the building and maintenance of free public James Lick Baths in San Francisco. $540,000 to found and endow an institution of San Francisco to be known as the California School of Mechanic Arts. $535,000 for the son he never knew.  $100,000 for the erection of three appropriate groups of bronze statuary to represent three periods in Californian history and to be placed before the city hall of San Francisco. $60,000 to erect in Golden Gate Park, San Francisco, a memorial to Francis Scott Key, author of The Star-Spangled Banner”.

In 1875, Thomas Fraser recommended a site for the telescope on the 4,209′ summit of Mount Hamilton, near San Jose. Lick approved the location, provided that Santa Clara County build a “first class” road to the site. The county agreed and the road was completed in the fall of 1876.

On this day in 1876, James Lick died in his room at the Lick House.  His life’s great project was completed eleven years later. With a 36” lens, the “Great Lick Refractor” was, for its time, the largest refracting telescope in the world.

Today, the University of California’s “Lick Observatory” operates a 120-inch (3.0-meter) reflecting telescope, polished and ground on-site from a 10,000-pound Corning Labs glass test blank.  At the time of its commissioning in 1959, it was the second-largest telescope anywhere and remains to this day, the 3rd largest refracting telescope in the world.

According to his last wishes, the body of James Lick lies entombed, beneath the floor of the observing room.