Unable to wear their lifebelts correctly due to the large backpacks they wore, many men placed them around their waists. That only turned them upside down and that’s how they died, thrashing in the water with their legs above the waves. 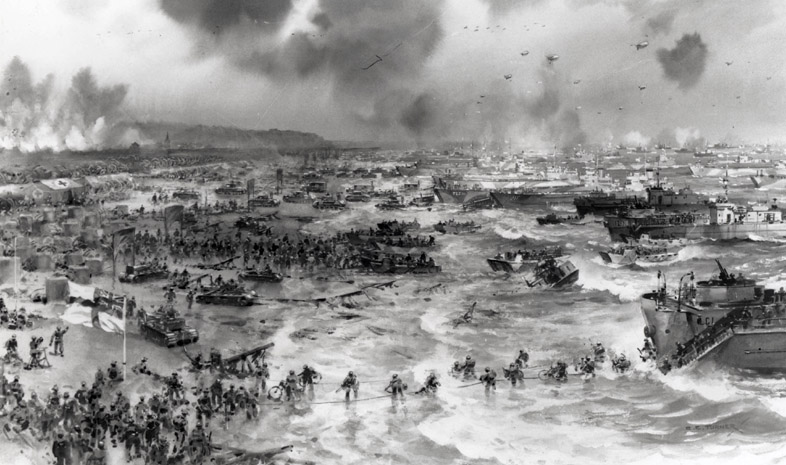 The first phase of Operation Overlord, code named ‘Neptune’, achieved its stunning success as the result of lessons learned from the largest amphibious training exercise of WW2, the six phases of “Operation Fabius”, itself following the unmitigated disaster of a training exercise that killed more Americans, than the actual landing at Utah beach.

Slapton is a village and civil parish in the River Meadows of Devon County, where the southwest coast of England meets the English Channel.  Archaeological evidence suggests human habitation from at least the bronze age.  The “Domesday Book”, the recorded manuscript of the “Great Survey” of England and Wales completed in 1086 by order of William the Conqueror, names the place as “Sladone”, with a population of 200.

In late 1943, the place was home to 750 families, some of whom had never so much as left their village.  Some 3,000 locals were evacuated with their livestock to make way for “Operation Tiger”, a full-scale rehearsal for the landing scheduled for the following spring.

Thousands of US military personnel were moved into the region during the winter of 1943-’44. The area was mined and bounded with barbed wire, and patrolled by sentries.  Secrecy was so tight, that even those in surrounding villages, had no idea of what was happening.

Exercise Tiger was scheduled to begin on April 22, covering all aspects of the “Force U” landing on Utah beach and culminating in a live-fire beach landing at Slapton Sands at first light on April 27.

Nine large tank landing ships (LSTs) shoved off with 30,000 troops on the evening of the 26th, simulating the overnight channel crossing. Live ammunition was used in the exercise, to harden troops off to the sights, sounds and smells of actual battle. Naval bombardment was to commence 50 minutes before H-Hour, however delays resulted in landing forces coming under direct naval bombardment. An unknown number were killed in this “friendly fire” incident. Fleet rumors put the number as high as 450.

Two Royal Navy Corvettes, HMS Azalea and Scimitar, were to guard the exercise from German “Schnellboots” (what the Allies called “E-Boats”), the fast-attack craft based out of Cherbourg.

HMS Scimitar withdrew for repairs following a collision with an LST on the 27th. In the early morning darkness of the following day, the single corvette was leading 8 LSTs carrying vehicles and combat engineers of the 1st Engineer Special Brigade through Lyme Bay, when the convoy was spotted by a nine vessel S-Boat patrol.

8 LSTs (Landing Ship, Tank) in single-file didn’t have a chance against fast-attack craft capable of 55mph.  LST-531 was torpedoed and sunk in minutes, killing 424 Army and Navy personnel. LST-507 suffered the same fate, with the loss of 202. LST-289 was severely damaged and grounded in flames, with the loss of 123. LST-511 was damaged in yet another friendly fire incident. Unable to wear their lifebelts correctly due to the large backpacks they wore, many men placed them around their waists. That only turned them upside down and that’s how they drowned, thrashing in the water with their legs above the waves. Dale Rodman, who survived the sinking of LST-507, said “The worst memory I have is setting off in the lifeboat away from the sinking ship and watching bodies float by.”

Survivors were sworn to secrecy due to official embarrassment, and the possibility of revealing the real invasion, scheduled for June.  Ten officers with high level clearance were killed in the incident, but no one knew that for sure until their bodies were recovered.  The D-Day invasion was nearly called off, because any of them could have been captured alive, revealing secrets during German interrogation and torture.

There remains a surprising amount of confusion, concerning the final death toll. Estimates range from 639 to 946, nearly five times the number killed in the actual Utah Beach landing.  Some or all of the personnel from that damaged LST may have been aboard the other 8 on the 28th, and log books went down along with everything else.  Many of the remains were never found. 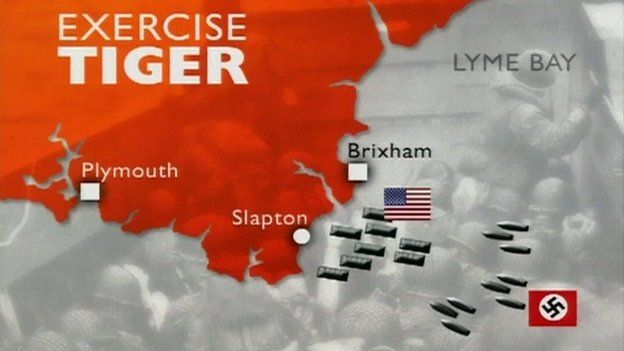 The number of dead would surely have been higher, had not Captain John Doyle disobeyed orders and turned his LST-515 around, plucking 134 men from the frigid water.

Today, the Exercise Tiger disaster is mostly forgotten.  Some have charged official cover-up, though information from SHAEF press releases appeared in the August edition of Stars & Stripes.  At least three books describe the event.  It seems more likely that the immediate need for secrecy and subsequent D-Day invasion swallowed the Tiger disaster, whole.  History has a way of doing that.

Some of Slapton’s residents came home to rebuild their lives after the war, but many never returned.  In the early ’70s, Devon resident and civilian Ken Small discovered an artifact of the Tiger exercise, while beachcombing on Slapton Sands.  With little to no help from either the American or British governments, Small purchased rights from the American Government to a submerged Sherman tank from the 70th Tank Battalion. The tank was raised in 1984 with help from local residents and dive shops, and now stands as a memorial to Exercise Tiger.  Not far from the monument to villagers, who never came home. 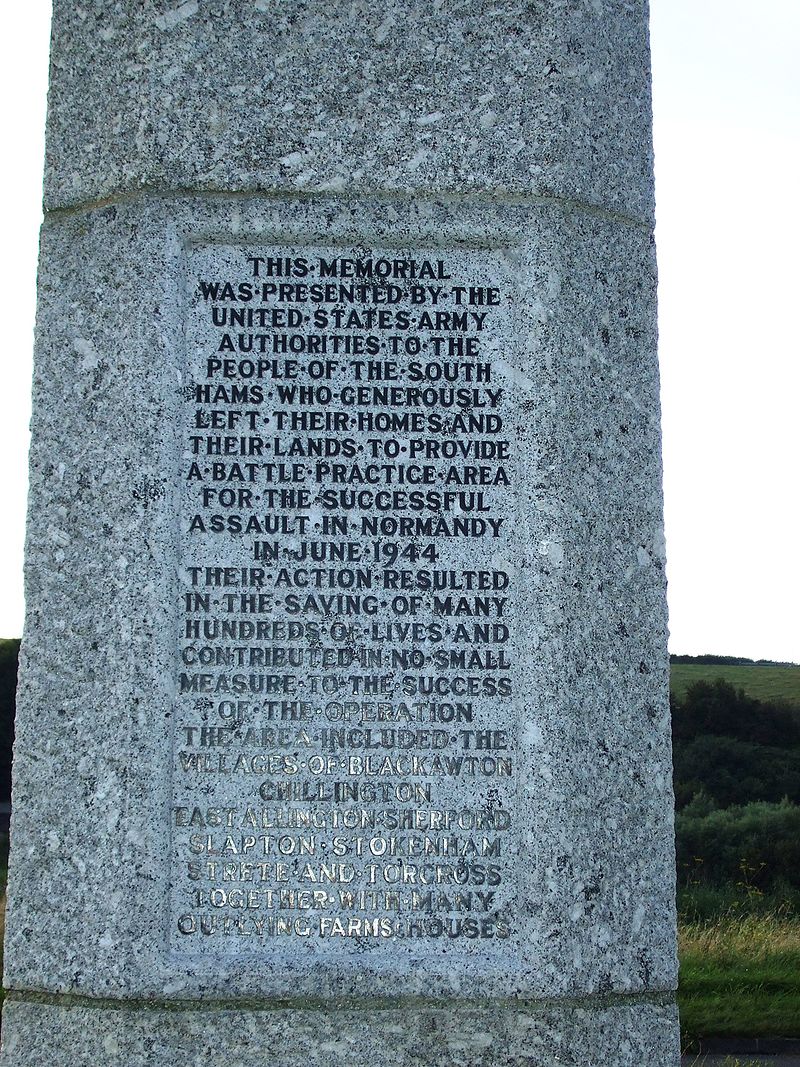 A plaque was erected at Arlington National Cemetery in 1995, inscribed with the words “Exercise Tiger Memorial”. A 5,000-pound stern anchor bears silent witness to the disaster in Mexico, Missouri.

In 2012, a granite memorial was erected at Utah Beach, engraved with the words in French and English: “In memory of the 946 American servicemen who died in the night of 27 April 1944 off the coast of Slapton Sands (G.B.) during exercise Tiger the rehearsals for the D-Day landing on Utah Beach“.

In 1988, volunteers from the Army Brotherhood of Tankers repaired, repainted and re-stenciled an M4 Sherman tank, installing a mirror image of the Slapton memorial at Fort Taber Park in the south-coastal working class city of New Bedford, Massachusetts.

New Bedford veteran’s agent Christopher Gomes lost his right leg during the Iraq War, in 2008.  Gomes was succinct that Memorial Day 2016, when he spoke of this difficult chapter in British/American military history.  “People only die”, he said, “when they are forgotten about″.

Right – The M4 Sherman Tank Tank at the Fort Taber – Fort Rodman Military Museum at Fort Taber Park in New Bedford mirrors the one built to the fallen at Slapton Sands, Devon, England.