The Tudor King Henry VIII began to take control of the English church in 1533, barely 16 years after Martin Luther is said to have nailed his 95 theses to the church door. The Protestant Reformation was barely underway, and both sides would come to regard the other as heretical.

Henry fell out with Pope Clement VII over the latter’s refusal to grant him an annulment from Catherine of Aragon. By 1540, the break between the Church of England and the Church of Rome was complete.

English Catholics became increasingly marginalized for the remainder of Henry’s reign, and that of his daughter, Elizabeth I, who died in 1603 without issue. There were several assassination attempts against Protestant rulers in Europe and England, including a failed plot to poison Elizabeth I, and the assassination of French King Henry III, who was stabbed to death by a Catholic fanatic in 1589.

King James VI of Scotland succeeded the “Virgin Queen” in 1603, to the great disappointment of English Catholics. The moderates among them favored James’ and Elizabeth’s cousin Arbella Stuart, a woman thought to have Catholic sympathies. More radical Catholics looked to the infant daughter of Phillip II of Spain, the Infanta Isabella.

There had already been at least two plots to remove the King from office, when James discovered that his wife, Queen Anne, had secretly received a rosary from the Pope. James responded by denouncing the Catholic Church, ordering Jesuit and all other Catholic priests to leave the country. He re-imposed “recusancy fees”, which had earlier been implemented by Elizabeth. The sum of these fines soon rose to £5,000 a year, equivalent to well over £10 million today.

Among those who believed that ‘faith did not need to be kept with heretics’, regicide seemed the only way out.

The “Gunpowder Plot”, also known as the “Jesuit Treason”, was inspired by Robert Catesby, a man of “ancient, historic and distinguished lineage”.

Catesby, along with about a dozen others, planned to blow up the House of Lords on November 5, 1605, killing King James along with several relatives and members of his Privy Council. This would lead, they thought, to a popular revolt in the Midlands, ending in the installation of James’ 9-year-old daughter, Princess Elizabeth, as the Catholic head of state. 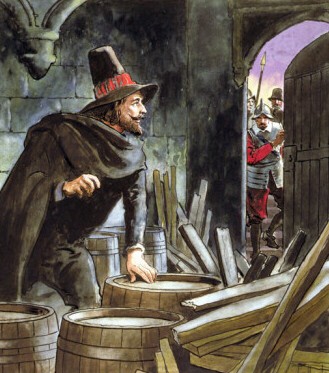 Guy Fawkes, who had 10 years of military experience fighting for the King of Spain in the Netherlands, was put in charge of the explosives.

At least 36 barrels of powder were installed in a room under the House of Lords, when a letter came to light warning of the plot. Two separate searches on the evening of the 4th revealed the gunpowder barrels, hidden under piles of sticks and coal. Guy Fawkes was discovered nearby, carrying slow matches and touchwood.

Fawkes endured several days of torture, increasing in severity, until finally being “broken” on the rack. In January, all but two of the 13 conspirators were hanged, drawn and quartered for their treason. Those two, who had died in their attempt to flee, were dug up and decapitated. Fawkes, though weakened by torture and weeks of confinement in the tower of London, managed to jump off the scaffold and break his neck, sparing himself the ordeal of being cut down and dismembered while still alive.

A stylized version of the “Guy Fawkes Mask” came to be in the 1980s, with a comic book series and its later film adaptation, “V for Victory”. The story depicts a vigilante effort to destroy an authoritarian government in a dystopian future Great Britain.

Since that time, groups ranging from the hacker/activist group Anonymous to Occupy, even radical Libertarians have used the Guy Fawkes mask. A symbol of protest against what they see as out of control, tyrannical government, political and banking institutions.