The next two years, thirty-two states and the District of Columbia celebrated what came to be called “Franksgiving” on the third Thursday of the month, while the remainder observed a more traditional “Republican Thanksgiving”, on the last.  FDR quipped “Two years ago, or three years ago, I discovered I was particularly fond of turkey! So we started two Thanksgivings. I don’t know how many we ought to have next year. I’m open to suggestion.”

In 1863, President Abraham Lincoln declared a general day of Thanksgiving to be observed on the last Thursday of November.  The date seemed to work out OK and the tradition stuck, until 1939.

Roughly two in seven Novembers contain five Thursdays, and that year was one.

In those days, it was considered poor form for retailers to put up Christmas displays or run Christmas sales, before Thanksgiving.  Lew Hahn, General Manager of the Retail Dry Goods Association, was afraid that extra week was going to cut into Christmas sales.

Ten years into the Great Depression with unemployment standing at 17.2%, the Federal government was afraid of the same thing. Never afraid to tinker with precedent, President Franklin Roosevelt decided to deviate from the customary last Thursday, and declared the fourth Thursday, November 23, to be a national day of prayer and thanksgiving.

Opposition to the plan was quick in forming.  Alf Landon, Roosevelt’s Republican challenger in the earlier election, complained of Roosevelt’s impulsiveness, and the confusion resulting from it.  “more time should have been taken working it out” Landon complained, “instead of springing it upon an unprepared country with the omnipotence of a Hitler.”

In Plymouth Massachusetts, home of the first Thanksgiving, Chairman of the Board of Selectmen James Frasier, “heartily disapproved”.  The headline from the New York Times, trumpeted “Roosevelt to Move Thanksgiving: Retailers for It, Plymouth Is Not.”

The short-notice change in holiday schedule disrupted the holiday plans of millions of Americans, to say nothing of traditional high school and college Thanksgiving day football rivalries, across the nation.

Unsurprisingly, support for Roosevelt’s plan split across ideological lines.  A late 1939 Gallup poll reported Democrats favoring the change 52% to 48%, with Republicans opposing it 79% to 21%. 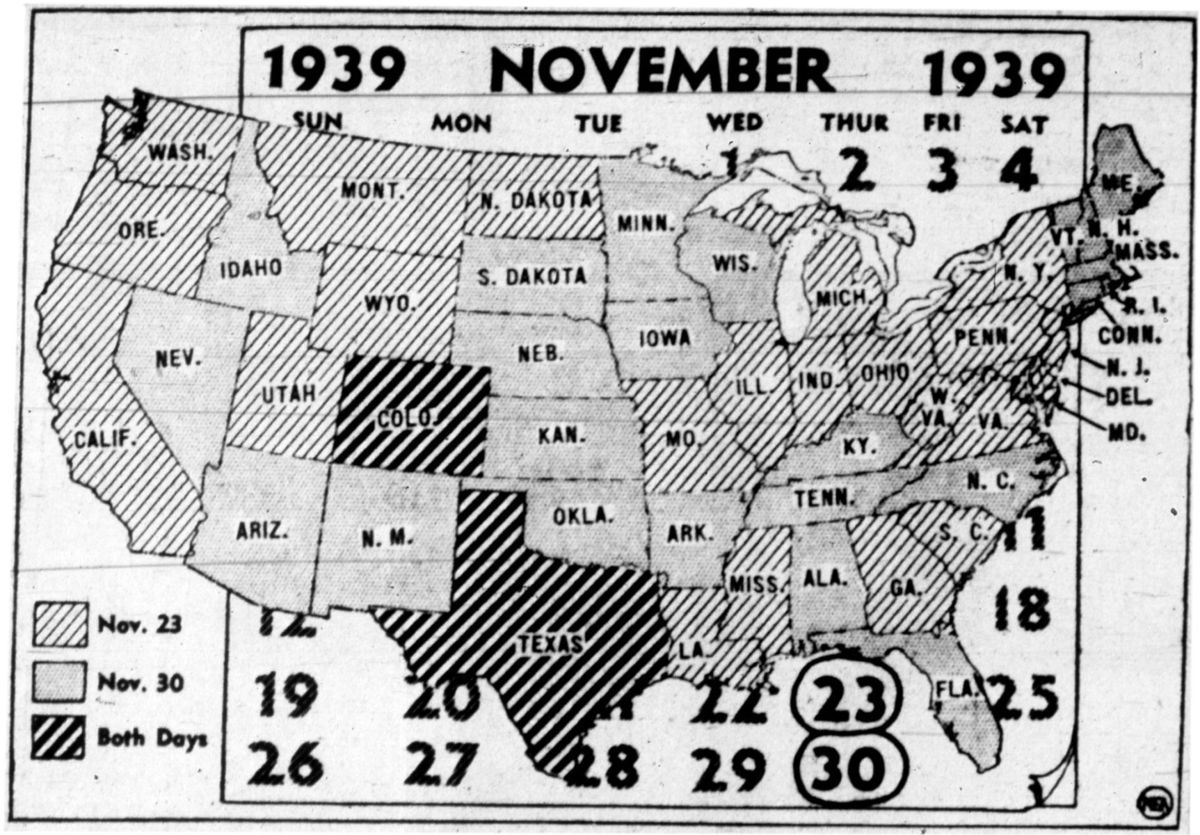 Such proclamations represent little more than the “’moral authority” of the Presidency, and states are free to do as they pleased.  Twenty-three states and the District of Columbia observed Thanksgiving day on the non-traditional date, and twenty-two kept Thanksgiving on the 27th.  Colorado, Mississippi and Texas, did both.

The next two years, thirty-two states and the District of Columbia celebrated what came to be called “Franksgiving” on the third Thursday of the month, while the remainder observed a more traditional “Republican Thanksgiving”, on the last.  FDR quipped “Two years ago, or three years ago, I discovered I was particularly fond of turkey! So we started two Thanksgivings. I don’t know how many we ought to have next year. I’m open to suggestion.”

In 1941, a Commerce Department survey demonstrated little difference in Christmas sales between those states observing Franksgiving, and those observing the more traditional date.  A joint resolution of Congress declared the fourth Thursday beginning the following year to be a national day of Thanksgiving, President Roosevelt signing the measure into law November 26.

Interestingly, the phrase “Thanksgiving Day” had been used only once in the 20th century prior to the 1941 resolution, that in President Calvin Coolidge’s first of six such proclamations.

Most state legislatures followed suit with the Federal fourth-Thursday approach, but not all.  In 1945, the next year with five Thursdays in November, Arkansas, Florida, Georgia, Idaho, Nebraska, Tennessee, Texas, and Virginia reverted to the last Thursday.  Texas would hold out the longest, celebrating its fifth-Thursday Thanksgiving for the last time in 1956.

To this day, the years 1939, ’40 and ’41 remain the only outliers, outside the fourth-Thursday tradition.

Popular comedians of the day got a lot of laughs out of it, including Burns & Allen and Jack Benny.

One 1940 Warner Brothers cartoon shows two Thanksgivings, one “for Democrats” and one a week later “for Republicans.”

Joe Toye, the “Easy Company” character in the 2001 HBO miniseries “A Band of Brothers”, may have had the last word on Franksgiving.  Explaining his plan to get the war over quickly, the paratrooper quips “Hitler gets one of these [knives] right across the windpipe, Roosevelt changes Thanksgiving to Joe Toye Day, [and] pays me ten grand a year for the rest of my f*****g life.”

If you enjoyed this “Today in History”, please feel free to re-blog, “like” & share on social media, so that others may find and enjoy the same. Please click the “follow” button on the right, to receive email updates on new articles.

Thank you for your interest, in the history we all share.