Discussions of a road to Alaska began as early as 1865, when Western Union contemplated plans to install a telegraph wire from the United States to Siberia. The idea picked up steam with the proliferation of automobiles in the 1920s, but it was a hard sell for Canadian authorities. Such a road would necessarily pass through their territory, but the Canadian government felt the project would have little impact, benefiting no more than a few thousand people in the Yukon.

In the days following the attack on Pearl Harbor, Guam and Wake Island fell to Imperial Japanese forces , making it clear that parts of the Pacific coast were vulnerable.

Priorities were changing for both the United States and Canada.

The Alaska Territory was particularly exposed.  Situated only 750 miles from the nearest Japanese base, the Aleutian Island chain had only 12 medium bombers, 20 pursuit planes, and fewer than 22,000 troops in the entire territory, an area four times the size of Texas. Colonel Simon Bolivar Buckner Jr., the officer in charge of the Alaska Defense Command, made the point succinctly. “If the Japanese come here, I can’t defend Alaska. I don’t have the resources.”

The US Army approved construction of the Alaska Highway in February, the project receiving the blessing of Congress and President Roosevelt within the week. Canada agreed to allow the project, provided that the US pay the full cost, and the roadway and other facilities be turned over to Canadian authorities at the end of the war. 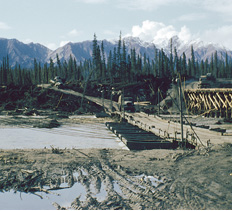 The project had a new sense of urgency in June, when Japanese forces landed on Kiska and Attu Islands, in the Aleutian chain. Adding to that urgency was that there is no more than an eight month construction window, before the return of the deadly Alaskan winter.

Construction began at both ends and the middle at once, with nothing but the most rudimentary engineering sketches. A route through the Rockies had not even been identified yet.

Radios didn’t work across the Rockies and there was only erratic mail and passenger service on the Yukon Southern airline, a run that locals called the “Yukon Seldom”. It was faster for construction battalions at Dawson Creek, Delta Junction and Whitehorse to talk to each other through military officials in Washington, DC.

Moving men to their assigned locations was one thing, moving 11,000 pieces of construction equipment, to say nothing of the supplies needed by man and machine, was another.

Tent pegs were useless in the permafrost, while the body heat of sleeping soldiers meant they woke up in mud. Partially thawed lakes meant that supply planes could use neither pontoon nor ski, as Black flies swarmed the troops by day, and bears raided camps at night, looking for food. 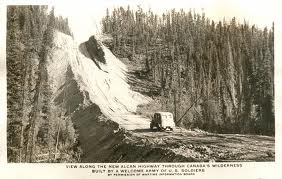 Engines had to run around the clock, as it was impossible to restart them in the cold. Engineers waded up to their chests building pontoons across freezing lakes, battling mosquitoes in the mud and the moss laden arctic bog. Ground that had been frozen for thousands of years was scraped bare and exposed to sunlight, creating a deadly layer of muddy quicksand in which bulldozers sank in what seemed like stable roadbed.

On October 25, Refines Sims Jr. of Philadelphia, with the all-black 97th Engineers was driving a bulldozer 20 miles east of the Alaska-Yukon line, when the trees in front of him toppled to the ground. He slammed his machine into reverse as a second bulldozer came into view, driven by Kennedy, Texas Private Alfred Jalufka. North had met south, and the two men jumped off their machines, grinning. Their triumphant handshake was photographed by a fellow soldier and published in newspapers across the country, becoming an unintended first step toward desegregating the US military.

They celebrated the route’s completion at Soldier’s Summit on November 21, 1942, though the “highway” remained unusable by most vehicles, until 1943.

NPR ran an interview about this story back in the eighties, in which an Inupiaq elder was recounting his memories. He had grown up in a world as it existed for hundreds of years, without so much as an idea of internal combustion. He spoke of the day that he first heard the sound of an engine, and went out to see a giant bulldozer making its way over the permafrost. The bulldozer was being driven by a black operator, probably one of the 97th Engineers Battalion soldiers. I thought the old man’s comment was a classic. “It turned out”, he said, “that the first white person I ever saw, was a black man”.