The men who built the Tacoma Narrows Bridge used to suck lemons on the job site, to keep from becoming seasick. It was probably one of these “boomers” who first noticed how the bridge rippled in the wind. Someone  called it “Galloping Gertie”, and the name stuck. 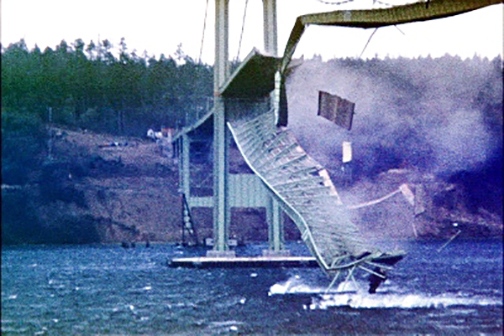 The name “Galloping Gertie” was first used to describe a 900′ bridge over the Ohio River in Wheeling, West Virginia. Built in 1849, it was the longest suspension bridge in the world at the time, until collapsing in a windstorm in May, 1854.

The Tacoma Narrows Bridge had been designed by one of the most respected bridge engineers of its time. Federal and state experts all approved the plans, when construction began in 1937. When finished, it was the third longest suspension bridge in the world. 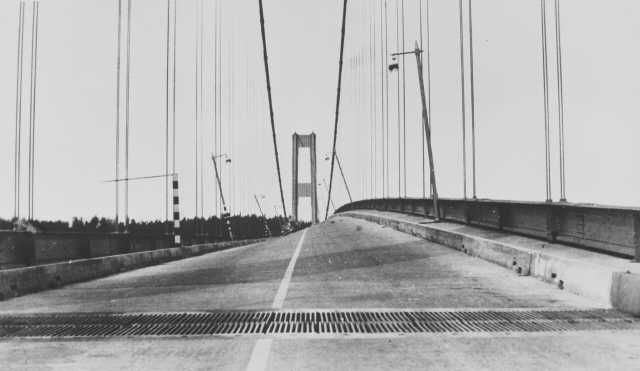 The deck’s vertical wave motions, or “bounce”, were noted as early as May 1940, as workmen finished the bridge’s floor system. As with the 790’ John Hancock Tower in Boston, the bridge would literally twist in the wind. The solution was similar in both cases.  Engineers installed hydraulic buffers, pistons called “Tuned Mass Dampers,” to act as shock absorbers. The tactic worked for the John Hancock building, which, mercifully, no longer ejects 4’x11’, 500lb glass panels onto the street below.

The tactic made little to no improvement on the bridge. 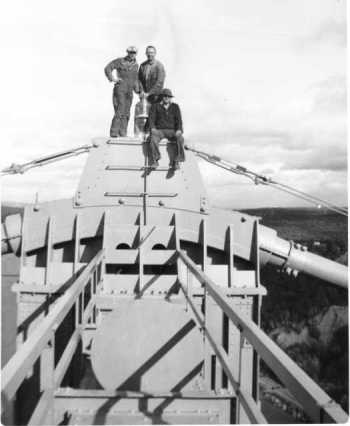 The men who built it used to suck lemons on the job site, to keep from becoming seasick. It was probably one of these “boomers” who first noticed how the bridge rippled in the wind. Someone  called it “Galloping Gertie”, and the name stuck.

Carol Peacock, a student at nearby Fife High School, sat down to do her homework on the evening of November 6, 1940. She was taking a journalism class.  Her assignment was to write an essay beginning with, “Just suppose . . .” She called her essay, “Tacoma Narrows Bridge Collapses.” Nostradamus could not have called it better. The bridge came down the next day.

Leonard Coatsworth, a Tacoma News Tribune editor, entered the span some time before 11:00am on November 7, the last person to drive onto the bridge. “Just as I drove past the towers”, he said, “the bridge began to sway violently from side to side. Before I realized it, the tilt became so violent that I lost control of the car…I jammed on the brakes and got out, only to be thrown onto my face against the curb…Around me I could hear concrete cracking…The car itself began to slide from side to side of the roadway. On hands and knees most of the time, I crawled 500 yards or more to the towers…Toward the last, I risked rising to my feet and running a few yards at a time…Safely back at the toll plaza, I saw the bridge in its final collapse and saw my car plunge into the Narrows.” 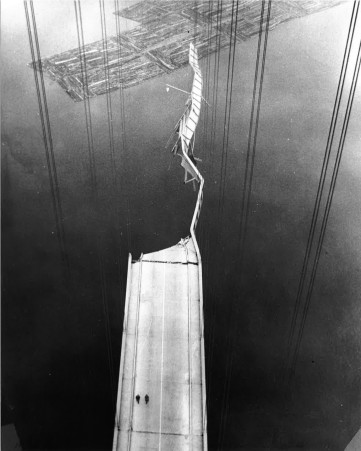 The bridge was bucking so violently that at times, one sidewalk rose as high as 28’ above its opposite.

Frederick Bert Farquharson was a professor of civil engineering at the University of Washington. He’d been retained to help fix the bridge, and was on the span on the morning of the 7th. Professor Farquharson noticed “Tubby”, a black Cocker Spaniel, cowering in the back of Coatsworth’s abandoned car. He tried to rescue the terrified dog, but all he got was a bite on the hand. Driven by the desire to record the engineering science and delayed by the failed rescue attempt, Professor Farquharson was the last to leave the span. Tubby went down with the bridge, the only life lost in the incident.

The bridge remains at the bottom of Puget Sound to this day, one of the largest artificial reefs, in the world.

Photographer Howard Clifford and reporter Bert Brintnall covered the story for the Tacoma News Tribune. The pair had noticed a billboard ad that morning, for the Pacific National Bank. “As secure as the Narrows Bridge,” it read. They returned fewer than two hours after the collapse, wanting to photograph the billboard for their story. Workmen had already covered the sign with white paper.