Reporting on Kapaun’s Medal of Honor, the NY Times wrote “The chaplain “calmly walked through withering enemy fire” and hand-to-hand combat to provide medical aid, comforting words or the last rites of the Roman Catholic Church to the wounded, the citation said. When he saw a Chinese soldier about to execute a wounded comrade, Sgt. First Class Herbert A. Miller, he rushed to push the gun away. Mr. Miller, now 88, was at the White House for the ceremony with other veterans, former prisoners of war and members of the Kapaun family”.

Emil Joseph Kapaun was the son of Czech immigrants, a farm kid who grew up in 1920s Kansas. Graduating from Pilsen High, class of 1930, Kapaun spent much of the 30s in theological seminary, becoming an ordained priest of the Roman Catholic faith on June 9, 1940.

Kapaun served as military chaplain toward the end of WWII, before leaving the army in 1946 and rejoining in 1948.

Chaplain Kapaun was ordered to Korea a month after the North invaded the South, joining the 8th Cavalry Regiment of the 1st Cavalry Division, out of Fort Bliss.

The 8th Cav. entered combat at the Pusan perimeter, moving steadily northward through the summer and fall of 1950.  Father Kapaun would minister to the dead and dying, performing baptisms, hearing first confessions and offering holy communion.  He would celebrate mass from an improvised altar, set up on the hood of a jeep.

Kapaun once lost his mass kit to enemy fire. He earned a Bronze Star in September that year, running through intense enemy fire to rescue a wounded soldier. His was no rear-echelon ministry.

A single regiment was attacked by the entire 39th Chinese Corps on November 1, and completely overrun the following day.  For the US 8th Cavalry, the battle of Unsan was one of the most devastating defeats of the Korean War. Father Kapaun was ordered to evade, an order he deliberately defied. He was performing last rites for a dying soldier, when he was seized by Chinese communist forces.

Prisoners were force marched 87 miles to a Communist POW camp near Pyoktong, in North Korea. Conditions in the camp were gruesome. 1st Lieutenant Michael Dowe was among the prisoners.  Through him that we know much of what happened there. Dowe later described Father Kapaun trading his watch for a blanket, only to cut it up to fashion socks for the feet of prisoners.

Chinese Communist guards would taunt Kapaun, during daily indoctrination sessions, “Where is your god now?” Before and after these sessions, he would move through the camp, ministering to Catholic and non-Catholic alike. Kapaun would slip in behind every work detail, cleaning latrines while other prisoners argued over who’d get the job. He’d wash the filthy laundry of those made weak and incontinent with dysentery.

Starving, suffering from a blood clot in his leg and a severe eye infection, Father Kapaun led Easter services in April, 1951. He was incapacitated a short time later. Guards carried him off to a “hospital”, a fetid, stinking part of the camp known to prisoners as the “death house”, from which few ever returned. “If I don’t come back”, he said, “tell my Bishop that I died a happy death.”

Scores of men credit their survival at Pyoktong, to Chaplain Kapaun.

In the end, Father Kapaun was too weak to lift the plate holding the meager meal his guards left him. US Army records report that he died of pneumonia on May 6, 1951.  His fellow POWs will tell you that he died on May 23, of malnutrition and starvation. He was 35.

In 2013, President Barack Obama presented Kapaun’s family with a posthumous Medal of Honor for his heroism at Unsan. The New York Times reported that April, “The chaplain “calmly walked through withering enemy fire” and hand-to-hand combat to provide medical aid, comforting words or the last rites of the Roman Catholic Church to the wounded, the citation said. When he saw a Chinese soldier about to execute a wounded comrade, Sgt. First Class Herbert A. Miller, he rushed to push the gun away. Mr. Miller, now 88, was at the White House for the ceremony with other veterans, former prisoners of war and members of the Kapaun family“.

The naming of a Saint of the Roman Catholic church is not a process taken lightly.  Pope John Paul II named Father Kapaun a “Servant of God” in 1993, the first step toward Sainthood. On November 9, 2015, the Catholic Diocese of Wichita submitted a 1,066 page report on the life of Chaplain Kapaun, to the Roman Curia at the Vatican.

A team of six historians reviewed the case for beatification. On June 21, 2016, the committee unanimously approved the petition. Two days later, the Wichita Eagle newspaper reported that Father Kapaun was one step closer to sainthood.  At the time I write this, Father Emil Joseph Kapaun’s supporters continue working to have him declared a Saint of the Roman Catholic Church, for his lifesaving ministrations at Pyoktong. 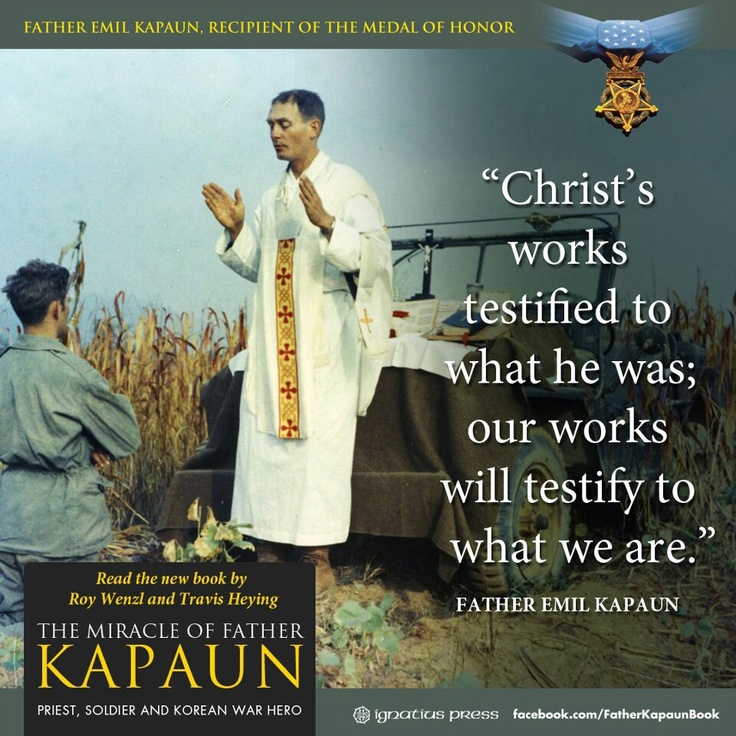 One thought on “November 2, 1950 A Shepherd in Combat Boots”