The $1 million the Confederate government sunk into their Canadian office, probably did them more harm than good.  Those resources could have been put to better use. 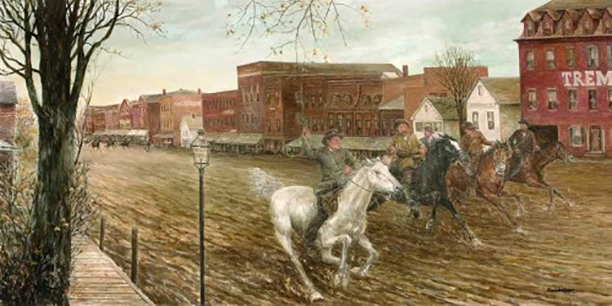 In the late 18th century, lands granted by the governor of New Hampshire led the colonial province into conflict with the neighboring province of New York.  Conflict escalated over jurisdiction and appeals were made to the King, as the New York Supreme Court invalidated these “New Hampshire grants”.  Infuriated residents including Ethan Allen and his “Green Mountain Boys” rose up in anger.  Two natives of Westminster Vermont, then part of the New Hampshire land grants, were killed on March 13, 1775, by British Colonial officials.  Today, the event is remembered as the “Westminster Massacre”.

The battles at Lexington and Concord broke out a month later, ushering in a Revolution and eclipsing events to the north.  New York consented to admitting the “Republic of Vermont” into the union in 1790, ceding all claims on the New Hampshire land grants in exchange for a payment of $30,000.  Vermont was admitted as the 14th state on March 4, 1791, the first state so admitted following the adoption of the federal Constitution.

Organized in 1785, St. Albans forms the county seat of Franklin County, Vermont.  15 miles from the Canadian border and situated on the eastern shore of Lake Champlain, it’s not the kind of place you’d expect, for a Civil War story.

The Confederate States of America maintained government operations in Canada, from the earliest days of the Civil War.  Toronto was a logical relay point for communications with Great Britain, from whom the Confederate government sought unsuccessfully to gain support.

Former member of Congress and prominent Ohio “Peace Democrat” Clement Vallandigham fled the United States to Canada in 1863, proposing to detach the states of Illinois, Indiana and Ohio from the Union, in exchange for sufficient numbers of Confederate troops to enforce the separation.  Vallandigham’s five-state “Northwestern Confederacy” would include Kentucky and Missouri, breaking the Union into three pieces.  Surely that would compel Washington to sue for peace. 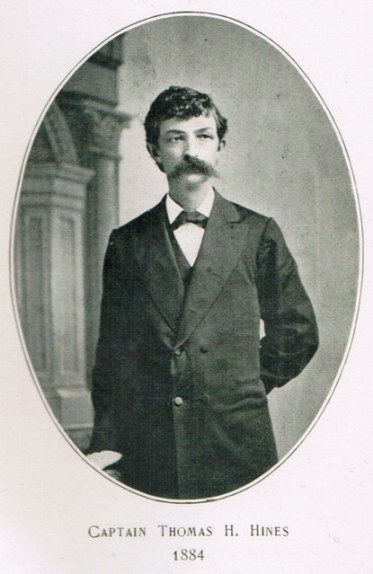 This was no small undertaking. A sizeable minority of Peace Democrats calling themselves “Copperheads” were already in vehement opposition to the war.  So much so that General Ambrose Burnside declared in his General Order No. 38, that “The habit of declaring sympathy for the enemy will not be allowed in this” (Ohio) “department. Persons committing such offenses will be at once arrested with a view of being tried. . .or sent beyond our lines into the lines of their friends. It must be understood that treason, expressed or implied, will not be tolerated in this department“.

Hines and fellow Confederates worked closely with Copperhead organizations such as the Knights of the Golden Circle, the Order of the American Knights, and the Sons of Liberty, to foment uprisings in the upper Midwest.

In the late Spring and early Summer of 1864, residents of Maine may have noted an influx of “artists”, sketching the coastline.  No fewer than fifty in number, these nature lovers were in fact Confederate topographers, sent to map the Maine coastline. 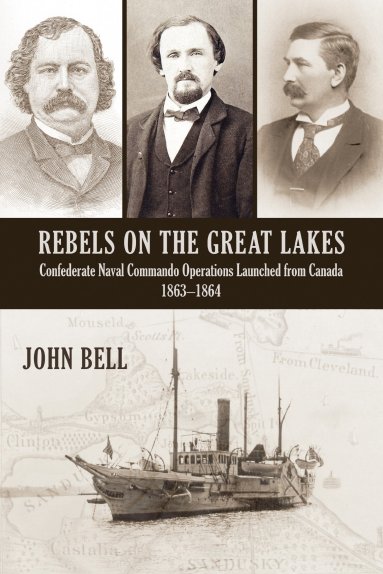 The Confederate invasion of Maine never materialized, thanks in large measure to counter-espionage efforts by Union agents.

The invasion failed to materialize, but three men declaring themselves to be Confederates were captured on Main Street in Calais, preparing to rob a bank.

Captain Hines planned an early June uprising in the Northwest, timed to coincide with a raid planned by General John Hunt Morgan.  Another uprising was planned for August 29, timed with the 1864 Democratic Convention in Chicago.   It seems the conspirators’ actions didn’t quite live up to the heat of their rhetoric, and both operations fizzled.  A lot of these guys were more talk than action, yet Captain Hines continued to send enthusiastic predictions of success, back to his handlers in Richmond.

The Toronto operation tried political methods as well, supporting Democrat James Robinson’s campaign for governor of Illinois.  If elected they believed, Robinson would turn over the state’s militia and arsenal to the Sons of Liberty.  They would never know.  Robinson lost the election.

All this cost money, and lots of it.  In October 1864, the Toronto operation came to St. Albans, to make a withdrawal.

Today, St. Albans is a quiet town of 6,918.  In 1864 the town was quite wealthy, home to manufacturing and repair facilities for railroad locomotives.  Located on a busy rail line, St. Albans was also home to four banks.

Nicholasville, Kentucky native Bennett Henderson Young was a member of the Confederate 8th Kentucky Cavalry, captured during Morgan’s 1863 raid into Ohio.  By January, Young had escaped captivity and fled to Canada. On October 10, Bennett crossed the Canadian border with two others, taking a room at the Tremont House, in St. Albans.  The trio said they had come for a “sporting vacation”.

In the following days, small groups filtered into St. Albans, quietly taking rooms across the town.  There were 21 of them, former POWs and cavalrymen all, hand selected by Young for their daring and resourcefulness.

On October 19 the group split up.  Announcing themselves to be Confederate soldiers, groups of them simultaneously robbed three of St. Albans’ four banks, while eight or nine held the townspeople at gunpoint, on the village green.  One resident was killed before it was over and another wounded. Young ordered his troops to burn the town, but the bottles of “Greek Fire” they carried for the purpose, failed to ignite.  Only one barn was burned down and the group got away with a total of $208,000, and all the horses they could find. It was the northernmost Confederate action of the Civil War. 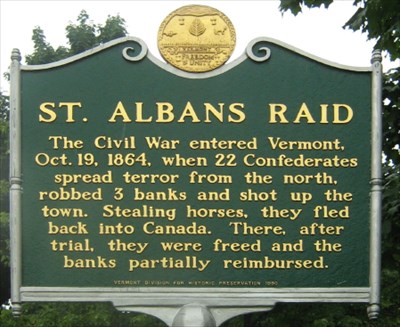 The group was arrested on returning to Canada and held in Montreal.  The Lincoln administration sought extradition, but the Canadian court decided otherwise, ruling that the raiders were under military orders at the time, and neutral Canada could not extradite them to America.  The $88,000 found with the raiders, was returned to Vermont.

The $1 million the Confederate government sunk into their Canadian office, probably did them more harm than good.  Those resources could have been put to better use, but we have the advantage of hindsight.  Neither Captain Hines nor Jefferson Davis could know how their story would turn out.  In the end, they both fell victim to that greatest of human weaknesses, of believing what they wanted to believe. 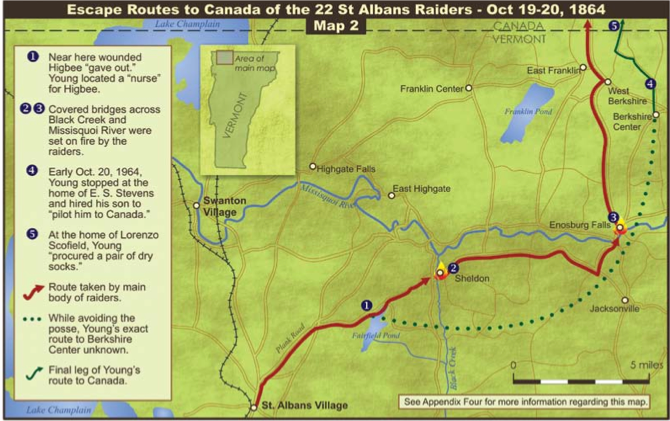