Marie-Antoinette’s hair was cut off on October 16, 1793. She was driven through Paris in an ox cart, taken to the Place de la Révolution, and decapitated. She accidentally stepped on the executioner’s foot on mounting the scaffold.  Her last words were “Pardon me sir, I meant not to do it”.

Alliances came and went throughout 18th century Europe, and treaties were often sealed by arranged marriages. One such alliance took place in 1770 when Francis I, Holy Roman Emperor and his wife Maria Theresa, the formidable Queen of Hungary and Bohemia, married their daughter Maria Antonia to Louis-Auguste, the son of Louis XV, King of France.

The happy couple had yet to meet when the marriage was performed by proxy, the bride remaining in Vienna while the groom stayed in Paris. At 12 she was now the Dauphine, Marie Antoinette, wife of the 14-year-old Dauphin, future King of France.

There was a second, ceremonial wedding held in May, after which came the ritual bedding. This wasn’t the couple quietly retiring to their own private space.  This was the bizarre spectacle of a room full of courtiers, peering down at the proceedings, to make sure the marriage was consummated.

It was not, and that failure did damage to both of their reputations.

The people liked their new Dauphine at first, but the Royal Court was another story. They had promoted several Saxon Princesses for the match, and called Marie Antoinette “The Austrian Woman”.  She would be called far worse.

The stories you read about 18th century Court intrigue make you wonder how anyone lived like that. Antoinette was naive of the shark tank into which she’d been thrown. Relations were especially difficult with the King’s mistress, the Comtesse du Barry, and Antoinette was somehow expected to work them out. The King’s daughters, on the other hand, didn’t care for du Barry’s unsavory relations with their father. Antoinette couldn’t win. The sisters complained of feeling “betrayed” one time, when Antoinette commented to the King’s mistress “There are a lot of people at Versailles today”.

Court intrigues were accompanied by reports to Antoinette’s mother in Vienna, the Empress responding with her own stream of criticism. The Dauphin was more interested in lock making and hunting, she wrote, because Antoinette had failed to “inspire passion” in her husband. The Empress even went so far as to tell her daughter that she was no longer pretty. She had lost her grace. Antoinette came to fear her own mother more than she loved her. 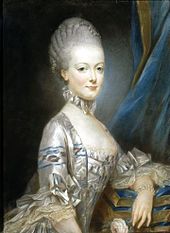 Louis-Auguste was crowned Louis XVI, King of France, on June 11, 1775. Antoinette remained by his side, though she was never crowned Queen, instead remaining Louis’ “Queen Consort”.

With her marriage as yet unconsummated, Antoinette’s position became precarious when her sister in law gave birth to a son and possible heir to the throne. Antoinette spent her time gambling and shopping, while wild rumors and printed pamphlets described her supposedly bizarre sexual romps.

France had serious debt problems in the 1770s, the result of endless foreign wars, but Antoinette received more than her share of the blame. As first lady to the French court, Antoinette was expected to be a fashion trendsetter. Her shopping was in keeping with the role, but rumors wildly inflated her spending habits. Her lady-in-waiting protested that her habits were modest, visiting village workshops in a simple dress and straw hat. Nevertheless, Antoinette was rumored to have plastered the walls of Versailles with gold and diamonds.

The difficult winter of 1788-89 produced bread shortages and rising prices as the King withdrew from public life. The marriage had produced children by this time, but the legend of the licentious spendthrift and empty headed foreign queen took root in French mythology, as government debt overwhelmed the economy.

French politics boiled over in June 1789, leading to the storming of the Bastille on July 14. Much of the French nobility fled as the newly formed National Constituent Assembly conscripted men to serve in the Garde Nationale, while the French Constitution of 1791 weakened the King’s authority.

Food shortages magnified the unrest. In October, the King and Queen were placed under house arrest in the Tuileries Palace. In June they attempted to flee the escalating violence, but were caught and returned within days. Radical Jacobins exploited the escape attempt as a betrayal, and pushed to have the monarchy abolished altogether.

Unrest turned to barbarity as Antoinette’s friend and supporter, the Princesse de Lamballe, was taken by the Paris Commune for interrogation. She was murdered at La Force prison, her head fixed on a pike and marched through the city.

Louis XVI was charged with undermining the First Republic in December 1792, found guilty and executed by guillotine on January 21, 1793. He was 38.

Marie-Antoinette became prisoner #280, her health deteriorating in the following months. She suffered from tuberculosis by this time and was frequently bleeding, possibly from uterine cancer.

Antoinette was taken from her cell on October 14, subjected to a sham trial whose outcome was never in doubt. She was accused of molesting her own son, a charge so outrageous that even the market women who had stormed the palace demanding her entrails in 1789, spoke in her support. “If I have not replied”, she said, “it is because nature itself refuses to respond to such a charge laid against a mother.”

Marie-Antoinette’s hair was cut off on October 16, 1793. She was driven through Paris in an ox cart, taken to the Place de la Révolution, and decapitated. She accidentally stepped on the executioner’s foot on mounting the scaffold.  Her last words were “Pardon me sir, I meant not to do it”.

“Let them eat cake” is often attributed to Marie Antoinette, but there’s no evidence that she ever said it. The phrase appears in the autobiography of Jean-Jacques Rousseau, “Les Confessions”, attributed to a “Grande Princesse” whom the book declines to name. Considering the lifetime of cheap and mean-spirited gossip to which Marie Antoinette was subjected, it’s easy to believe that this was more of the same.