Christians and Jews had had relatively cordial relations with the Caliphs who had come before, but Al-Hakim was different. Some believed his every action to be right and just, others that he was overcompensating for being borne of a Christian mother. Many believed he was simply insane.

According to Christian tradition, Jesus of Nazareth was condemned to death in the year 33AD. He was crucified on Mount Golgotha, his body buried in a tomb carved out of the rock of a nearby garden. After three days, Jesus rose from the dead. From that moment to this, the Tomb of the Resurrection has been at the center of all Christian faith.

In 132, the Roman Emperor Hadrian all but erased all sign of Jewish and Christian presence, in the old city of Jerusalem. Golgotha and the Tomb were obliterated, and a pagan temple to Venus Aphrodite was raised in their place.

Constantine the Great, Rome’s first Christian Emperor, destroyed the pagan temple in the 330s, bringing the tomb back to light and building a magnificent complex on the site.  The Church of the Holy Sepulchre.

It was almost 300 years later that, according to Islamic faith, the Angel Gabriel revealed the Word of God (Allah) to the prophet Muhammad.   In the years following the death of Muhammad in 632, the armies of the Rashidun or “Rightly Guided” Caliphs swept across the Arabian peninsula and laid siege to Jerusalem, conquering the city in 637.  The Rashidun Caliphate was replaced by the Umayyad a short 24 years later, only to be replaced by the Abbassid, in 750.  Within 400 years, these first three Caliphates in the history of Islam had expanded the faith from the borders of China and India, to Visigothic Spain.  Five million square miles, larger than any modern state, with the sole exception of the Russian Federation.

In the years that followed, Jews and Christians were able to practice their faith in the conquered city with varying degrees of freedom. That came to an end in 1009. 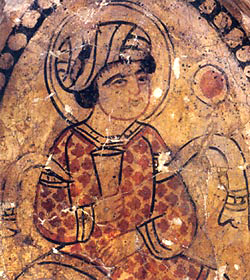 Al-Hakim bi-Amr Allah, (literally “Ruler by God’s Command”) was the 6th Caliph of the Fatimid Dynasty, coming to power in October of 996.

He was the “Mad Caliph”, the “Nero of Islam”. In September of 1009, Al-Hakim ordered the destruction of all churches, synagogues, Torah scrolls and other religious artifacts throughout Jerusalem, Syria and Egypt. Most especially the Church of the Holy Sepulchre, whose destruction was carried out on this day, October 18, 1009.

The Church of Calvary and the Martyrium were demolished, and the Edicule of the Tomb dismantled.  Furnishings and equipment were stolen or destroyed.  So complete was its destruction that the rock beneath its foundation was hacked, and then the rubble set ablaze.  Only remnants of the Constantinian structures of the Anastasis remained, submerged under demolition debris.

All of Christendom recoiled in horror, at the desecration.  It was no small part of what led to the 1st Christian Crusade to retake Jerusalem, though that wouldn’t take place for another 100 years.

Unlike the Fatimid Caliphs who came before, Al-Hakim persecuted the “dhimmis” under his control, launching campaigns of destruction throughout Palestine and Syria in 1011 and again in 1013-14.

The reasons are unclear.   Christians and Jews had had relatively cordial relations with the Caliphs who had come before, but Al-Hakim was different. Some believed his every action to be right and just, others that he was overcompensating for being borne of a Christian mother.

Many believed he was simply insane.

Al-Hakim became increasingly erratic in the following years, issuing edicts forbidding the eating of certain foods, dictating what fishermen were permitted to catch, and prohibiting chess. Women were proscribed from going outside.  Shoemakers were forbidden from making women’s shoes. One day he ordered Christians and Jews to convert to Islam, the next day he’d rescind the order. Hakim would personally murder or cut off the hands of slave or dignitary, without warning, and without reason.  He was feared by Muslim and Christian emissaries alike.

The Church of the Holy Sepulchre was rebuilt between 1042-1055 with funding from Byzantine emperor Constantine IX Monomachus, though it would never regain the magnificence of Constantine’s original structure.

Al-Hakim himself went out for a ride one night in October 1021, and never returned. All that was ever found of him was his blood stained clothing, and his donkey.