Rags survived our nation’s deadliest battle with the loss of an eye, but Donovan wasn’t so lucky. He was severely gassed and the two were brought to the rear. If anyone asked about expending medical care on a dog, they were told that it was “orders from headquarters”. 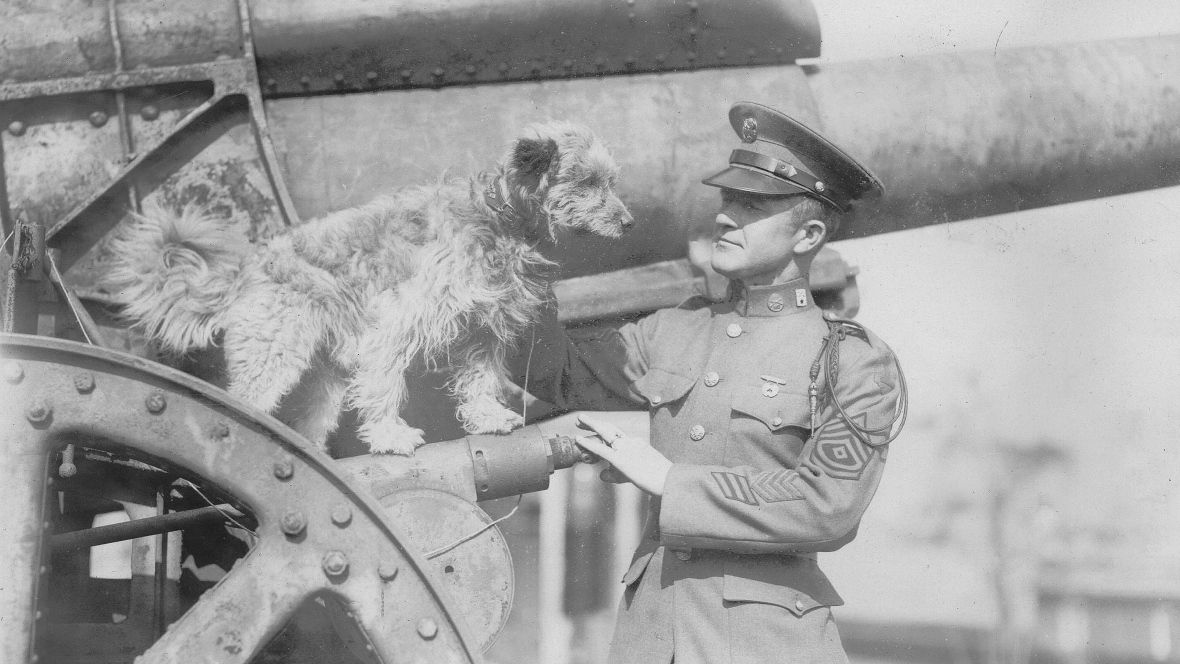 Private James Donovan was AWOL.  He had overstayed his leave in the French town of Montremere, and the ‘Great War’, awaited.

When the two MPs found him, Donovan knew he had to think fast. He reached down and grabbed a stray dog, explaining to the two policemen that he was part of a search party, sent out to find the Division Mascot.

It was a small dog, possibly a Cairn Terrier mix. He looked like a pile of rags, and that’s what they called him.  The dog had gotten Donovan out of a jam, now he would become the division mascot for real. Rags was now part of the US 1st Infantry Division, the Big Red One.

Instead of “shaking hands”, Donovan taught him a sort of doggie “salute”.  Rags would appear at the flag pole for Retreat for years after the war, lifting his paw and holding it by his head.  Every time the flag was lowered and the bugle played, there was that small terrier, saluting with the assembled troops.

Donovan’s job was hazardous. He was on the front lines, stringing communications wire between advancing infantry and supporting field artillery. Runners were used to carry messages until the wire was laid, but they were frequently wounded, killed or they couldn’t get through the shell holes and barbed wire.

The dog learned to imitate the men around him, who would drop to the ground and hug it tightly during artillery barrages. He would hug the ground with his paws spread out, soon the doughboys noticed him doing it before any of them knew they were under fire. Rags’ acute and sensitive hearing became an early warning system, telling them that shells were incoming well before anyone heard them.

Donovan trained Rags to carry messages attached to his collar.  On October 2, 1918, Rags carried a message from the 26th Infantry Regiment to the 7th Field Artillery.  The small dog’s successful mission resulted in an artillery barrage, leading to the capture of the Very-Epinonville Road.

An important objective had been taken, with minimal loss of life to the American side.

Rags was small and fast, and often ran messages across open battlefield. The terrier’s greatest trial came a week later, during the Meuse-Argonne Campaign. The small dog ran through falling bombs and poison gas to deliver his message. Mildly gassed and partially blinded, shell splinters damaged his right paw, eye and ear. Rags survived and, as far as I know, got his message where it needed to be.

Rags survived our nation’s deadliest battle with the loss of an eye, but Donovan wasn’t so lucky. He was severely gassed and the two were brought to the rear. If anyone asked about expending medical care on a dog, they were told that it was “orders from headquarters”.

Rags recovered quickly, but Donovan did not.  Donovan was transferred to the United States, and brought to the Fort Sheridan base hospital near Chicago, where medical staff specialized in gas cases.  It was here that the dog was given a collar and tag, identifying him as 1st Division Rags.  Donovan died of his injuries, in early 1919.  Rags moved into the base fire house becoming “post dog”, until being adopted by Major Raymond W. Hardenbergh, his wife and two daughters, in 1920.

The 1st Division marched down Broadway in 1928, part of the division’s 10th anniversary WW1 reunion, a small terrier-mix in the vanguard.

Rags lived out the last of his years in Maryland.  A long life it was, too, the dog lived until 1934, remaining the 1st Infantry Division for all his 20 years.