Of all the hundreds of amphibious landings carried out in WW2, no other soldier ever stepped off a landing craft with bow and arrow and Scottish broadsword. Usually, while playing bagpipes. 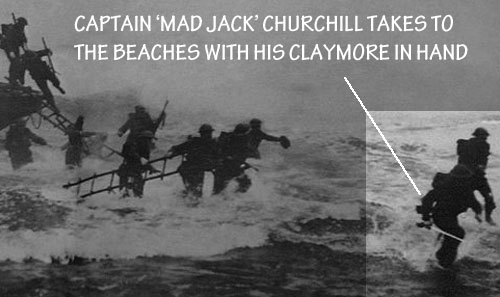 A child was born on this day in 1906.  He was John Malcolm Thorpe Fleming Churchill, the first son and grandson of British civil servants in the Ceylon Civil Service.  The family lived in Hong Kong at the time, returning to England in 1917.  “Jack” graduated from the Royal Military College at Sandhurst, serving in Burma with the Manchester Regiment, before leaving the military, ten years later.

Churchill worked as a newspaper editor for a time in Nairobi Kenya, along with an occasional career as male model, and a couple appearances in motion pictures.  From there he might have faded into obscurity, unlike his fellow Englishman of no relation, with the same last name.  Then came World War II, where John Churchill would earn the name, “Mad Jack”.

It was around this time that Churchill learned to play bagpipes, a bit of an eccentricity for an Englishman of his era.  Mad Jack was nothing if not eccentric.  He also taught himself to shoot a bow and arrow, becoming quite good at it.  Good enough to represent his country in the world archery championship in Oslo, in 1939.

Churchill resumed his military commission and rejoined the Manchester Regiment later that year, when Germany invaded Poland.  Part of the British Expeditionary force to France in 1940, Churchill signaled an ambush on a German unit, by taking its Feldwebel (staff sergeant) out with a broadhead arrow.  No one could have been more surprised than that German NCO, whose dying thought must have been “How did I get an arrow in my chest?”

The unfortunate German is, to my knowledge, the only combatant in all of WWII, to be felled by an English longbow.

Not long after, allied military forces were hurled from the beaches of Europe.  The only way back in, was via those same beaches.  We’ve all seen the D-Day style waterborne assault:  invading forces pouring out of Higgins Boats and charging up the beaches.  Amphibious landings were carried out from the earliest days of WWII, from Norway to North Africa, from the Indian Ocean to Italy.  In all those landings, there’s likely no other soldier who stepped off a Higgins Boat, with a bow and arrows.

On December 27, 1941, #3 Commando raided the German garrison at Vågsøy, Norway. As the ramp dropped on the first landing craft, out jumped Mad Jack Churchill playing “March of the Cameron Men” on the bagpipes, before throwing a grenade and charging into battle.  Mad Jack made several such landings, usually while playing his bagpipes, a Scottish broadsword at his belt.

Churchill was attached to that sword, a basket hilted “Claybeg”, a slightly smaller version of the Scottish Claymore.  He said “Any officer who goes into action without his sword is improperly dressed.” Mad Jack could be seen at the Catania (Sicily) and Salerno landings of 1943, trademark broadsword at his belt, bagpipes under an arm and an English longbow and arrows, around his neck.

Churchill lost the sword in confused, hand to hand fighting around the town of Piegoletti, for which he received the Distinguished Service Order.  Almost single-handed but for a corporal named Ruffell, Churchill captured 42 Germans including a mortar squad.   “I always bring my prisoners back with their weapons”, he explained.  “It weighs them down. I just took their rifle bolts out and put them in a sack, which one of the prisoners carried. [They] also carried the mortar and all the bombs they could carry and also pulled a farm cart with five wounded in it….I maintain that, as long as you tell a German loudly and clearly what to do, if you are senior to him he will cry ‘Jawohl’ and get on with it enthusiastically and efficiently whatever the … situation. That’s why they make such marvelous soldiers…”  It looked, he said, like “an image from the Napoleonic Wars.”

Churchill later trudged back to town, to collect his sword.  He encountered an American squad along the way, who seemed to have lost themselves and were headed toward German lines.  When the NCO refused to turn around, Churchill informed him that he was going to be on his way, and he “wouldn’t come back for a bloody third time”.

Mad Jack’s luck ran out in 1944 on the German-held, Yugoslavian island of Brac.  He was leading a Commando raid at the time, in coordination with Josip Broz Tito’s Partisans.  Only Churchill and six others managed to reach the top of hill 622, when a mortar shell killed or wounded everyone but Churchill himself.  He was knocked unconscious by a grenade and captured.

He’d been playing “Will Ye No Come Back Again?” on his pipes.

Hitler’s infamous ‘Commando Order” had long since taken effect, and Churchill and his surviving men escaped immediate execution at the hands of the Gestapo, thanks to the decency of one Wehrmacht Captain Thuener. “You are a soldier“, he said, “as I am. I refuse to allow these civilian butchers to deal with you. I shall say nothing of having received this order.” Churchill was able to pay Thuener back for his kindness after the war, keeping him out of the merciless hands of the Red Army.

Churchill was flown to Berlin and interrogated on suspicion that he might be related to the more famous Churchill, before being sent off to Sachsenhausen concentration camp in Oranienburg, Germany.  There, Mad Jack and Royal Air Force officer Bertram James escaped that September, slipping under the wire and crawling through an abandoned drain, walking all the way to the Baltic coast. They almost made it, too, but the pair was captured near the coastal city of Rostock, just a few miles from the coast.

Mad Jack was sent off to Burma, following the defeat of Nazi Germany.  He was disappointed by the swift end to the war brought about by the American bombings at Hiroshima and Nagasaki, saying “If it wasn’t for those damn Yanks, we could have kept the war going another 10 years!”

As a Seaforth Highlander, Mad Jack was posted to the British Mandate in Palestine, in 1948. He was one of the first to the scene of the ambush and massacre of the Haddassah medical convoy that April, banging on a bus and offering evacuation in an armored personnel carrier. His offer was refused in the mistaken belief that Hadassah was mounting an organized rescue.

No such rescue ever arrived. Churchill and a team of 12 British Light Infantry were left to shoot it out with some 250 Arab insurgents, armed with everything from blunderbusses and old flintlocks, to Sten and Bren guns. Seventy-eight Jewish doctors, nurses, students, patients, faculty members and Haganah fighters were killed along with one British soldier. Dozens were burned beyond recognition and buried in mass graves. Churchill later coordinated the evacuation of some 700 Jewish patients and medical personnel from the Hadassah hospital at Hebrew University, in Jerusalem.

Churchill served as an instructor at the land-air warfare school in Australia, where he became passionately devoted to surfing.  Returning to England upon his retirement, he became the first to surf the 5′ tidal surge up the River Severn, on a board of his own design.

Mad Jack Churchill remained an eccentric, even in his later years.   He loved sailing radio-controlled model warships on the Thames, and little seemed to bring him more joy than to horrify fellow train passengers, opening the window and hurling his briefcase into the darkness.

No one ever suspected that he threw it into the garden of his own back yard.  It saved him the trouble of carrying it home from the station.

He scribbled a couplet once on a postcard, and mailed it to a friend.  The face of the card bore the regimental colors.

On the back, Mad Jack Churchill had written these words.

“No Prince or Lord has tomb so proud / As he whose flag becomes his shroud.”

He may have been talking about himself.