Over time, SCOTUS has proven itself to be as imperfect as any other institution. There have only been 112 justices in the history of the court. Some of them have been magnificent human beings, and some of them cranks.

Article III of the Constitution establishes the Supreme Court of the United States (SCOTUS), and “such inferior Courts as the Congress may from time to time ordain and establish”.

There’s no mention of the number of justices. The first Congress passed the Federal Judiciary Act on September 24, 1789, creating a six-justice Supreme Court.

Twelve years later, the presidency of John Adams was coming to an end. As a Federalist, Adams wanted nothing more than to stymie the incoming administration of Democratic-Republican Thomas Jefferson. Toward that end, Adams appointed the infamous “midnight judges” in the last hours of his administration: 16 Federalist Circuit Court judges and 42 Federalist Justices of the Peace.

The case advanced all the way to the Supreme Court, which ruled in Marbury v. Madison that the provision of the Judiciary Act enabling Marbury to bring his claim, was unconstitutional. Marbury had lost his case, but the principle of judicial review, the idea that the court could preside, Godlike, over laws passed by their co-equal branch of government, has been the law of the land, ever since.

In the early days of the Great Depression, Federal agricultural officials conceived the hare brained idea that artificially introducing scarcity would increase prices, and therefore wages, in the agricultural sector. Six million hogs were destroyed in 1933. Not harvested, just destroyed and thrown away. 470,000 cattle were shot in Nebraska alone. Vast quantities of milk were poured down sewers, all at a time of national depression when malnutrition was widespread. 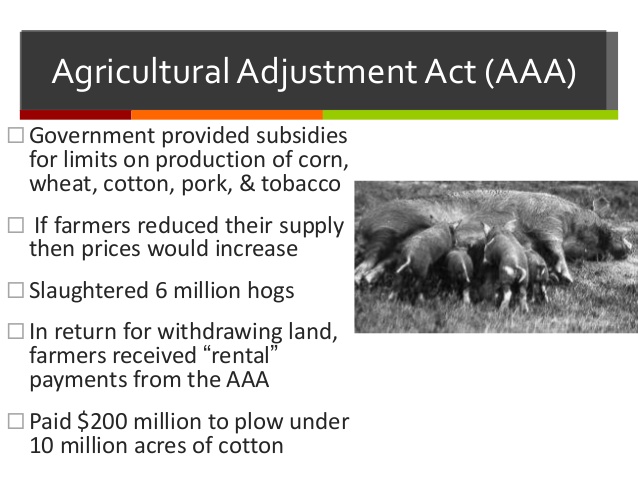 With the Agricultural Adjustment Act of 1938, Washington began to impose production quotas on the nation’s farmers. Ohio farmer Roscoe Filburne was ordered to grow 223 bushels of wheat in the 1941 season. Filburne grew 462.

Article 1, Section 8 of the Constitution permits Congress “To regulate Commerce with foreign Nations, and among the several States, and with the Indian Tribes”. On this flimsy basis, the Federal Government took Roscoe Filburne to court.

The farmer argued that the “surplus” stayed on his farm, feeding his family and his chickens. Lower Courts sided with Filburne. The government appealed all the way to the Supreme Court, arguing that, by withholding his surplus, Filburne was effecting interstate market conditions, thereby putting him under federal government jurisdiction.

Intimidated by the Roosevelt administration’s aggressive and illegal “court packing scheme“, SCOTUS ruled against the farmer. Ever since, what you don’t do can be held against you in a court of law. Get it? Neither do I.

Over time, SCOTUS has proven itself to be as imperfect as any other institution. There have only been 17 Chief Justices and 101 Associate Justices in the entire history of the court. Five Chiefs having previously sat as Associate Justices, there are only 113 in all.

Some of them have been magnificent human beings, and some of them cranks. There have been instances of diminished capacity ranging from confusion to outright insanity. One justice spent part of his term in a debtor’s prison.  Another killed a man. There have been open racists and anti-Semites.

There is no official portrait of the 1924 court because Justice James C. McReynolds wouldn’t stand next to Louis Brandeis, the court’s first Jewish Justice. One Justice was known to chase flight attendants around his quarters, while another spent his time in chambers watching soap operas.

There’s the former Klan lawyer turned Justice who took a single phrase, “separation of church and state”, from a private letter of Thomas Jefferson, and turned the constitutional freedom OF religion into an entirely made up freedom FROM religion.

The Supreme Court reinforced chattel slavery with the Dred Scott decision.  The Korematsu ruling gave us the forced incarceration of Americans of Japanese descent. Buck v. Bell gave American women the gift of forced sterilization, and Stenberg v. Carhartt enshrined the constitutional “right” to the hideous and detestable “procedure” known as partial birth abortion. From “Separate but Equal” to the “rights” of terrorists, SCOTUS’ rulings are final, inviolate, and sometimes imbecilic.

Chief Justice John Roberts, who once said “remember that it’s my job to call balls and strikes, and not to pitch or bat,” invented a whole new definition of taxation, enshrining the “Affordable Care Act” as the law of the land.

The framers gave us a Constitutional Republic with co-equal branches of government, with power diffused and limited by a comprehensive set of checks and balances.

They gave us two distinct means to amend that Constitution, should circumstances require it.

Traditionally, Congress proposes amendments, submitting them to the states for ratification. The problem is that many believe Congress itself to be part of the problem, and a broken institution is unlikely to fix itself.

Article V gives us a way to amend the constitution, if we would take it. Instead of Congress proposing amendments, an Article V convention of state legislatures would propose amendments, to take effect only if ratified by a super majority of states. We could start with an amendment permitting 2/3rds of the People’s representatives in Congress, to overturn a SCOTUS decision. Then we could term limit these people.

Unless, that is, you believe it’s fine for the Federal Government to prohibit a farmer from growing wheat for his own use, that one man in a black robe can force you to buy a product you don’t want and call it a “tax”, or you believe that “established by the state” means by the state or federal government, at the sole discretion of the man who says, “I’m from the Government. I’m here to help”.