It is altogether possible: that the ‘ol Chief put one over on Father Marquette on this day 344 years ago, and the Capital City of Iowa bears the name of a centuries-old jest. 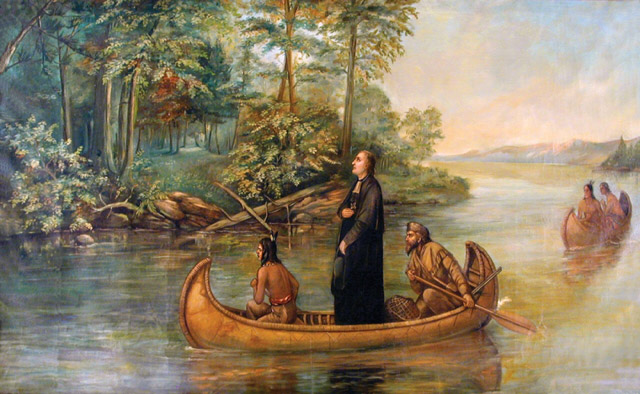 On May 17, 1673, Father Jacques Marquette set out with the 27-year old fur trader Louis Joliet to explore the upper reaches of the Mississippi River. Their voyage established the possibility of water travel from Lake Huron to the Gulf of Mexico, helping to initiate the first white settlements in the North American interior and bestowing French names on cities from La Crosse to New Orleans.

Relations with natives were mostly peaceful at this time, as several tribes jockeyed for advantage in the lucrative French fur trade.

On or about this day in 1673, Father Marquette asked the Chief of the Peoria about another tribe living down the river. Not wanting to effect his privileged position, the chief indicated that they didn’t amount to much, and weren’t worth bothering with. He called them “Moingoana”, a name which was later transliterated into French as “Des Moines”.

Marquette was expert in several native dialects by this time, but the chief may have been indulging in locker room humor, and the joke went over his head. The Miami-Illinois language is extinct today, but there is linguistic evidence suggesting that Moingoana derives from “mooyiinkweena”, translating politely, as, “those excrement-faces.”

There are alternate explanations of where the name comes from, but it is altogether possible:  the ‘ol Chief put one over on Father Marquette on this day 344 years ago, and the Capital City of Iowa bears the name of a centuries-old gag.