With no suspension, the bone jarring ride on one of these monsters was just the beginning of what crews were forced to endure.

Leonardo da Vinci drew sketches of a man-powered, wheeled vehicle encased in armor and bristling with cannon, as early as the 15th century. The design was limited, since no human crew could generate enough power to move it for long, and the use of animals in such confined spaces was fraught with problems..

Early armored cars were fine for moving personnel over smooth roads, but there was a need for a vehicle capable of navigating the broken terrain of no man’s land. In the run-up to WWI, several soon-to-be belligerents were conducting experiments with “land ships”, with varying degrees of success. 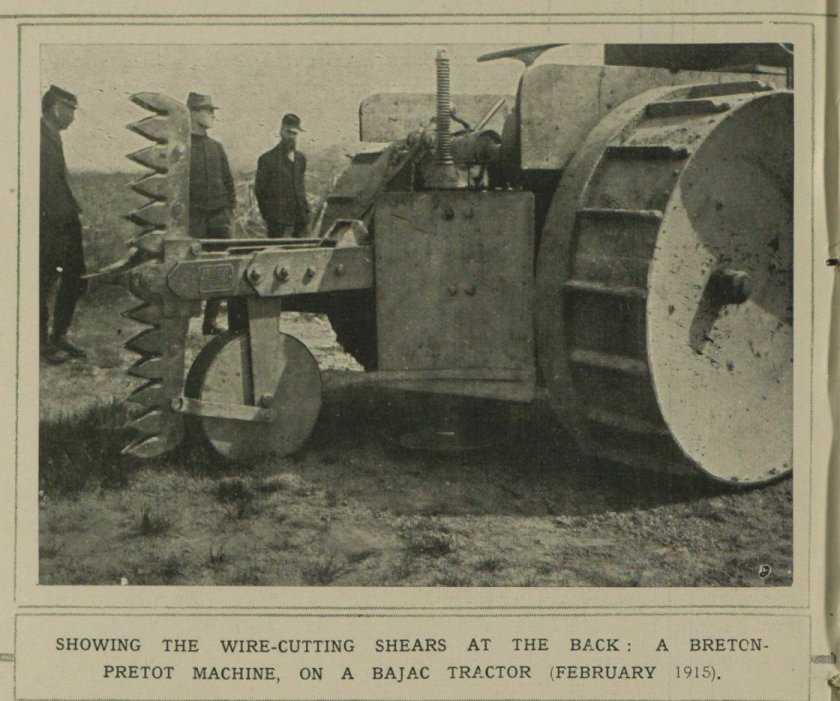 A French captain named Levavasseur proposed a crawler-tracked armored vehicle equipped with artillery as early as 1903, but the project was abandoned by the Artillery Technical Committee. Later French attempts included the Breton-Pretot machine, sporting huge 10’ x 13’ tracks and the Aubriot-Gabet “Fortress”.  Electrically powered, each of these things required its own power supply cable.  Needless to say, the idea was not widely imitated.

In 1911, Austrian engineering officer Günther Burstyn and Australian civil engineer Lancelot de Mole independently developed working models of such vehicles, but both designs were rejected by their governments.  They too would never be built.

The most unusual tank of WWI was the tricycle designed “Lebedenko” or “Tsar Tank”.  Developed by pre-Soviet Russia, the armament and crew quarters on this thing were 27′ from the ground, making them irresistible targets for enemy artillery.

The Russian Revolution would overtake the project before it got out of prototype, but post-revolutionary Russian propagandists would seize on the vehicle as “proof” that Russia had designed the first Tank.

The British had the greatest degree of success, after a failed experiment with the “Tritton Trench-Crosser” in May, 1915. This beast had 8′ tractor wheels carrying 15’ girders on a chain, which were lowered into a trench so that the back wheels could roll over it.  Girders would then drag behind, until the machine could back over them and rewind.

Finally, British work with the Holt Manufacturing Company of Stockton, California paid off with the most consistently successful track design. These “Caterpillar” treads had long been used on tractors. By 1916, the British army was using about 1,000 of Holt’s Caterpillar tractors on the Western Front.

These were the pet project of Winston Churchill, First Lord of the Admiralty, who described them as “Water Carriers” to mask their intended purpose.

No self-respecting Brit wanted to be associated with “WCs”, (“Water Closets”), so it was that these contraptions were destined to be known as “Water Tanks”, or just plain Tanks.  The name stuck.  The “No1 Lincoln Machine” gave way to “Little Willie” and finally the Mark I “Big Willie”, the familiar Rhomboid shaped caterpillar track design which first appeared on the Somme Front on this day in 1916.

49 Mark Is were committed in that first tank battle, of which 32 were mechanically sound enough to take part in the advance. German lines fell back in confusion before “der Wagen des Teufels“, “the Devil’s Wagon”, but they were too few to hold.

With no suspension, the bone jarring ride on one of these monsters was just the beginning of what crews were forced to endure.

The interior was so loud that communication was only possible via hand signal.  When bullets stuck the metal plates, splinters called “spall” would break away from the interior and fly about the cabin, requiring crew members to protect themselves with thick leather clothing and chain mail masks.

Interior temperatures rose to 122° Fahrenheit and more, making me wonder if these things weren’t as dangerous to their own crews as they were to the other side.

It was not until November 20 the following year at Cambrai, that the British Tank Corps had their first major success. Over 400 tanks penetrated 6 miles on a 7-mile front.  The infantry failed to exploit the tanks’ gains, and almost all territory was recaptured by the Germans. The British scored a far more significant victory on August 8, 1918, with 600 tanks at the Battle of Amiens. General Erich Ludendorff called it a “Black Day” for the German Army.

In all, the French fielded about 3,600 light Renault FT tanks in WWI, the British over 2,500 of their heavy Mark I-Vs.

The German General Staff was slow to adopt the tank, concentrating instead on anti-tank weapons. The majority of the 50+/- tanks fielded by Germany in WWI, were captured British vehicles.

The only German project to be produced and fielded in WWI was the A7V.  They only made 20 of these things in the armored, “Sturmpanzerwagen Oberschlesien“, “Upper Silesia Assault Armored Vehicle” version, and a few more in the unarmored “Überlandwagen”, “Over-land vehicle”, used for cargo transport.

It would be very different, in the next war.