For the media, the business model depends on renting an audience to a sponsor. The “controversy” would be squeezed for all it was worth, but Bocephus would have the last word.

Randall Hank Williams was born May 26, 1949 in Shreveport, Louisiana, the son of country singer/songwriter, Hiram King “Hank” Williams. Surprisingly for a guy who could neither read nor notate music and died at the age of 29, the elder Williams has been described as “one of the most significant and influential American singers and songwriters of the 20th century”.

A lifelong problem with drugs and alcohol ended the elder Williams’ life, way too early. All that police found in his Cadillac, were empty beer cans and handwritten, unfinished song lyrics.

The younger Williams was raised by his mother Audrey, after his father’s untimely death in 1953.  The apple didn’t fall far from the musical tree. Audrey encouraged the boy to copy his father’s dress and musical style. “Hank Williams Jr.” made his stage debut in Swainsboro Georgia, on March 22, 1958, at the age of 8. 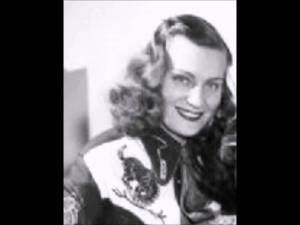 Some of the top musicians, singers and songwriters of the era came to visit the family: Johnny Cash, Fats Domino, Earl Scruggs, and Jerry Lee Lewis, to name a few. They all taught Bocephus a little of their musical instruments, and musical styles.

Bocephus was nearly killed in 1975, while climbing Ajax Peak in Montana. The snow collapsed beneath him, plunging him nearly 500 feet to the rocks below. There were multiple skull and facial fractures. Williams required several reconstructive surgeries, and had to learn to talk, and to sing, all over again. The signature look of beard, sunglasses and cowboy hat have all become part of his brand, but it all began to hide the scars from that mountain climbing accident.

Williams’ work in the 60s and 70s earned him a string of country music hits, but he wanted to be more than a “Hank Williams impersonator”.  A prodigously talented musician in his own right, Williams’ repertoire includes guitar, bass guitar, upright bass, steel guitar, banjo, dobro, piano, keyboards, harmonica, fiddle, and drums.

The country music establishment was slow to accept the new sound, but Hank Williams Jr. would not be denied. Sometimes recording and releasing two albums a year, Williams released 21 albums between 1979 and 1990, all certified “gold” by the Recording Industry Association of America. There were 44 Top Ten singles on the Billboard Country charts, including 10 No. 1 singles over the course of his career. In 1982, Bocephus had nine albums on the Billboard Top Country Albums chart, simultaneously. 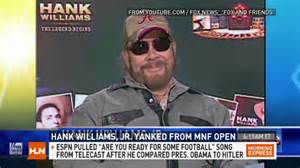 From 1989 to 2011, a version of Bocephus’ song “All My Rowdy Friends Are Coming Over Tonight” opened Monday Night Football broadcasts. In an October 3, 2011 interview with Fox News’ “Fox & Friends”, Williams described a June golf game between President Barack Obama and Speaker John Boehner as “one of the biggest political mistakes ever”.  Asked to explain, Williams said, “Come on. That’d be like Hitler playing golf with Netanyahu … in the shape this country is in?”

Predictably, the media outrage machine came to life – this would not do.  ESPN pulled the song from that night’s football game, the first of the season. Williams described his analogy as “extreme – but it was to make a point…I was simply trying to explain how stupid it seemed to me – how ludicrous that pairing was. They’re polar opposites, and it made no sense. They don’t see eye-to-eye and never will.” No matter. ESPN announced three days later that, after 22 years, Williams and his song were being pulled from all future broadcasts. ABC and the National Football League, were quick to follow suit. 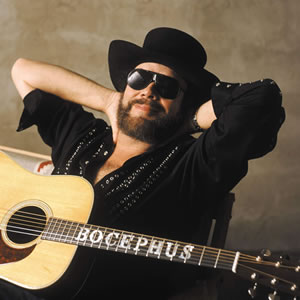 For the media, the business model depends on renting an audience to a sponsor.  The “controversy” would be squeezed for all it was worth, but Bocephus would have the last word.  He responded with a song, criticizing President Obama, ESPN and Fox & Friends, calling it “Keep the Change”.  As I write this, the song has had over 988,000 views on You Tube. Williams released the track on iTunes and via free download at his website, where it was downloaded over 180,000 times in just two days.

In the words of the song, Bocephus and all his rowdy friends were “outta there”.  A demonstration that, in an age of suffocating and humorless political correctness, even then, “A Country Boy will Survive”.