A talented artist, Bill Mauldin’s medium was the cartoon.  Through them, he told the story of the common soldier, usually at a rate of six per week. 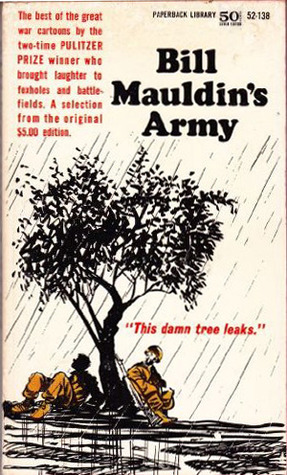 Born on October 29, 1921 in New Mexico and brought up in Arizona, William Henry “Bill” Mauldin was part of what Tom Brokaw called, the “Greatest Generation”.

Mauldin enlisted in the 45th Infantry Division when the United States entered WWII.  He was a talented artist, trained at the Chicago Academy of Fine Arts, and volunteered to work for the unit’s newspaper, as a cartoonist.

As a sergeant of the 45th Division’s press corps and later for Stars & Stripes, Mauldin was part of the invasion of Sicily and the later Italian campaign.  He was given his own jeep and allowed to go wherever he pleased, which was usually out in front.  His medium was the cartoon.  He told the story of the common soldier, usually at the rate of six per week. 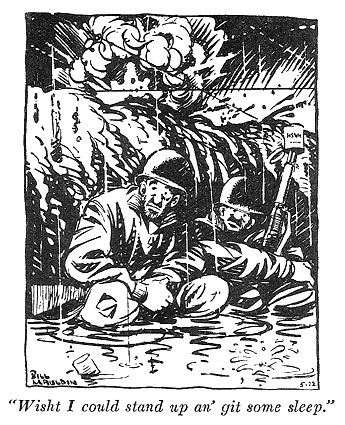 Mauldin developed two cartoon infantrymen, calling them “Willie and Joe”.  He told the story of the war through their eyes.  He became extremely popular within the enlisted ranks, while his humor tended to poke fun at the “spit & polish” of the officer corps.  He even lampooned General George Patton one time, for insisting that his men to be clean shaven all the time.  Even in combat.

Patton summoned the cartoonist to his office, threatening to “throw his ass in jail” for “spreading dissent”, until Dwight Eisenhower told Patton to leave him alone.  According to the Supreme Allied Commander, Mauldin’s cartoons gave the soldiers an outlet for their frustrations.

Mauldin later told an interviewer, “I always admired Patton. Oh, sure, the stupid bastard was crazy. He was insane. He thought he was living in the Dark Ages. Soldiers were peasants to him. I didn’t like that attitude, but I certainly respected his theories and the techniques he used to get his men out of their foxholes”.

His was no rear echelon assignment.  Mauldin’s fellow soldier-cartoonist, Gregor Duncan, was killed in Anzio in May 1944.  Mauldin himself was wounded in a German mortar attack near Monte Cassino.  By the end of the war, he had received the Army’s Legion of Merit for his drawings.

Mauldin tried to revive Willy & Joe after the war, but found they didn’t assimilate well into civilian life.

“Peanuts” cartoonist Charles M. Schulz was himself a veteran of World War II. Schulz paid tribute to Rosie the Riveter and Ernie Pyle in his strip, but more than any other, he paid tribute to Willy & Joe. Snoopy visited with Willie & Joe no fewer than 17 times over the years.  Always on Veterans Day.

Bill Mauldin passed away on January 22, 2003, from a bathtub scalding exacerbated by complications of Alzheimer’s disease.

Bill Mauldin drew Willie & Joe for last time in 1998, for inclusion in Schulz’ Veteran’s Day Peanuts strip.  Schulz had long described Mauldin as his hero. He signed that final strip Schulz, as always, and added “and my Hero“.  Bill Mauldin’s signature, appears underneath. 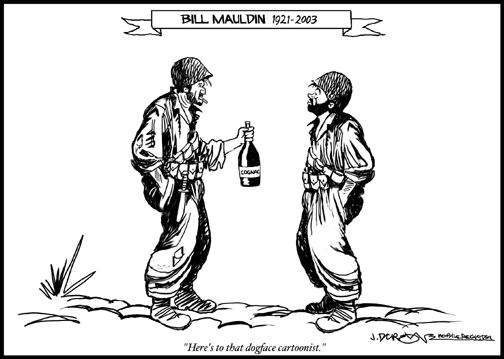