The 1917 incident accounted for the largest single-incident loss of life in the history of United States law enforcement, a record which would stand until September 11, 2001. 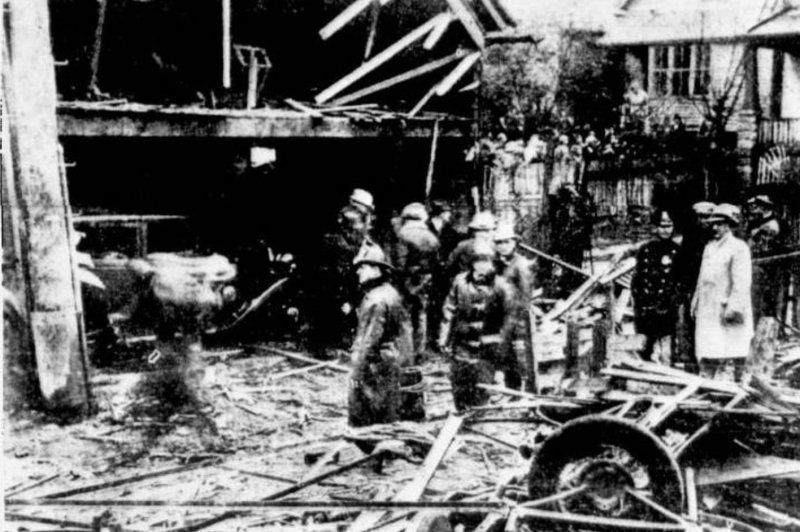 On the morning of November 24, 1917, 10-year-old Josie Spicciatti found a package in a narrow passage next to St. Anne’s Italian Evangelical Church in Milwaukee. She was the daughter of the cleaning lady, and apparently recognized it as a bomb.  She brought it into the church anyway, and went to work.

Only that afternoon did she go looking for Maude Richter, a social worker at the church. At about 4:00, Maude dragged the 20-pound bomb into the church basement, banging it on the steps all the way down. She later told a reporter, “I saw the vial, which contained a brown fluid” (it was sulfuric acid), “and took it out. In the hole, where it had been placed, was a yellow substance like powder.”

She then decided that things should be left as they’d been found, so she carefully reassembled the device and called Sam Mazzone, the janitor, to take the bomb to the police station. Mazzone explained to Desk Sergeant Henry Deckert that the bomb may be linked to a near riot which had erupted several months earlier, killing two parishioners and wounding 5, including two police officers.

Policemen on duty were told there was a bomb in the station, but it seems that few took it seriously. Captain of Detectives John Sullivan remarked “It looked like a big dinner pail and innocent enough.”

Sergeant Deckert took the bomb into the office of Lieutenant Robert Flood, saying, “Look at the new kind of bomb I’ve got.” “Get that thing out of here”, said Flood. “Don’t fool around with anything like that!” Deckert then brought the bomb into the squad assembly room, where a group of detectives gathered to examine the device.

That’s when the thing went off.

Eight officers were killed in a fraction of a second as was Catherine Walker, who had come to the station to file a complaint against her boyfriend. Operator Edward Spindler was working the switchboard on the second floor. Shrapnel blasted through the floor, entering his body at the waist and exiting through his head, killing him instantly.

One detective’s wedding band was blown from his finger. A shoe hung from the ceiling. A hat hung on a shard of glass.  One detective’s watch was found, face up on a windowsill, the hands had stopped at 7:33PM. Sergeant Deckert’s body was never found. He was identified only by the stripe of his uniform trousers leg.

A group led by Italian Anarcho-Communist Luigi Galleani was suspected of placing the bomb, though no one was ever charged with the crime.

Many years later, interviews with surviving members of the anarchist organization indicated that Mario Buda, chief bomb maker for the Galleanists, may have constructed the Milwaukee device. The bomb had been intended for the small Italian church and its outspoken and patriotic pastor, Reverend August Giuliani.

The Milwaukee police station bombing accounted for the largest single-incident loss of life in the history of United States law enforcement, a record which would stand until September 11, 2001.