Never in the history of the whale fishery had a whale been known to attack a ship unprovoked. What was happening now was unmistakable. 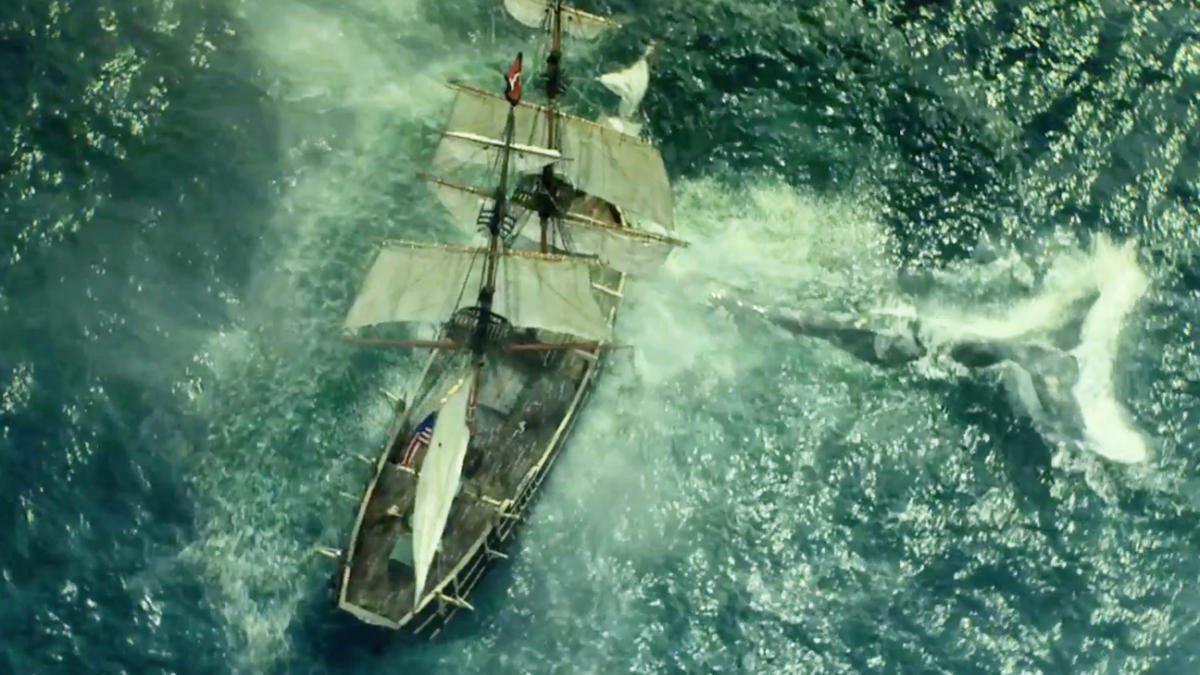 The whaleship Essex set sail from Nantucket in August 1819, the month Herman Melville was born.  The 21-man crew expected to spend 2-3 years hunting sperm whales, filling the ship’s hold with oil before returning to split the profits of the voyage.

Essex sailed down the coast of South America, rounding the Horn and entering the Pacific Ocean.  There they heard that the whaling grounds near Chile and Peru were exhausted so they sailed for the “offshore grounds”, almost 2,000 miles from the nearest land.

That’s exactly where they were there on November 20, 1820, with two of Essex’ three boats out hunting whales.  The lookout spotted a huge bull sperm whale, behaving oddly, lying motionless on the surface with his head facing the ship. He was a large animal, much larger than most, estimated at 85 feet long and 80 tons.  In moments, he began to move. Picking up speed it soon became clear, this beast was charging the ship.

The powerful tail churned the water to froth as the great beast closed the distance, striking the port side so hard, it shook the ship.

Never in the history of the whale fishery had a whale been known to attack a ship unprovoked. What was happening now was unmistakable.

The huge animal seemed dazed at first by the impact, floating to the surface and resting near the ship’s side.  He then turned and swam away for several hundred yards before turning to resume the attack.  He came in at the great speed of 24 knots according to First Mate Owen Chase, ramming the port bow and driving the stern into the water.  Oak planking cracked and splintered as the whale worked his tail up and down, driving the 238-ton vessel backward.  Essex had already started to go down when the whale broke off his attack, diving below the surface, never to return.

Captain George Pollard’s boat was the first to make it back. Staring in disbelief, Pollard asked “My God, Mr. Chase, what is the matter?” The first mate replied:   “We have been stove by a whale”.

The whale ship Essex was dying. No force on earth could save her. The crew divided into groups of seven and boarded the three boats.  It wasn’t long before Essex sank out of sight. 21 men now alone, stranded in 28-foot open boats, about as far from land as it was mathematically possible to be.

The whalers believed that cannibals inhabited the Marquesa islands, 1,200 miles to the west. So they headed south, parallel to the coast of South America.  Before the ordeal was over, they themselves were destined to become the cannibals.

With good winds, they might reach the coast of Chile in 56 days.  There were enough rations to last 60 provided they were distributed at starvation levels, but much of it turned out to be ruined, by salt water.  There was a brief reprieve in December, when the three small boats landed on a small island in the Pitcairn chain.  There they were able to get their fill of birds, eggs, crabs, and peppergrass. Within a week the island was stripped clean.  The men decided to move on save for three who refused to get back in the boats and were left behind.

None of them knew it but this was Henderson Island, only 104 miles from Pitcairn Island where survivors from the 1789 Mutiny on HMS Bounty had managed to survive for the past 36 years.

After two months at sea, the boats had long separated from one another.  Starving men were beginning to die and the survivors came to an unthinkable conclusion.  They would have to eat their own dead.

When those were gone, the survivors drew lots to see who would die, that the others might live.  Captain Pollard’s 17-year-old cousin Owen Coffin, whom he had sworn to protect, drew the black spot.   Pollard protested, offering to take his place, but the boy declined. “No”, he said, “I like my lot as well as any other.”  Again, lots were drawn to see who would be Coffin’s executioner.  Owen’s friend, Charles Ramsdell, drew the black spot.

On February 18, the British whaleship Indian spotted a boat containing Owen Chase, Benjamin Lawrence and Thomas Nickerson.  It was 90 days sink Essex sank out of sight.  Five days later, the Nantucket whaleship Dauphin pulled alongside another boat, to find Captain Pollard and Charles Ramsdell inside.  The pair was so far gone they didn’t even notice at first, gnawing on the bones of their comrades.

The three left on Henderson Island were later rescued.  The third whaleboat was found beached on a Pacific island several years later, with four skeletons on board.

The Essex was the first ship recorded to have been sunk by a whale, though she would not be the last.  The Pusie Hall was attacked in 1835. The Lydia and the Two Generals were both attacked by whales a year later. The Pocahontas and the Ann Alexander were sunk by whales in 1850 and 1851.

31 years after the Essex’ sinking a sailor turned novelist published his sixth work, beginning with these words: “Call me Ishmael”.