For NHL hockey, the face mask became standard equipment on this day, in 1959. I’m not sure if goalies are any prettier these days, but they have a lot more teeth. 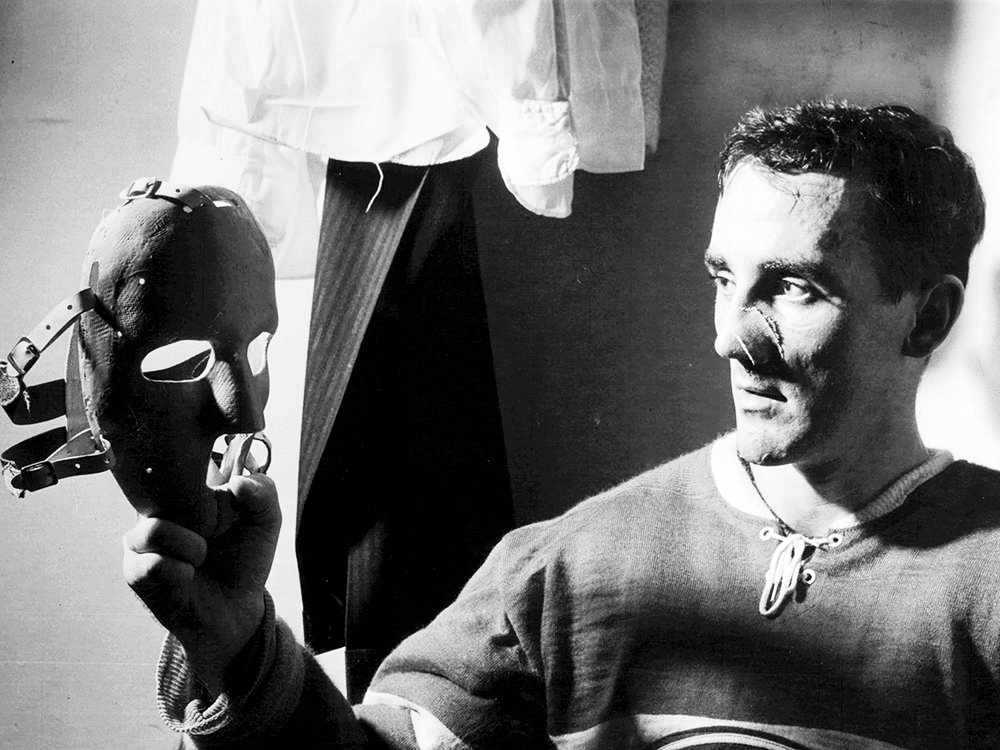 In the Netherlands, modern ice hockey began sometime in the 16th century.  North Americans have played the sport since 1855.   For all that time, flying hockey pucks have collided with the faces of goaltenders.  The results have not have been pretty.

The name of Montreal Canadien goal tender Jacques Plante is engraved five times on Lord Stanley’s cup, once for each of five consecutive championships between 1956, and ‘60.

For a lifelong Bruins fan, that isn’t easy to say.

On this day in 1959, Jacques Plante decided he’d had enough. It was three minutes into a game with the New York Rangers when he took a puck to the nose on a shot fired by Andy Bathgate. The puck broke his nose, opening a wound requiring seven stitches to close.  When Plante returned to the ice, he was wearing a fiberglass mask.

Coach Toe Blake was furious. He had allowed the mask during practice, but this was regulation.  Nobody wore a mask.  Coaches believed they cut the goaltender’s field of vision, and, besides.  These were supposed to be the “fearless” guys, who jumped in front of the puck.

Easy for him to say.  It wasn’t his face.  Plante was adamant, and Blake wasn’t about to bench the best goalie in the NHL. There would be one more game when Plante played without the mask, the only game the Canadiens lost in that series, and that was the end of it.

For Jacques Plante, the mask had now become standard equipment.

In 1966, Life Magazine published an image of Toronto Maple Leafs goalie Terry Sawchuk, “a face only a hockey puck could love“. “Re-created here, by a professional make-up artist and a doctor” read the accompanying article, “are some of the more than 400 stitches he had earned during 16 years in the National Hockey League. Terry Sawchuk’s face was bashed over and over, but not all at one time. His wounds healed. The scars weren’t easily seen – except for a few of them. The re-creation of his injuries was done to help show the extent of his injuries over a span of years”.

During a 1968-’69 season playoff game against the Boston Bruins, a puck fired by Phil Esposito hit Plante in the forehead, knocking him out, cold.  He later said that the mask had saved his life.  He’s probably right.

Gerry Cheevers, who played for the 1970-’72 Bruins, famously had his mask marked up with stitches. That started when a puck hit him in the face during practice. When Bruins coach Harry Sinden followed Cheevers to the dressing room, he found the goalie enjoying a beer and smoking a cigarette. Sinden sent Cheevers back out on the ice and John Forestall, the team trainer, painted stitches on his mask. Every time Cheevers was hit after that, he would have new stitches painted on. The mask became one of the most recognizable symbols of the era, and now hangs on the wall of his grandson’s bedroom.

It was Plante who introduced the face mask as everyday equipment, now a mandatory fixture for all goaltenders.

I’m not sure if NHL goalies are any prettier these days, but I bet they have a lot more teeth.