And finally it came, the eleventh hour of the eleventh day of the eleventh month. The church bells rang out in celebration that day in 1918, even as his mother and father, opened the dread telegram. “Deeply regret to inform you, that…” 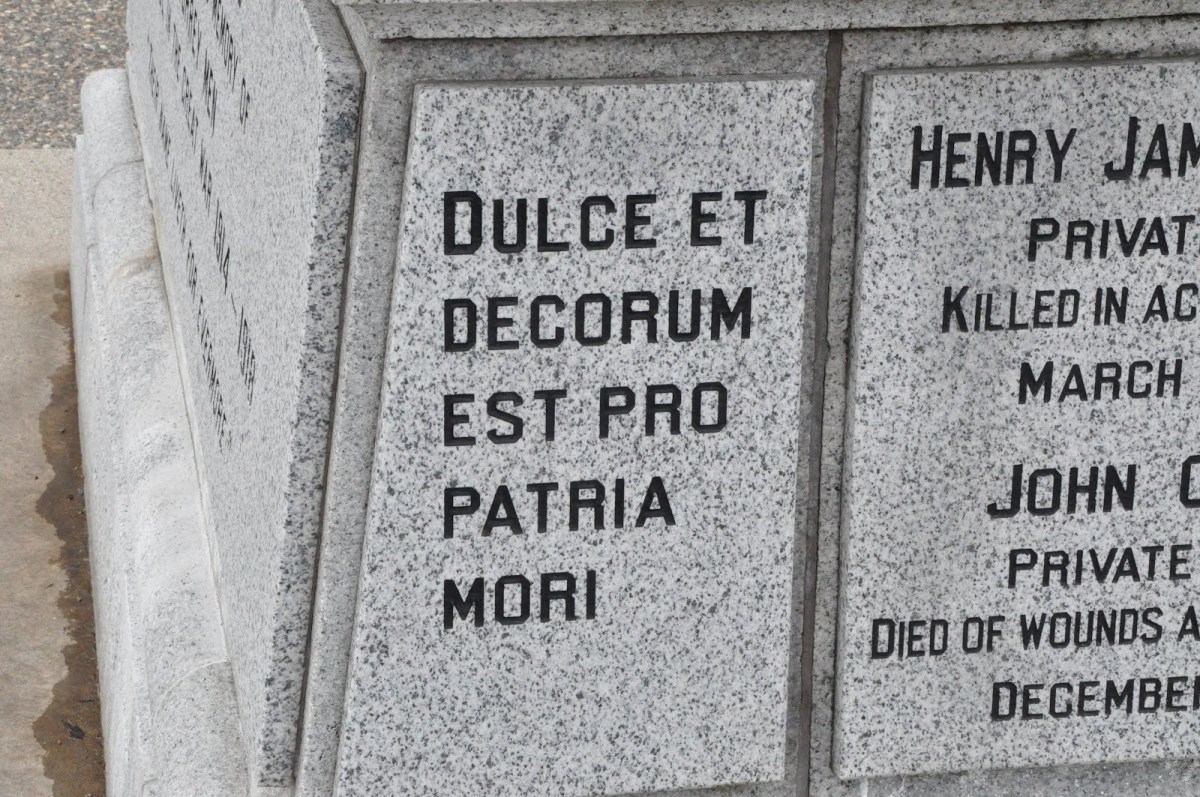 The words come down to us some 2,000 years from the Roman poet, Horace. Dulcē et decōrum est prō patriā mōrī. It is sweet and proper to die for one’s country.

When the “Great War” broke out in 1914, Wilfred Owen was working as a private English tutor, in Bordeaux. At first in no hurry to sign up, Owen considered joining the French Army before returning home, to England.

In October 1915, he enlisted in the Artists Rifles Training Corps. Originally formed in 1859, the Artists Rifles was a British special forces regiment, raised in London and comprised of painters, musicians, actors and architects, symbolized by the heads of the Roman gods Mars and Minerva.

It must have felt natural.  Wilfred Owen was a poet, a talent first discovered about ten years earlier, at the age of ten or eleven.

Owen was commissioned Second Lieutenant after six-months training, and posted with the Manchester Regiment of line infantry.  An application to the Royal Flying Corps was rejected in 1916 and he was shipped to France, joining the 2nd Manchester regiment near Beaumont Hamel, on the river Somme.

He was contemptuous of his men at first, considering them all to be louts and barbarians.  He wrote home to his mother Susan in 1917, describing his company as “expressionless lumps”.  The war was soon to beat that out of him.

Owen was close with his mother, his letters home telling a tale of mud and frostbite, of endless hours under heavy bombardment, sheltered only by a muddy, flooded dugout, of the fall through shell-shattered earth into the cellar below, that earned him a trip to the hospital.  It would not be his last.

He was caught in an explosion during the bitter battle of St. Quentin, blown off his feet and into a hole, there to spend days fading in and out of consciousness amidst the mangled remains of a fellow officer.

Following this experience, soldiers reported Owen behaving strangely. He was diagnosed as suffering from neurasthenia or shell shock, what we now understand to be Post-Traumatic Stress Disorder, and sent to Craiglockhart War Hospital in Edinburgh, for treatment.

There, Dr. Arthur Brock encouraged Owen to work on his poetry, to overcome shell shock.  There he met another patient, the war poet Siegfried Sassoon. The chance meeting would elevate Wilfred Owen to one of the great war poets, of his generation.

Owen’s work was different before this time, vaguely self important but never self pitying. Never the pacifist – he held those people in contempt – Owen’s nightmares now brought forth a savage honesty and bottomless compassion for the burdens of the ordinary soldier.  Tales of trench life:  of gas, of lice, of mud and death, of hell and returning to earth, steeped in contempt for the patriotic sentimentality of non-combatants and the slurs of cowardice, so lightly dispensed by the women of the “White Feather” movement.

Anthem for Doomed Youth gives a sense of this period:

What passing-bells for these who die as cattle?
— Only the monstrous anger of the guns.
Only the stuttering rifles’ rapid rattle
Can patter out their hasty orisons.

Owen continued to write through his convalescence, his fame as author and poet growing with the late months of 1917 and into March of the following year. Supporters requested non-combat postings on his behalf, but such requests were turned down. It’s unlikely he would have accepted them, anyway. His letters reveal a deep sense of obligation, an intention to return to the front to be part of that life and to tell the story of the common man, thrust by his government into uncommon conditions.

Wilfred Owen well understood his special talent.  He wanted to return to front line combat, made all the more urgent when Sassoon was once again wounded, and removed from the front.

Back in France, Owen captured a German machine gun position on September 29, for which he was awarded the Military Cross.  Posthumously.

He wrote home to his mother on October 31, from the shelter of a cellar in a small wood called Bois l’Évêque, near the Sambre–Oise Canal.  It was the last such note she would ever receive.  “Of this I am certain” he wrote, ” you could not be surrounded by a band of friends half so fine as surround me here.”

The 44-mile Sambre-Oise Canal flows through the Meuse river basin, a network of 38 locks directing the water’s flow and connecting the Netherlands and Belgium with the central waterways of France. Forces of the 2nd Battalion Royal Sussex forced the canal on November 4 in coordination with elements of the 2nd Manchester Regiment and the Lancashire Fusiliers. British forces were to cross surrounding fields lined with high hedges, then to traverse the canal by portable foot bridges or climbing across lock gates.

The battle of the Sambre–Oise Canal was one of the last Allied victories of the Great War, but not without cost. Lock houses on the opposite side formed strong points for German defensive fire, from small arms and machine guns.

Wilfred Owen was leading a raiding party when the German machine gun barked and chattered to life, the bullets tearing into his body. The armistice ending the ‘War to End All Wars” was to come a week later, nearly to the hour.

The eleventh hour of the eleventh day of the eleventh month. The church bells of Shrewsbury rang out in celebration that day in 1918, even as Tom and Susan Owen, the 25-year-old’s mother and father, opened the dread telegram.

“Deeply regret to inform you, that…”

Bent double, like old beggars under sacks,
Knock-kneed, coughing like hags, we cursed through sludge,
Till on the haunting flares we turned our backs,
And towards our distant rest began to trudge.
Men marched asleep. Many had lost their boots,
But limped on, blood-shod. All went lame; all blind;
Drunk with fatigue; deaf even to the hoots
Of gas-shells dropping softly behind.

Gas! GAS! Quick, boys!—An ecstasy of fumbling
Fitting the clumsy helmets just in time,
But someone still was yelling out and stumbling
And flound’ring like a man in fire or lime.—
Dim through the misty panes and thick green light,
As under a green sea, I saw him drowning.

In all my dreams before my helpless sight,
He plunges at me, guttering, choking, drowning.

If in some smothering dreams, you too could pace
Behind the wagon that we flung him in,
And watch the white eyes writhing in his face,
His hanging face, like a devil’s sick of sin;
If you could hear, at every jolt, the blood
Come gargling from the froth-corrupted lungs,
Obscene as cancer, bitter as the cud
Of vile, incurable sores on innocent tongues,—
My friend, you would not tell with such high zest
To children ardent for some desperate glory,
The old Lie: Dulce et decorum est
Pro patria mori.