During the WW2 era, it wasn’t unusual for boys to lie about their age in order to enlist. 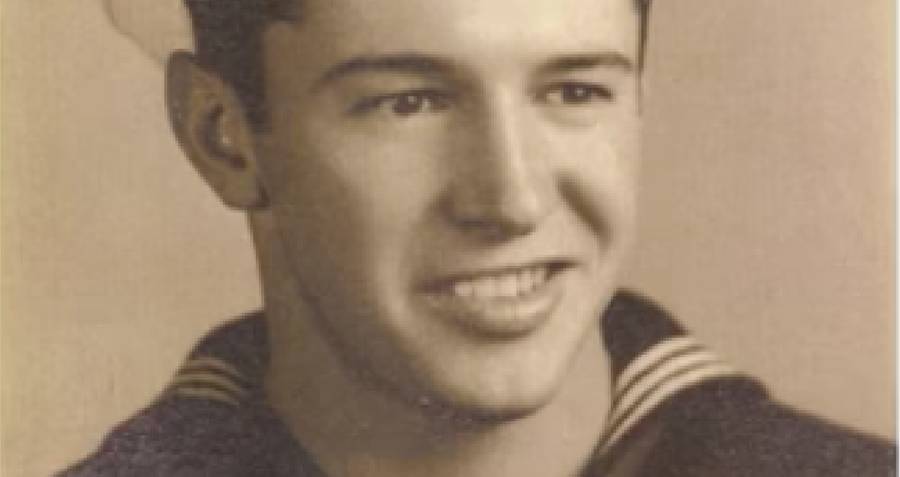 Calvin Leon Graham was a child of the Great Depression, a poor East Texas farm kid born April 3, 1930, the youngest of seven.

By the time  Japanese military planners were outlining the surprise attack on the American anchorage at Pearl Harbor, the boy’s mother had become widowed and remarried. The man was by all accounts mean and abusive of his step-children. By sixth grade, Calvin had moved out with an older brother, living in a cheap rooming house and supporting himself selling newspapers and delivering telegrams on weekends and after school.

The boys’ mother continued to visit, sometimes only to sign their report cards, at the end of a semester. 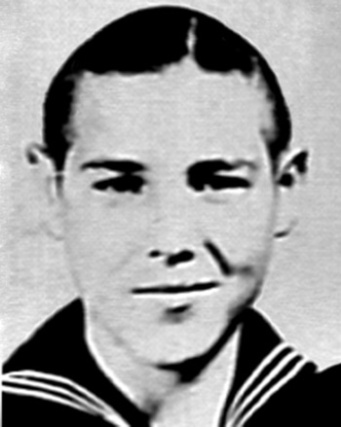 Being around newspapers allowed the boy to keep up on events overseas, “I didn’t like Hitler to start with“, he once told a reporter. By age eleven, some of Graham’s cousins had been killed in the war, and the boy wanted to fight.

He began to shave, believing that his facial hair would come in faster and thicker that way (it didn’t), and practiced “talking deep”.

“In those days, you could join up at 16 with your parents’ consent” he later said, “but they preferred 17“. Graham forged his mother’s signature and stole a notary stamp, telling his mother he was going to see some relatives for a while.

On this day in 1942, Calvin Leon Graham showed up at a Houston recruiting office, dressed in his older brother’s clothes. All five-foot-two inches of him, and 125 pounds. He was twelve years old.

Graham was less concerned with the recruiting officer spotting that forged signature, than he was with the dentist. With good reason, this was a man with a finely tuned BS detector. “When the dentist kept saying I was 12, I said I was 17“. At last, the boy played his trump card, informing the dentist that the last two boys were fourteen and fifteen, and that the dentist had already let them through. “Finally,” Graham recalled, “he said he didn’t have time to mess with me and he let me go“.

During the WW2 era, it wasn’t unusual for boys to lie about their age in order to enlist. Ray Jackson joined the United States Marine Corps at 16, and founded a group for underage military veterans in 1991, “to assure all underage veterans that there will be no retribution from the government because of their fraudulent enlistment“. Smithsonian.com reports the organization lists over 1,200 active members.  Twenty-six of them, are women.

The boy was sent to boot camp in San Diego and on to Pearl Harbor six weeks later, and assigned to the newly christened battleship USS South Dakota.

When South Dakota steamed out of Philadelphia and cleared the Panama Canal, “No ship more eager to fight ever entered the Pacific.” Under the command of Captain Thomas Leigh Gatch, the battleship was brimming with “green boys” –  cocky, inexperienced new recruits, full of fight and eager for payback against the Japanese empire.

During the October battle for the Santa Cruz islands, South Dakota was credited with downing 26 Japanese aircraft, while taking a 500-pound bomb to the #1 gun turret.

Standing on the bridge, Captain Gatch watched as that 500-pounder came in, striking the main gun turret.  The impact threw the skipper off his feet and severed his jugular vein, and permanently injuring ligaments in the man’s arms. Quick-thinking quartermasters saved the unconscious captain’s life, and several later asked him, why he hadn’t ducked. “I consider it beneath the dignity of a captain of an American battleship“, he said, “to flop for a Japanese bomb“.

Over the November 14 night battle for Guadalcanal, USS South Dakota came under attack from three Japanese warships, receiving no fewer than forty-seven hits. With her radio communications out and radar demolished, the battleship lost track of the complicated tactical situation. Calvin Graham was manning his 40mm gun when shrapnel tore through his mouth and jaw, tearing out his front teeth. Another hit burned the boy severely and threw him off his feet, and down three stories of superstructure.

Despite his injuries, Graham did what he could to take care of his fellow sailors:

“I took belts off the dead and made tourniquets for the living and gave them cigarettes and encouraged them all night. It was a long night. It aged me… I didn’t do any complaining because half the ship was dead”.

USS South Dakota was so beat up during the confused night action, that the Japanese believed her to have been sunk.  Eventually, she would limp back to new York for repairs and, not wanting the enemy to know too much, she was stripped of her insignia.

USS South Dakota would complete her WW2 service as “Battleship X”, but that must be a story for another day. 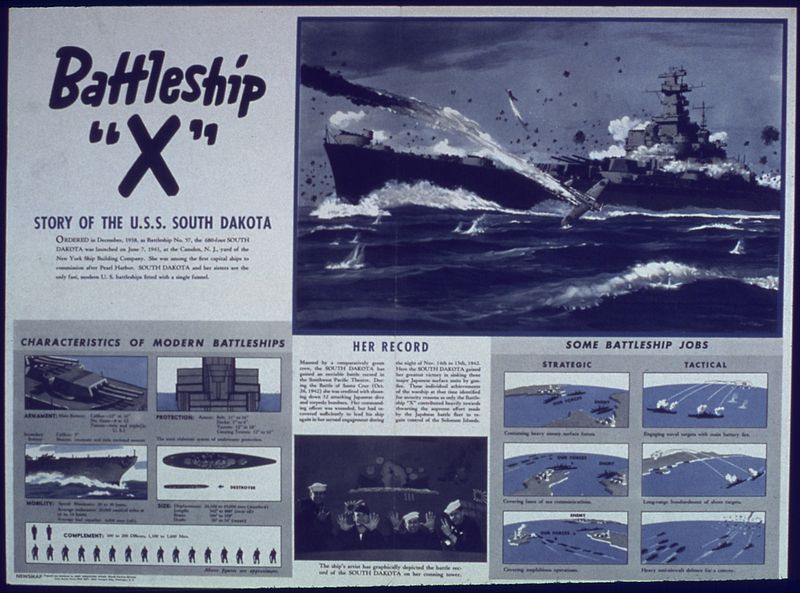 Graham received a Bronze Star and a Purple Heart for his actions, but such distinctions were short-lived. His mother learned what the boy had been up to and informed the Navy of his real age. Graham was thrown in the brig for lying about his age and held for nearly three months, released only when his sister threatened to go to the media. He was stripped of his medals and dishonorably discharged from the military. At thirteen, Calvin Graham was a “Baby Vet”, no longer fitting in at school and rejected by the nation he had served.

If only our politicians, could expect such stern justice.

Graham soon chose the life of an adult, marrying and fathering a child at the age of fourteen, while working as a welder.  He was divorced by seventeen and enlisted in the Marine Corps. A fall from a pier broke his back three years later, ended his military career for good and leaving him selling magazine subscriptions for a living. 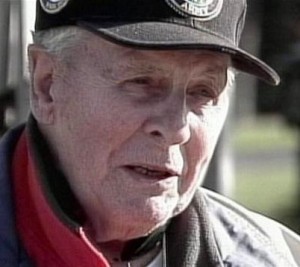 For the rest of his life, Calvin Graham fought for a clean service record, and for restoration of medical benefits. President Jimmy Carter personally approved an honorable discharge in 1978, and all Graham’s medals were reinstated, save for his Purple Heart. He was awarded $337 in back pay but denied medical benefits, save for the disability status conferred by the loss of one of his teeth, back in WW2.

Graham came to public notice in 1988 with the made-for-TV movie Too Young the Hero starring Rick Schroder, prompting government review of his case.  Graham earned $50,000 for rights to his story, but half went to two agents and another 20% to the writer of a book, which was never published.  Graham and his wife received only $15,000, before taxes.

President Ronald Reagan signed legislation granting Graham full disability benefits and increasing back pay to $4,917, and allowing $18,000 for medical expenses incurred during his military service. Lamentably, many old medical bills were permanently lost, and some of his doctors, had died. Graham received only $2,100 reimbursement for past medical expenses.

Calvin Leon Graham died at his home in Fort Worth Texas in 1992, a victim of heart failure.  He was buried at Laurel Land Memorial Park in Fort Worth, Texas.  Graham’s Purple Heart was reinstated two years later and awarded to his widow by Secretary of the Navy John Dalton. Fifty-two years after the events which led to its award. 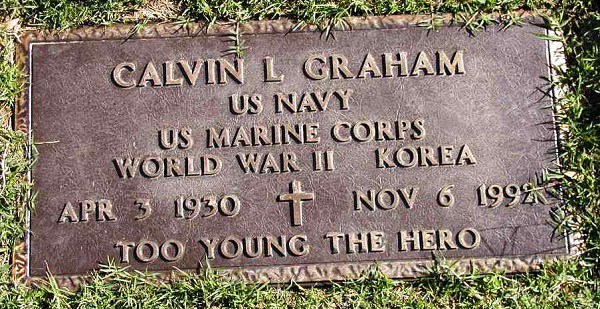