After eight days of trial, the jury took only nine minutes to deliberate, finding Scopes guilty on July 21.

The American Civil Liberties Union (ACLU) immediately announced its intention to sue, offering to defend anyone accused of violating the act. Local businessman George Rappleyea arranged a meeting with the county superintendent of schools and local attorney Sue Kerr Hicks, a man who may have been the inspiration for Shel Silverstein’s “A Boy Named Sue,” which everyone remembers from the Johnny Cash song, of 1969.

The three met at Robinson’s Drug Store, and agreed that their little town of Dayton could use the publicity. The trio summoned 24-year-old High School football coach and part time substitute teacher John Scopes, asking him to plead guilty to teaching the theory of evolution. Scopes replied that he could not recall if he had done so, but would be more than happy to be the defendant if anyone could prove that he had.

Scopes was charged on May 5, barely two months after the law’s enactment, with teaching evolution from “Civic Biology”, a textbook describing the theory of evolution, race and eugenics. The prosecution brought in William Jennings Bryan to try the case and the defense hired Clarence Darrow.  Two of the heaviest of jurisprudential heavy hitters of the day, were now lined up in the “Trial of the Century”. 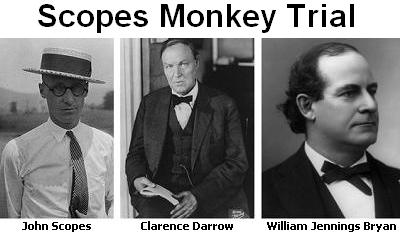 Bryan complained that evolution taught children, that humans were no more than one among 35,000 mammals. He rejected the idea that humans were descended from apes. “Not even from American monkeys, but from old world monkeys”. The ACLU wanted to oppose the Butler Act on grounds that it violated the teacher’s individual rights and academic freedom, but it was Darrow who shaped the case, taking the position that the theistic and the evolutionary views were not mutually exclusive. 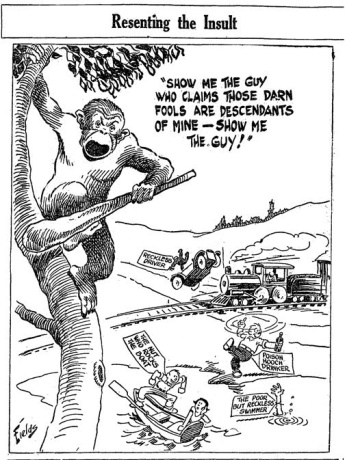 What had begun as a publicity stunt soon became an overwhelming media event. 200 newspaper reporters from all over the country arrived in Dayton, along with two come all the way from London. Twenty-two telegraphers sent out 165,000 words a day over thousands of miles of telegraph wires, hung specifically for the purpose.

H.L. Mencken, writing for the Baltimore Sun, mocked the prosecution and the jury as “unanimously hot for Genesis.” Mencken labeled the town’s inhabitants “yokels” and “morons”. Bryan was a “buffoon” and his speeches “theologic bilge”. It was Mencken who dubbed the proceedings, “Monkey Trial”. The defense, on the other hand, was “eloquent” and “magnificent”. Or so he claimed.

Not the least little bit of media bias, there.

After eight days of trial, the jury took only nine minutes to deliberate, finding Scopes guilty on July 21. The gym teacher was ordered to pay a $100 fine, equivalent to something like $1,300, today. Scopes’ conviction was overturned by the Tennessee Supreme Court, on the basis that state law required fines over $50 to be decided by a jury, and not by the judge presiding.

American creationists believe to this day, that media reports turned public opinion against the religious view. Evolution vs Creation debates may be reasonably expected to continue, for the foreseaable future. Ultimately, neither seems supportable, by anything more than the faith of its adherents.