The territory which would come to be occupied by the colony of Georgia was a subject for dispute between Great Britain and Spain, since long before the state became a colony.

Spain had taken Florida for its own, dating the claim back to explorer Ponce de Leon’s first mapping the territory in 1513 and claiming Georgia to be part of it. James Oglethorpe founded the 13th colony as a buffer colony for the British in 1733, serving as a protective zone against Spanish invasion, for her twelve sister colonies to the north.

The Convention of Pardo concluded in early 1739 attempted to settle issues relating to smuggling and to the slave trade, but Spain suspected “cheating” and continued to board foreign vessels at will. The War of Jenkins’ Ear broke out later that year, when Commander Juan de León Fandiño hacked 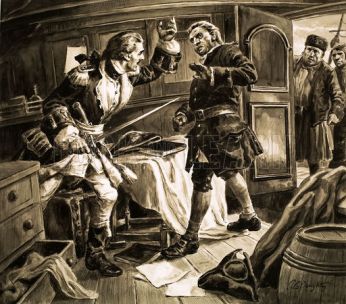 off the ear of Commander Robert Jenkins, informing the unfortunate ship’s master that he could   “Go, and tell your King that I will do the same”, to him.

Spain immediately began to draw up plans to invade the Georgia colony.

One day, St. Simons Island would be made notable for having provided the 2,000 southern Live Oak trees, forming the hull of the USS Constitution, “Old Ironsides”.  On July 5, 1742, that day was far in the future.  On this day, a Spanish invasion force of somewhere between 4,500 and 5,000 men landed on the island, in 36 ships.

A much smaller force of approximately 950 British Regulars, Colonial Militia and Indian Allies was under the command of James Oglethorpe, founder of the Georgia Colony. Oglethorpe withdrew his forces in in the face of the much larger invasion, and later attacked a Spanish reconnaissance in Force at a place called Gully Hole Creek. The Spanish were routed, with almost a third of their number either killed or captured. Falling back in the face of superior numbers of Spanish reinforcements, the British attacked the Spaniards a second time as they stacked arms and pulled out their pots and pans preparing for dinner. The “Battle of Bloody Marsh” was another victory for the British, and would prove to be decisive.

A few days later, Oglethorpe launched what can only be described a a psychological warfare operation.  A Spanish prisoner was released to the other side, with information that a massive British force was on the way.  Fearing that Montiano might learn the true size of his puny force, Oglethorpe spread drummers out until their sound seemed to come from all directions.