“Now I am become death, the destroyer of worlds”. – Bhagavad Gita

The words come down to us from the Bhagavad Gita, the Hindu epic Mohandas Gandhi would describe as his “spiritual dictionary”. On this day in 1945, these were the words of “Manhattan Project” director J. Robert Oppenheimer as he witnessed “Trinity”, the world’s first nuclear detonation.

The project had begun with an August 2, 1939 letter, written by the prominent physicists Leo Szilárd and Albert Einstein to President Franklin Roosevelt, warning that Nazi Germany may be working to develop a secret “Super Weapon”. It ended with that single explosion in the Jornada del Muerto (loosely, “Journey of the Dead Man”) desert, equal to the explosive force of 15,000 – 20,000 tons of TNT.

The Manhattan project, the program to develop the Atomic Bomb, was so secret that Vice President Harry Truman was unaware of its existence. President Roosevelt passed away on April 14, when Harry Truman was sworn in as President. He was fully briefed on the Manhattan project 10 days later, writing in his diary that night that the United States was perfecting an explosive great enough to destroy the whole world.

Nazi Germany surrendered on May 7, but the war with Japan ground on. By August, Truman faced the most difficult decision ever faced by an American President.  Whether to drop an atomic bomb on a population of human beings.

The morality of the decision has been argued ever since, and will continue to be, I’m sure. In the end, it was decided that to drop the bomb would end the war faster with fewer lives lost (on both sides), compared with an invasion of the Japanese home islands.

The second nuclear detonation in history took place on August 6 over Hiroshima, Japan. “Little Boy”, as the bomb was called, was delivered by the B29 Superfortress “Enola Gay”, named after the mother of United States Army Air Forces pilot Lieutenant Colonel Paul Tibbets. 66,000 Japanese citizens were vaporized in an instant, or died within the following days from the effects of the bomb.  Another 100,000 later died from injuries and the delayed effects of radiation.

Even then, the Imperial Japanese Government refused to surrender.  ‘Fat Man’, a plutonium bomb carried by the B29 “Bockscar”, was dropped on Nagasaki on August 9.

The intended target was Kokura, but local weather reduced visibility.  393d Bombardment Squadron Commander Major Charles Sweeney bypassed Kokura and chose the secondary target, Nagasaki. Half of Nagasaki was destroyed in the blast, and another 70,000 people killed.

Japan surrendered unconditionally on the 14th of August, ending the most destructive war in history.

During the 1920s, the University of Göttingen was one of the world’s leading centers for theoretical physics. American-born J. Robert Oppenheimer was himself educated there, along with the likes of Enrico Fermi, Edward Teller, and the English-born Paul Dirac, regarded as “one of the most significant physicists of the 20th century”.

The academic landscape of 1920s Germany was such that the Nazi regime may very well have been first to the nuclear finish line, but for the politicization of the universities themselves, brought on by National Socialist policy. 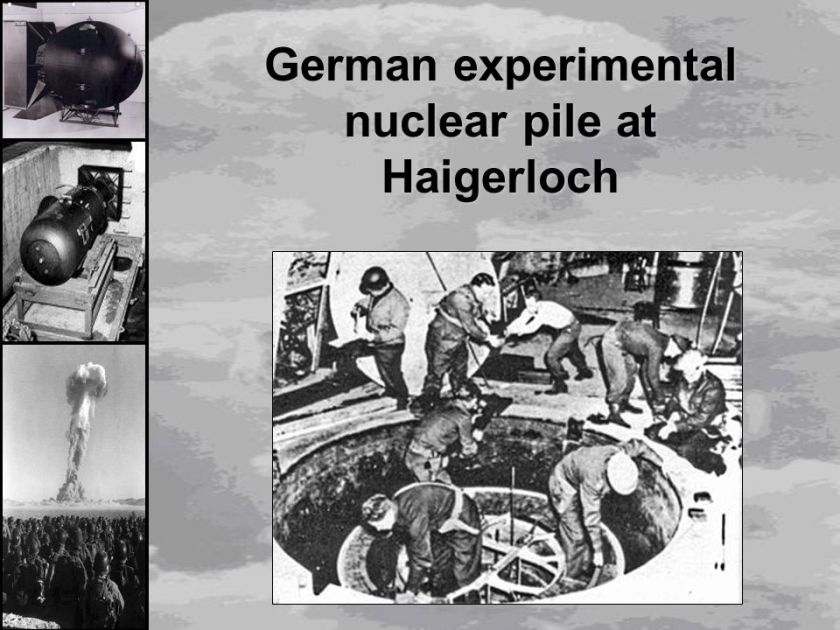 On April 7, just 67 days after Adolf Hitler’s appointment as Chancellor, the ‘Civil Service Law’ of 1933 established the framework for the removal of ‘undesirables’ in civil service, medicine, education and the legal profession. A series of increasingly draconian anti-Jewish laws left tens of thousands of Jews including that pillar of modern theoretical physics Albert Einstein himself, no choice but to flee.

More than 133,000 German Jewish émigrés moved to the United States between 1933 and 1944, many of them highly educated and some holding Nobel prizes. In a research paper for the University of Stanford, assistant Professor of Economics Petra Moser reported a 31% increase in the number of US patents in the physical sciences, after 1933.

The Nazi nuclear weapons project began on December 17, 1938 when German physicist Otto Hahn and assistant Fritz Strassmann discovered the atomic fission of heavy elements. The first real push to develop a nuclear weapon began the following April but fizzled months later, when a number of notable physicists were drafted into the Wehrmacht.

A second such effort began on September 1, 1939, the day that Hitler invaded Poland. While the Nazi nuclear program received funding throughout the war, it never received the concentrated effort of a Manhattan project. Instead, the program was carved into three separate pieces, and personnel were always subject to the recruiting needs of the military, irrespective of education, training or skills.

This series of decisions, no doubt taken in some conference room somewhere, put Nazi Germany behind in the nuclear arms race. How different the world would be, if Little Boy and Fat Man displayed swastikas, painted on their sides.