Called by some the “Lexington of the Sea”, the little-known episode was the first naval battle of the American Revolution, and ended in victory for the Patriot side. 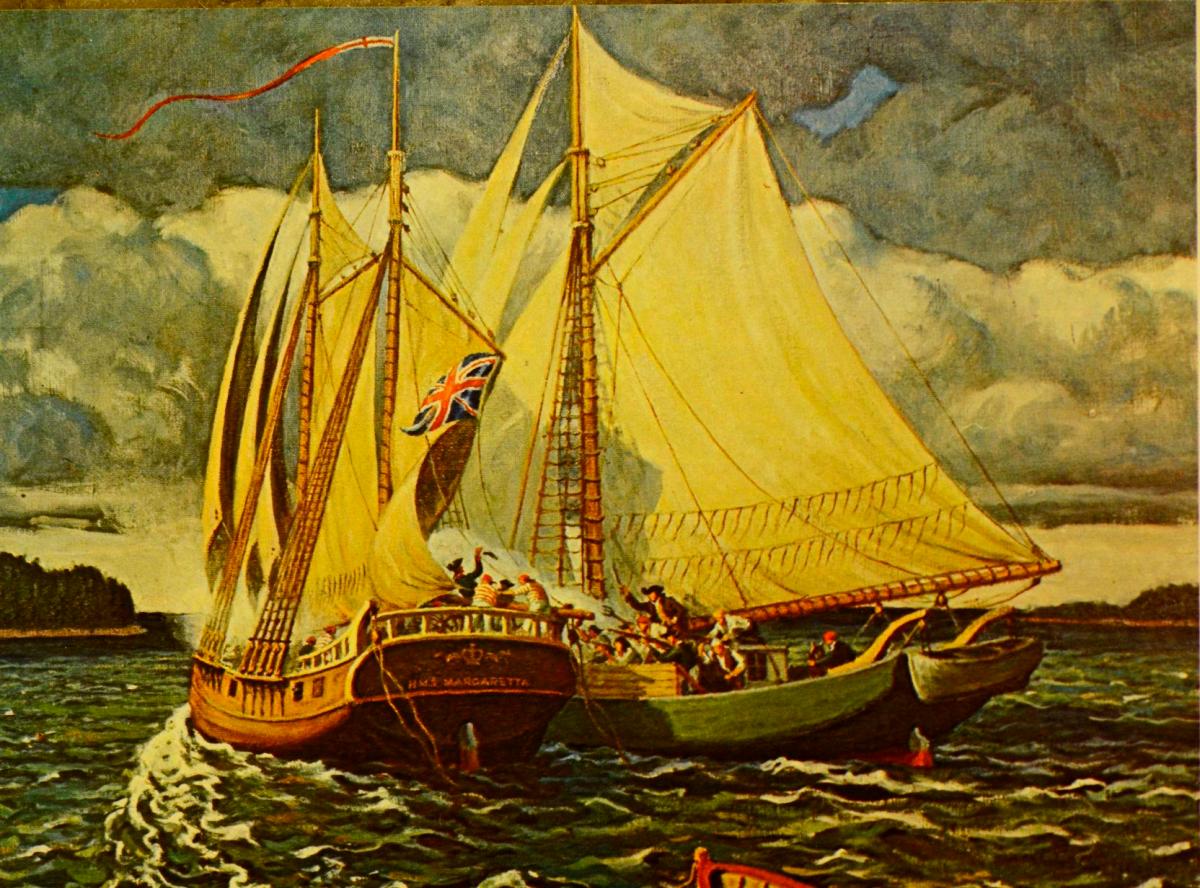 In the Passamaquoddy tongue, “Machias” roughly translates into “bad little falls”, after the river that runs through the place. Five hours and 15 minutes drive-time from Boston, Machias Maine sports a campus for the University of Maine, a municipal airport and, even today, a year-round population barely exceeding 2,000.

Not necessarily a place where you’d expect the first naval combat of the American Revolution.

In 1775, the modern state of Maine was still part of Massachusetts. Machias itself, a small fishing village on the “Downeast” New England coast, had been a thorn in the British side, since the earliest days of the Revolution.   A local pilot intentionally grounded the coastal patrol schooner HMS Halifax that February, in Machias Bay.  The place also served as a base from which privateers preyed on British merchant shipping.

In April, a British foray from the occupied city of Boston had culminated in the Battle at Lexington Green.  While the King’s troops held the ground in the wake of the early morning skirmish, the decision of the afternoon’s battle at nearby Concord was quite different.  The colonial’s response to the column of “Regulars” was that of a swarming behive, resulting in a Patriot victory and a British retreat under fire, all the way back to Boston.

Boston was all but an island in those days, connected to the mainland only be a narrow “neck” of land.  A Patriot force some 20,000 strong took positions in the days and weeks that followed, blocking the city and trapping four regiments of British troops (about 4,000 men) inside of the city.

For General Thomas Gage, in charge of all those troops, the best hope for resupply was by water.

British Royal Navy Admiral Samuel Graves wanted the guns from the wreck of the Halifax, concerned they would otherwise fall into rebel hands.  Gage wanted lumber, with which to build barracks.  So it was that the wealthy merchant and Tory loyalist Ichabod Jones was enlisted to help, blissfully unaware of the dim view in which his activities were held by fellow colonials.

Jones arrived at Machias on June 2 aboard the merchant ships Unity and Polly, under guard of the armed schooner HMS Margaretta, commanded by Midshipman James Moore.  They had come to trade food for lumber but the townspeople were split, and voted against doing business with Jones.  This provoked a threat from the Margaretta, which moved into range to bombard the town.  The action resulted in a second vote and the trade was approved, but Jones’ response was ham-fisted.   The merchant would only do business, with those who had voted with him in the first place.

Local militia leader Colonel Benjamin Foster conceived a plan to seize the merchant, and saw his opportunity on June 11, when Jones and Moore were in church.  They almost had the pair too, but Jones saw some twenty men approaching, and fled for the woods.  Moore was able to get back to the Margaretta, but events soon spun out of control.

Colonel Foster and his brother, a man with the delightful name of Wooden Foster, seized the Unity.  A group of thirty began to construct breastworks to serve as protection, while others commandeered the coastal packet Falmouth.   There was gong to be a fight.

A group of Machias men approached Margaretta from the land and demanded her surrender, but Moore lifted anchor and sailed off in attempt to recover the Polly.  A turn of his stern through a brisk wind resulted in a boom and gaff breaking away from the mainsail, crippling the vessel’s navigability. Unity gave chase followed by Falmouth.

Called by some the “Lexington of the Sea”, the little-known episode was the first naval battle of the American Revolution, and ended in victory for the Patriot side.  Four Royal Navy seamen were killed outright and another ten wounded including Moore himself, who received a musket ball to the chest and died the following day.

Patriot losses amounted to ten killed and another three wounded.

British forces attempted a second assault on Machias, with an amphibious landing of 1,000 troops over the 13th – 14th of August, 1777.  The attempt was beaten back by local militia and their Passamaquoddy and Penobscot allies, with both sides claiming victory.  The nearby village of Castine would be occupied in 1779 as would Machias itself during the War of 1812.  On both occasions, captured territories were re-dubbed the Crown Colony of “New Ireland”, a refuge for Loyalists and a base for future military operations.

The Crown Colonies of New Ireland survived for four years in the first instance and eight months in the second.  The failed Penobscot expedition of 1779 to retake the colony would result in the most catastrophic defeat suffered by American Naval forces until the Japanese attack on Pearl Harbor 162 years later, but that must be a story for another day.