The first such defenestration took place back on July 30, 1419, when radical followers of the Protestant reformer Jan Hus were marching by the new town hall. Someone threw a rock out of the window at them, and they busted down the door.  The mob threw a judge, a Burgomaster and 13 members of the town council out of the window. 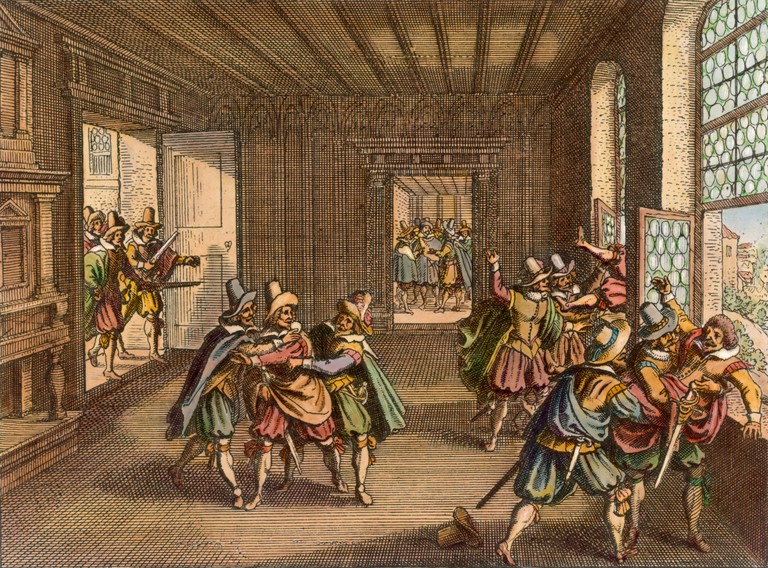 Défenestrer:  from dé- +‎ fenêtre +‎ -er.  The word is obsolete now, but in the old French, the root signified “window”.   “Defenestrate” then, combines with an object, meaning to throw a person or thing, out of  the window.

In 1840, a young politician found himself in a legislative minority, opposed to a payment to the Illinois State Bank.  In order to prevent a quorum,  a handful of Whigs attempted to leave the chamber.  Finding the door locked, our man stepped to a second-story window, and jumped out.  Abraham Lincoln would come to regret what he called his “window scrape”, but the future 16th President was far from the first politician to jump out of a window.  Voluntarily, or otherwise.

Jezebel, yeah that Jezebel, the unlovable Queen of Israel from the Bible, was executed by defenestration, in BC842.

In 1617, the Kingdom of Bohemia included pretty much all of the modern-day Czech Republic, a principality in those days ruled by the Habsburg dynasty, and included in the Holy Roman Empire.

Ever since the Peace of Augsburg in 1555, the religious persuasion of all subjects was guided by the principle of “Cuius Regio, Eius Religio“:   the ruling Prince got to choose the religious practices of his subjects.

The system worked fairly well, and Emperor Rudolf II further guaranteed religious liberty in his “Letter of Majesty”, of 1609. Then came King Matthias, aging and without issue, who elected Ferdinand of Styria his heir in 1617. Now everything changed. A strong proponent of the Catholic counter-reformation, Ferdinand was not well disposed to the religious liberties of the Protestant majority. Before long, Bohemian officials were closing Protestant chapels. 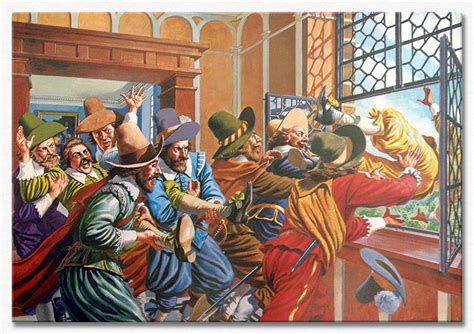 On May 23, 1618, “Defensors” appointed under the Letter of Majesty to protect Protestant rights called an assembly in Prague, trying and convicting the Imperial Regents of violating their religious rights. These Regents were Vilem Slavata of Chlum, and Count Jaroslav Borzita of Martinice. Having been found guilty, they, along with their secretary Philip Fabricius, were thrown out of the windows of Prague Castle. Literally. 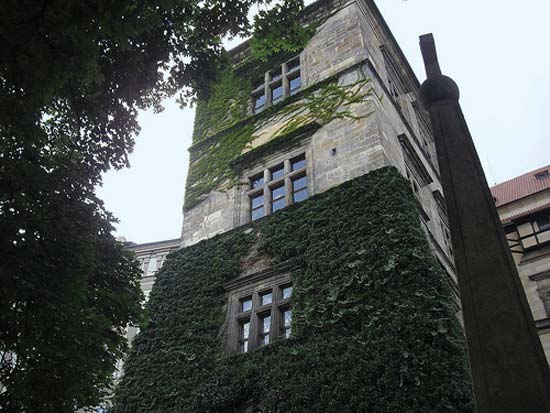 This event, the Defenestration of Prague, signaled the beginning of the 30 years’ war, but this wasn’t the first time that someone had been thrown out of a Prague window.

The first such defenestration took place back on July 30, 1419, when radical followers of the Protestant reformer Jan Hus were marching by the new town hall. Someone threw a rock out of the window at them, and they busted down the door.  The mob threw a judge, a Burgomaster (“Master of the Town”) and 13 members of the town council out of the window.

These guys weren’t as fortunate as the victims of the second defenestration, 200 years later.  These guys died in the fall or were dispatched by the mob, below.

What happened to the victims of the second defenestration? Surprisingly, none of the three were seriously injured. Supporters claimed they were caught and protected from injury by holy angels.  Detractors attributed their salvation to a pile of horseshit.  Be that as it may, Phillip Fabricius was made a Noble by the Emperor, and granted a title:  Baron von Hohenfall.   (“Baron of Highfall“).

I swear I wouldn’t make that up.