It’s been said of the American civil war and could no doubt be said of any number of conflicts, that a generation of women had to accustom themselves to new ideas of male ‘beauty’.

For many, the mention of ‘cosmetic surgery’ conjures images of vanity.  The never-ending and inevitably fruitless attempt to stave off the years.  Add some here and take it off over there.  But what of the face left smashed and misshapen, burned or blown half off in service to country?

“Plastic” Surgery, the term comes to us from the Greek Plastikos and first used by the 18th century French surgeon Pierre Desault, has been with us longer than you might expect.  Evidence exists of Hindu surgeons performing primitive ‘nose jobs’, as early as BC800-600.  The Renaissance-era surgeon Gaspare Tagliacozzi (1545-1599) developed new methods of reconstruction, using the patient’s own arm skin to replace noses slashed off in swordplay.

A hillside battle at a place called Hastings changed the world in 1066 yet, if you were on the next hillside, you may not have heard a thing.  The industrialized warfare of the 19th and 20th century was vastly different, involving entire populations and inflicting unprecedented levels of destruction on the human form.

It’s been said of the American civil war and is no doubt true of any number of conflicts, that a generation of women had to accustom themselves to new ideas of male ‘beauty’.  The ‘Great War’ of 1914 – ‘18 was particularly egregious when it came to injuries to the face, neck and arms, as millions of soldiers burrowed into 450-mile-long trench lines to escape what German Private Ernst Jünger described as the “Storm of Steel”.

In the Battle of Verdun, German forces used 1,200 guns firing 2.5 million shells supplied by 1,300 ammunition trains to attack their Allied adversary on the First Day, alone.

For every soldier killed in the Great War, two returned home, maimed. Artillery was especially malevolent, with “drumfire” so rapid as to resemble the rat-a-tat-tat of drums, each blast sending thousands of jagged pieces of metal, shrieking through the air. 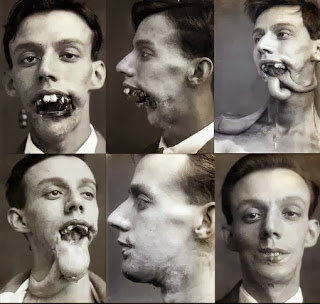 For many, severe facial disfigurement was a fate worse than amputation.  Worse than death, even.  To have been grievously wounded in service to country and return home to be treated not as a wounded warrior, but as something hideous.

The untold human misery of having been turned into a monster, misshapen and ugly.  For these men, life often became one of ostracism and loneliness.  The painful stares of friends and strangers alike, repelled by such disfiguration, offtimes lead to alcoholism, divorce and suicide.

Manchester Massachusetts sculptor Anna Coleman Ladd moved to France in 1917.  Inspired by the work of British artist Francis Derwent Wood and his “tin noses shop”,  Ladd founded the “Studio for Portrait-Masks” of the Red Cross in Toul, to provide cosmetic prosthetics for men disfigured by the war.

Ladd’s prostheses were uncomfortable to wear, but her services earned her the Légion d’Honneur Croix de Chevalier and the Serbian Order of Saint Sava.

The New Zealand-born otolaryngologist Dr. Harold Gillies was shocked at the human destruction, while working with the French-American dental surgeon Sir August Charles Valadier on new techniques of jaw reconstruction and other maxillofacial procedures.

The sterile medical notation “GSW (gunshot wound) Face” does not begin to prepare the mind for a horror more closely resembling a highway roadkill, than the face of a living man.  I left the worst of such images out of this essay.  They’re easy enough to find on-line, if you’re interested in seeing them.  The medical science is fascinating, but the images are hard to look at.

Dr. Gillies watched the renowned French surgeon Hippolyte Morestin, a man known as “The Father of the Mouths” after multiple breakthroughs in oral surgery, remove a tumor and use the patient’s own jaw-skin, to repair the damage. 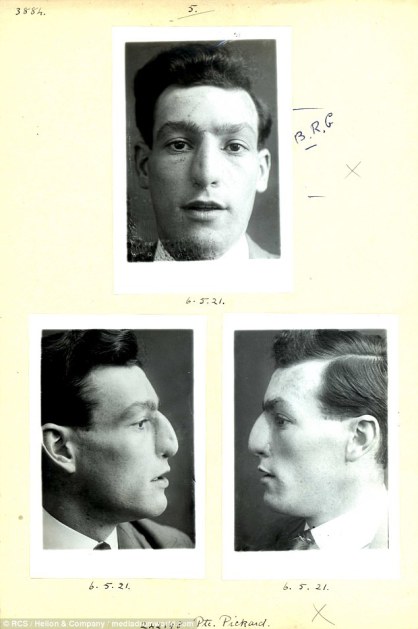 Joseph Pickard, of the 5th Northumberland Fusiliers, before and after Dr. Gillies.  H/T Daily Mail

Gillies understood the importance of the work, and spoke with British Chief Surgeon Sir William Arbuthnot Lane.  The conversation lead to a 1,000-bed facial trauma ward at Queen Mary’s Hospital in Sidcup, Kent, opened in June, 1917.

The Queen Elizabeth-class battleship HMS Warspite took fifteen direct hits from German heavy shells, at one point having no rudder control and helplessly turning in circles.

Petty Officer Walter Yeo was manning the guns aboard Warspite and received terrible injuries to his face, including the loss of upper and lower eylids, and extensive blast and burn damage to his nose, cheeks and forehead.

Yeo was admitted to Queen Mary’s hospital the following August, where he was treated by Dr. Gillies and believed to be the first recipient of a full facial graft taken from another part of his own body.

Dr. Gillies & Co. developed surgical methods in which rib cartilage is first implanted in foreheads, and then swung down to form the foundational structure of a new nose.

At a time before antibiotics, tissue grafts could be as dangerous as the trenches themselves.   “Tubed pedicles” were developed to get around the problem of infection, where living tissue and its blood supply was rolled into tubes and protected by the natural layer of skin.  These tubes of living tissue weren’t pretty to look but were relatively safe from infection.  When the patient was ready, new tissue could be “walked” into place, become whole new facial features.

Dr. Harold Gelf Gillies, the Father of modern plastic surgery, performed more than 11,000 such procedures with his colleagues, on over 5,000 individuals.  Work continued well after the war and through the mid-twenties, developing new and important surgical techniques.

Dr. Gillies received a knighthood for his work in 1930 and, during the inter-war years, trained many other Commonwealth physicians on his surgical methods.  Just in time to send the following generation, off to the next war.