The first minor league game played under the lights drew 12,000 spectators, at a time when the host club was averaging only 600 per game. As the Great Depression dragged on, minor league owners were finding night games a key to staying in business. Even then, the Poobahs of Major League Baseball were slow to catch on. 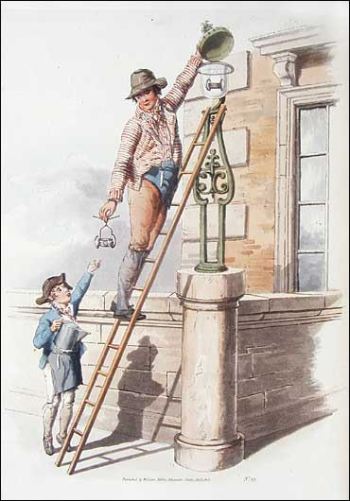 In 18th century London, it was a bad idea to go out at night. Not without a lantern in one hand, and a club in the other.

The city introduced its first gas-lit street in 1807 on the Central London Pall Mall, between St. James’s Street & Trafalgar Square. Before long, hundreds of “Lamp Lighters” could be seen with their ladders, gas lights bathing the city in a soft, green glow.

The Westminster Review newspaper opined that gas lamps had done more to eliminate immorality and criminality on the streets, than any number of church sermons.

The United States followed nine years later, when the city of Baltimore lit up in 1816.

Thomas Edison patented the first carbon-thread incandescent lamp in 1879.  The first baseball game played “under the lights” took place the following year near Nantasket Beach, in the ‘south shore’ town of Hull, Massachusetts.

It was September 2, 1880 when two teams, sponsored by the RH White & Co. and Jordan Marsh department stores of Boston, played a full nine innings to a 16-all tie.  The era of the night game had arrived, and the lamp lighters of London, can be seen to this day.

Except, no, it didn’t work out that way.  The lamp lighter part is true enough.  Today, five gas engineers keep the Victorian era alive, winding and checking the mechanisms, polishing the glass and replacing the mantles of some 1,500 – 2,000 gas lamps.

Across the pond, organized baseball would take another fifty years to give the arc light another try.

Evidence exists of other 19th-century night games, but these were little more than novelties. Holyoke Massachusetts inventor George F. Cahill, creator of the pitching machine, devised a portable lighting system in 1909. With the blessing of Garry Herrmann, President of the Cincinnati Reds, Cahill staged an exhibition game on the night of June 19, between the Elk Lodges of Cincinnati and Newport, Kentucky.

The crowd of 3,000  had little trouble following the ball and Cahill was an enthusiastic salesman for his invention, but the man was doomed to frustration and disappointment.  Night-time exhibition games were regularly met with great enthusiasm, yet Organized Baseball was slow to catch on.

The Class B New England league played a night exhibition game on June 24, 1927 before a crowd of 5,000, sponsored by the General Electric Employees’ Athletic Association. The Washington Senators were in town at that time to play the Boston Red Sox.  Delegations from both clubs were on-hand to watch Lynn defeat Salem in a seven-inning game, 7-2. Washington manager Bucky Harris and Boston manager Bill Carrigan, were impressed. Senator’s star outfielder Goose Goslin expressed a desire to play a night game. Claude Johnson, President of the New England League, predicted that all leagues would have night baseball within five years, including the majors.

When the Great Depression descended across the land, minor league clubs folded by the bushel. Small town owners were desperate to innovate. The first-ever night game in professional baseball was played on May 2, 1930, when Des Moines, Iowa hosted Wichita for a Western League game.

The game drew 12,000 spectators at a time when Des Moines was averaging just 600 per game.  Soon, minor league owners were finding night games a key to staying in business.

Even then, the Poobahs of Major League Baseball were slow to catch on.  Five years later, the Cincinnati Reds defeated the Philadelphia Phillies in the first-ever big league game played under the lights.

A crowd of 25,000 spectators waited on this day in 1935, as President Roosevelt symbolically turned on the lights from Washington DC.  The Reds played a night game that year against every National League opponent and, despite a losing record of 68-85, enjoyed an increase in paid attendance of 117%.

Thoughought the ’30s and ’40s, teams upgraded facilities to include lights and, before long, most of Major League Baseball had night games on the schedule. Wrigley Field, home of the Chicago Cubs and the second-oldest MLB stadium after Fenway Park, was the last to begin hosting night games. To this day, the Cubbies remain the only major league team to host the majority of its games, during the day.