For the family who now owned him, the  neglected, half-starved pack animal out back suddenly became a “beloved pet”.  They couldn’t possible let him go for anything less than $30,000.  (But, of course).

Al Taqaddum Airbase, “TQ” in military parlance, is a military airbase, 45 miles west of Baghdad, on the Habbaniyah Plateau of Iraq. In 2008, Al Taqaddum was home to the 1st Marine Logistics Group, under the command of Colonel John D. Folsom.

Early one August morning, Colonel Folsom awoke to a new sound. The thwap-thwap-thwap of the helicopters, the endless hum of the generators, those were the sounds of everyday life. This sound was different – the sound of braying donkey.

Folsom emerged from his quarters to find the small, emaciated animal, tied to a eucalyptus tree.  Standing all of 3′ tall, a sergeant had spotted the donkey roaming outside Camp Taqaddum, and thought it would be amusing to catch him.  Folsom thought it might be fun to have one around. Time would tell they were both right.

The website for a UK donkey sanctuary recommends a diet of highly fibrous plant material, eaten in small quantities throughout the day. I read the list twice and nowhere will you find bagels yet, for this little Iraqi donkey, there was nothing better.  Preferably frozen.  He’d hold them in his mouth and walk along, scraping the bagel in the dirt before eating it.  He liked to play the same game, with a deflated rubber ball.

You won’t find cigarettes on the list either, but he stole one once, and gobbled it down.  It didn’t seem to matter that the thing was lit.  For that reason and because of the color of his coat, the Marines called him “Smoke”. 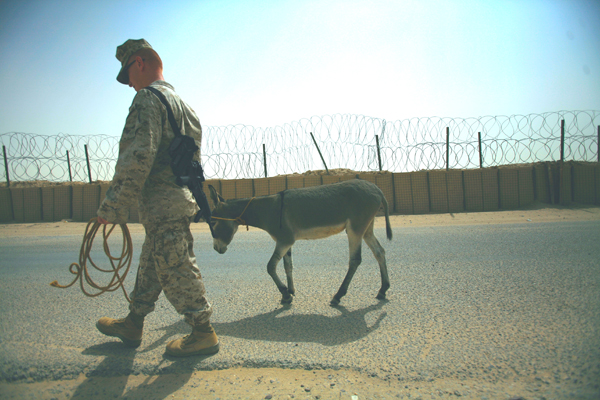 Before long,  Smoke was a familiar sight around Camp Taqaddum.  After long walks around the wire, Smoke learned to open doors and wander around.  If you ever left that candy dish out on your desk, you were on your own.

Regulations prohibit the keeping of pets in a war zone.  A Navy Captain helped get Smoke designated as a therapy animal, and he was home to stay.  As it turned out, there was more than a little truth to the label.  For young women and men thousands of miles from home in a war zone, the little animal was a welcome reminder of home.

The humor of the situation was hard to resist, and the “ass jokes” all but told themselves.  (Sorry, but we’re talking about Marines, here).  Dozens of Marines laughed uproariously in that mess hall in 2009, belting out a mangled version of an old Kenny Rogers song: “Yes, he’s once, twice, three times a donkey…. I loooooovvvvvveeeeee youuuuuuuuu.”

That was the year when Folsom’s unit cycled out of Camp Taqaddum, to be replaced by another contingent of Marines.  These promised to look after the 1st MLG’s mascot, but things didn’t work out that way.  A Major gave the donkey away to a Sheikh who in turn dumped him off on an Iraqi family, and that was the end.  Except, it wasn’t.

Colonel Folsom couldn’t get the little animal out of his head and, learning of his plight in 2010, determined to get him back.  There were plenty of kids who had survived trauma of all kinds in his home state of Nebraska.  Folsom believed that the animal could do them some good, as well.

There ensued a months-long wrangle with American and Iraqi authorities, who couldn’t understand why all the fuss over a donkey.  For the family who now owned him, the  neglected, half-starved pack animal out back suddenly became a “beloved pet”.  They couldn’t possible let him go for anything less than $30,000.  (But, of course).

900 donors pitched in and, despite seemingly endless obstacles and miles of red tape, Smoke the Donkey slowly made his way from al-Anbar to Kuwait and on to Turkey and finally, to his new home in Nebraska.

ABCNews.com broadcast this announcement on May 18, 2011. Smoke the Marine Corps Donkey, “mascot, ambassador, and battle buddy”, was now, an American.  Semper Fi.