Mario “Motts” Tonelli hoped to fulfill his one years’ commitment and return to the Cardinals for the ’42 season, but it wasn’t meant to be. The radio crackled to life at 2:30am local time on December 7. “Air raid on Pearl Harbor. This is no drill!”

The game was November 27, 1937.  Late in the 4th quarter, Notre Dame was tied 6-6 with Southern California. The “Fighting Irish” needed a miracle. Notre Dame fullback #58 Mario Tonelli took the hand-off deep in Notre Dame territory and ran the ball 70 yards back before being tackled. Seconds later, the 5’11”, 195lb Tonelli, scored the game winning touchdown.

In some ways, Mario Tonelli himself was the miracle. At the age of 6, “Motts” Tonelli had been burned over 80% of his body, when a trash compactor toppled over on him. Mario’s immigrant father Celi, a laborer from a northern Italian marble quarry, refused to believe the doctor who said his son would never walk again. Fixing four wheels to a door, the elder Tonelli taught his first American-born son to move about with his arms. By 1935, Mario Tonelli was a football, basketball and track star at Chicago’s DePaul Academy. 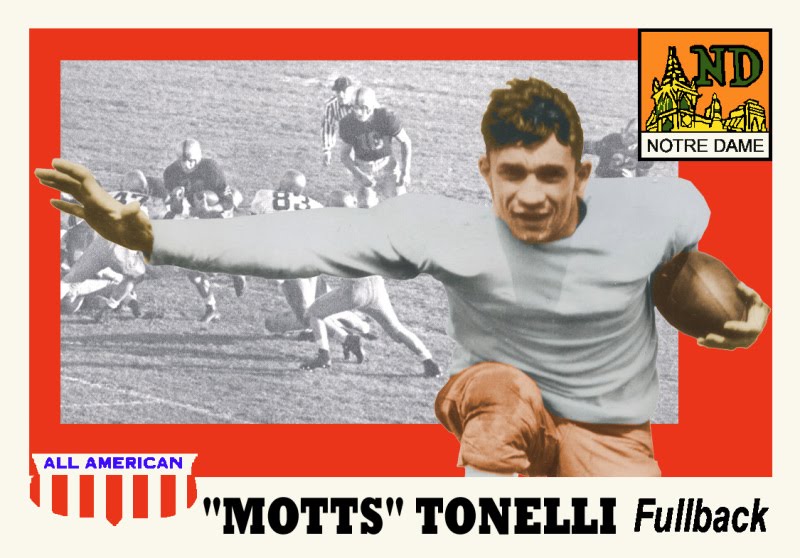 After a year coaching at Providence College in 1939 and a year playing professional football for the Chicago Cardinals in 1940, Tonelli joined the Army in early 1941, assigned to the 200th Coast Artillery Regiment in Manila.

Tonelli hoped to fulfill his one years’ commitment and return to the Cardinals for the ’42 season, but it wasn’t meant to be. The radio crackled to life at 2:30am local time on December 7. “Air raid on Pearl Harbor. This is no drill!” 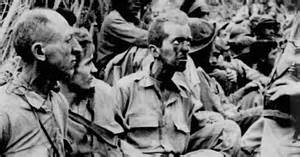 Military forces of Imperial Japan appeared unstoppable in the early months of WWII, attacking first Thailand, then the British possessions of Malaya, Singapore, and Hong Kong, as well as US military bases in Hawaii, Wake Island, Guam and the Philippines.

The United States was grotesquely unprepared to fight a World War in 1942, and dedicated itself to beating Adolf Hitler first. General Douglas MacArthur abandoned the “Alamo of the Pacific” on March 11 saying “I shall return”, leaving 90,000 American and Filipino troops without food, supplies or support with which to fight off the Japanese offensive.

On April 9, 75,000 surrendered the Bataan peninsula, beginning a 65 mile, five-day slog into captivity through the heat of the Philippine jungle. Japanese guards were sadistic. They would beat the marchers and bayonet those too weak to walk. Japanese tanks  swerved out of their way to run over anyone who had fallen and was too slow in getting up. Some were burned alive. Already crippled from tropical disease and starving from the long siege of Luzon, thousands perished in what came to be known as the Bataan Death March.

Exhausted, sunburned and aching with thirst, Tonelli still refused when a Japanese soldier demanded his Notre Dame class ring. As the guard reached for his sword, a nearby prisoner shouted “Give it to him. It’s not worth dying for”.

Minutes later, a Japanese officer appeared, speaking perfect English. “Did one of my men take something from you?” “Yes”, Tonelli replied. “My school ring”. “Here,” said the officer, pressing the ring into his hand. “Hide it somewhere. You may not get it back next time”. Tonelli was speechless. “I was educated in America”, the officer said. “At the University of Southern California. I know a little about the famous Notre Dame football team. In fact, I watched you beat USC in 1937. I know how much this ring means to you, so I wanted to get it back to you”.

Nearly 700 Americans and over 10,000 Filipinos died on the Bataan death march. For the survivors, the ordeal was only the beginning. For 2½ years, Tonelli suffered starvation, disease and endless beatings in the squalid prison camps known as O’Donnell, Cabanatuan, and Davao. Tonelli kept his ring throughout, buried in a soap dish. He’d take it out from time to time to remind himself:  life used to be better than this. It gave him something to hope for.

The hellish 60-day journey aboard the filthy, cramped merchant vessel began in late 1944, destined for slave labor camps in mainland Japan. Tonelli was barely 100 pounds on arrival, his body ravaged by malaria and intestinal parasites. He was barely half the man who once played fullback at Notre Dame Stadium, Soldier Field and Comiskey Park.

Arriving at Nagoya #7 prison camp, Tonelli was handed a piece of paper. Scribbled on it was a 58. He was prisoner number 58, the same number he once wore on his football Jersey. “From that point on,” he said, “I knew I was going to make it”.

An American military tribunal conducted after the war held Lieutenant General Homma Masaharu, commander of the Japanese invasion forces in the Philippines, guilty of war crimes. He was executed by firing squad on April 3, 1946.

Mario Tonelli always hoped to meet the officer who’d returned his ring, but it wasn’t meant to be. He probably didn’t survive the war. Tonelli still had that ring when he passed away, in 2003.

Last year, nearly 10,000 gathered in New Mexico, to commemorate the 75th anniversary of the Bataan death march. 7,200 retired and active duty military personnel and civilians gathered to run the 26.2 “Death March” through the hilly desert terrain of the White Sands Missile Range, a race described by DoD.mil as “one of the toughest marathon-length events in the U.S.”

Ed Broadnax of El Paso, Texas, ran the course in full uniform, boots and 45-pound backpack. “As a veteran who served 26 years in the US Army and deployed three times to combat and experienced the horrors of war, I feel pain for the men and women who suffered intensely under the deadly Japanese Imperial Forces, as they were marched through the Philippine jungle. This is what drives me to run in their honor.”

Hundreds of others walked a 14.2 mile course, including Bataan Death March survivor Ben Skardon, who turned 100 last July.  Mr. Skardon walked 8½.  “The word hero doesn’t apply to me, at all”, Skardon said.  “As I said in my talk, ‘no greater love hath any man, than to lay down his life for his friends’.  That’s in the bible”.