If you are so inclined, there’s nothing like a visit to the place where history happened, to make the story come alive.

“Today in History” will be suspended for a time, following the passing of the man for whom I am namesake: Lieutenant Colonel (retired), Richard B. “Rick” Long, Sr.

I have a few new articles tee’d up to post automatically. If you’re interested, please sign up on the right, to receive email notifications when they come out.

Thank you for your interest.

Photography by my son and Rick Sr.’s grandson Daniel Christopher Long, an apple who didn’t fall far from the tree.

So it is that Emperor Napoleon Bonaparte, a General who fought and won more battles than Hannibal Barca, Alexander the Great, Julius Caesar and Frederick the Great, combined, was defeated and driven out of town…by bunnies. 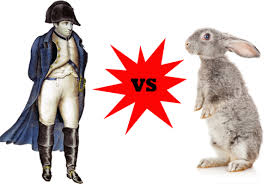 In Christian tradition, Jesus of Nazareth was crucified on Good Friday, arising from the dead two days later to reveal himself to his disciples, before finally ascending to heaven.

So where did the Easter Bunny come from? 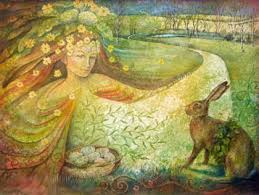 Many of the secular symbols associated with Easter trace back to the pagan goddess of spring and the dawn, Ēostre or Ostara, from the Old English Ēastre. History fades into mythology in the pre-Christian usage and accounts differ, but this Teutonic deity was frequently depicted with eggs symbolizing the rebirth of Spring.  And rabbits.

It’s small wonder that the latter symbolized fertility.  A female Hare, called a “Jill” has a 42-day gestation period, and is capable of conceiving while still pregnant.  Kriss Kringle and an egg laying Easter Hare called “Osterhase” or “Oschter Haws” came to America in the 1700s, with German immigrants who settled in Pennsylvania. Children would make nests of clothing and blankets, in which the creature could lay its colored eggs. This is the origin of the Easter basket.

Hares and rabbits are different species of the same family, like sheep and goats. Until the 18th century, rabbits were called Coneys, after the Latin “cuniculus”. The word has all but disappeared from American English vernacular, its only use today relates to Coney Island, in New York.

It was around that time that the diminutive, fuzzier “bunny” came to replace the Easter Hare.

History gives us a tale about rabbits having nothing whatever to do with Easter, but it’s way too good not to tell it here.  I swear it’s not an April Fool.

The story involves no less a figure than Napoleon Bonaparte.  In July 1807, Napoleon had just signed the Treaty of Tilsit, ending the war between the French Empire and Imperial Russia. Looking to celebrate, Napoleon suggested a rabbit hunt, and ordered his Chief of Staff Alexandre Berthier to make it happen.

Berthier put together an outdoor luncheon, inviting the highest brass from the French military. Meanwhile, Napoleon’s men ranged far and wide, collecting rabbits for the hunt. As many as 3,000 of them.

Napoleon arrived at one side of a grassy field with his beaters and gun bearers, with all those caged rabbits lined up on the other side. Rabbits and Hares are predictably shy and retiring creatures, but Berthier’s soldiers had found it easier to purloin domesticated rabbits instead of flushing out the wild variety, and these things were hungry.

The hunt was supposed to start when all those cages opened up but, instead of scattering, a swarm of rabbits thought it was dinner time and pelted straight across the field.

The most powerful man in the world thought it was funny at first, until all those rabbits started coming up his legs. Coachmen cracked bullwhips and men grabbed sticks.  There was shooting and shouting and pandemonium, everywhere.  Still, the bunny horde came on.

Baron Paul Thiébault was there, let him tell the story. “The intrepid rabbits turned to the Emperor’s flank, attacked him frantically in the rear, refused to quit their hold, piled themselves up between his legs till they made him stagger, and forced the conqueror of conquerors, fairly exhausted, to retreat and leave them in possession of the field”. 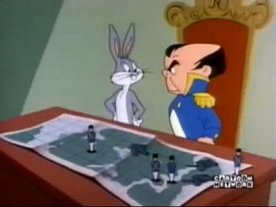 Napoleon retreated to his carriage, but still the attack continued. Historian David Chandler picks up the story. “With a finer understanding of Napoleonic strategy than most of his generals, the rabbit horde divided into two wings and poured around the flanks of the party and headed for the imperial coach.” The tide of bunnies continued.  Some even got into the carriage.  The assault finally ebbed away, only as the Royal Conveyance, drove out of sight.

So it is that Emperor Napoleon Bonaparte, a General who fought and won more battles than Hannibal Barca, Alexander the Great, Julius Caesar and Frederick the Great, combined, was defeated and driven out of town…by bunnies.