ICYMI – “Barney” Welansky, the current owner, liked to brag about his ties with the Mob and with Boston Mayor Maurice Tobin. Welansky was in Mass General Hospital that night, recovering from a heart attack. He would soon have a lot of company.

If you go behind the Hotel Radisson in Boston, over by the parking garage, you’ll find 17 Piedmont Street, in the Bay Village neighborhood. The address is a parking lot now.  75 years ago, it contained the most popular nightclub in Boston.

Rumors of criminal connections followed the Cocoanut Grove for years. The former owner, gangster and bootlegger Charles “King” Solomon, had been gunned down ten years earlier in the men’s room of Roxbury’s Cotton Club. “Barney” Welansky, the current owner, liked to brag about his ties with the Mob and with Boston Mayor Maurice Tobin. Welansky was in Mass General Hospital that night, recovering from a heart attack. He would soon have a lot of company.

During prohibition, the club had been a speakeasy . Originally a garage and warehouse, Cocoanut Grove was converted into a 1½ story complex of dining rooms, bars, and lounges, offering patrons dining and dancing in a “tropical paradise” of artificial palm trees, satin bunting and paper palm fronds, complete with a roof which could be rolled back when weather permitted, for dancing under the stars. 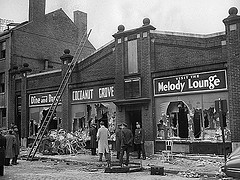 Welansky was a tough boss, maniacally determined not to be cheated out of a tab or a cover charge. He locked exit doors, concealed others with draperies, and even bricked up one emergency exit. Nobody was going to leave Cocoanut Grove without paying up.

Boston College had just ended an undefeated season, losing their slot in the Sugar Bowl in a stunning upset to Holy Cross, 55–12.

Over a thousand football fans, military service members, and Thanksgiving weekend revelers crowded into the nightclub that night.  The rated capacity was 460.

Downstairs in the Melody Lounge, Goody Goodelle played piano on a revolving stage, surrounded by paper palms. Someone, perhaps a soldier on leave with his sweetheart, had removed a light bulb to have a little privacy. 16-year old bus boy Stanley Tomaszewski climbed up to replace the bulb, lighting a match so he could see what he was doing.

The decorations ignited immediately, fire racing so fast along the satin canopy, that wooden strips suspending it from the ceiling remained unscathed.

Waiters attempted to douse the fire with water, but it spread far too quickly. Lounge patrons were overcome so rapidly by toxic smoke, that some were later found dead in their seats, drinks still in their hands.

Flames raced up the stairway to the main level, burning the hair of people trying to escape. The orchestra was just beginning its evening show as a fireball leapt across the dance floor, spreading quickly through the Caricature Bar, and down a hallway to the Broadway Lounge. Inside of five minutes, flames had spread into the main hall and the entire nightclub was ablaze.

Today, fire codes require revolving doors to be flanked by doors on either side, but that wasn’t the case in 1942. Desperate to escape, patrons packed the single revolving door, their bodies jamming it so tightly that firefighters later had to dismantle the entire frame.

The bodies of club guests piled up at locked exits, as other doors, opening inward, became useless in the crush of bodies. Firefighters later testified that 300 could have been saved, if only those doors had opened to the outside.

Ambulances, taxis, newspaper delivery trucks and private cars descended on Boston City Hospital’s emergency room, the injured, dead and dying arriving at a rate of one every eleven seconds. Dr. Stanley Levenson, just a year out of Harvard Medical School and down that night with food poisoning, got the call. “I was still in bed on Saturday night, when I got a call from Dr. Charles Lund, chief of surgery, and he told me that no matter how I felt, I had to get to ER immediately, something terrible had happened”.

The most striking story of survival that night, was that of 21-year old Coast Guardsman Clifford Johnson, who returned to the nightclub no fewer than four times in search of his date, Estelle Balkan. He didn’t know that she had safely escaped, and each time Johnson returned with another unconscious smoke victim in his arms. Johnson himself was on fire his last time out, when he collapsed onto the sidewalk, still ablaze.

Three other burn victims were taken to Mass General that night, with burns over 30% of their bodies.   Johnson alone survived the ordeal, despite third degree burns over 50% of his body. Much of that, was burned to the bone.  Johnson would suffer almost two years of excruciating medical procedures, including no fewer than 30,000 skin grafts in the first year alone.

I earn my living in the Commercial Furniture business.  I can tell you from experience that Cocoanut Grove effects Boston fire code regulations, to this day. 492 died in the conflagration, the deadliest nightclub fire in American history. 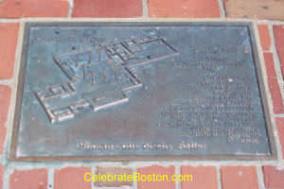 Barney Welansky was tried and convicted on 19 counts of manslaughter, and sentenced to 12-15 years. Maurice Tobin, by then Governor, released him after four, his body ravaged with cancer. Welansky died 9 weeks later. Stanley Tomaszewski was exonerated.  It wasn’t he who had placed all those flammable decorations, but the bus boy was treated like a Jonah, for the rest of his life.

Clifford Johnson would be 21 months in the hospital, after which he married his nurse and returned to his home state of Missouri, the first of his era to survive such severe burns. Ironically, Johnson would be killed in a car wreck in 1956, pinned beneath an overturned Jeep, and burned to death.

If you enjoyed this “Today in History”, please feel free to re-blog, “like” & share on social media, so that others may find and enjoy the same. Please click the “follow” button on the right, to receive email updates on new articles.

Thank you for your interest, in the history we all share.