According to legend, a young boy approached Shoeless Joe Jackson one day as he came out of the courthouse. “Say it ain’t so, Joe”.  There was no response.

The scandal started with Arnold “Chick” Gandil, the first baseman with ties to Chicago gangsters. Gandil convinced Joseph “Sport” Sullivan, a friend and professional gambler, that he could throw the upcoming World Series against the Cincinnati Reds. A New York gangster named Arnold Rothstein supplied the money through his right-hand man, the former featherweight boxing champion Abe Attell, and the “fix was in”.

Pitchers Eddie Cicotte and Claude “Lefty” Williams, along with outfielder Oscar “Hap” Felsch, and shortstop Charles “Swede” Risberg were all principally involved with fixing the series. Third baseman George “Buck” Weaver was at a meeting where the fix was discussed, but decided not to participate.  Weaver handed in some of his best statistics of the year during the Series.

Star outfielder “Shoeless” Joe Jackson may have been a participant, though his involvement is disputed. It seems that other players may have used his name in order to give themselves credibility. Utility infielder Fred McMullin was not involved in the planning, but he threatened to report the others unless they cut him in on the payoff.

The more “straight arrow” players on the club knew nothing about the fix. Second baseman Eddie Collins, catcher Ray Schalk, and pitcher Red Faber had nothing to do with it, though the conspiracy got an unexpected boost when Faber came down with the flu.

Rumors were flying when the series started on October 2. So much money was on Cincinnati that the odds were flat.  Gamblers complained that nothing was left on the table. Williams lost his three games in the best-out-of nine series, which I believe stands as a World Series record to this day. Cicotte became angry, thinking that gamblers were trying to renege, and he bore down, the White Sox winning game 7.

Williams was back on the mound in game 8.  By this time he wanted out, but gangsters threatened to hurt him and his family if he didn’t lose the game. The White Sox lost Game 8 on October 9, ending the series 3 to 5.

Rumors of the thrown series followed the White Sox through the 1920 season and a grand jury was convened that September.  Two players, Eddie Cicotte and Shoeless Joe Jackson, testified on September 28, 1920, both confessing to participating in the scheme. Despite a virtual tie for first place at the time, club owner Chuck Comiskey pulled the seven players then in the majors (Gandil was back in the minors at the time).  The damage to the sport’s reputation prior to the 1921 season was profound.

Franchise owners appointed a man with the best “baseball name” in history to help straighten out the mess. He was Major League Baseball’s first Commissioner, federal judge Kennesaw Mountain Landis.

Key evidence went missing from the Cook County courthouse before the trial, including Cicotte’s and Jackson’s signed confessions. Both recanted and, in the end, all players were acquitted. The missing confessions reappeared several years later in the possession of Comiskey’s lawyer. It’s funny how that works.

According to legend, a young boy approached Shoeless Joe Jackson one day as he came out of the courthouse. “Say it ain’t so, Joe”.  There was no response.

Jackson, Cicotte, Gandil, Felsch, Weaver, Williams, Risberg, and McMullin are long dead now, but every one remains Banned from Baseball. 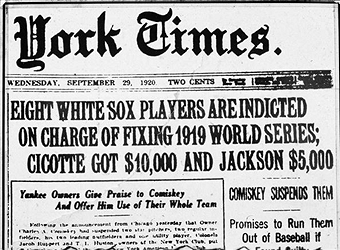 Ironically, the 1919 scandal would lead to a White Sox crash in the 1921 season, beginning the “Curse of the Black Sox”. It was a World Series championship drought that lasted 88 years, ending only in 2005, with a sweep of the Houston Astros. Exactly one year after the Boston Red Sox ended their own 86-year drought, the “Curse of the Bambino”.

The Philadelphia Bulletin newspaper published a poem back on opening day for the 1919 series.  They would probably have taken it back, if only they could.

“Still, it really doesn’t matter, After all, who wins the flag.

Good clean sport is what we’re after, And we aim to make our brag.

To each near or distant nation, Whereon shines the sporting sun.

That of all our games gymnastic, Base ball is the cleanest one!”