French President Charles de Gaulle came to New York City in 1960, surprising media and dignitaries alike when all he wanted to do was to visit with a black elevator operator at the Rockefeller Center.

Eugene James Bullard was born October 9, 1894 in Columbus Georgia, the seventh of 10 children born to William Octave Bullard and an indigenous Creek named Josephine “Yokalee” Thomas.  Bullard’s father had come from Martinique, where his people could trace their lineage back to the Haitian Revolution.

Eugene wanted to leave behind the racial discrimination of his day.  The near-lynching of his father became the catalyst in 1902, when the boy was eight.  He ran away from home, spending the next four years doing odd jobs to survive  The elder Bullard had always told him “in France a man is accepted as a man regardless of the color of his skin”.   In 1906, the boy stowed away on a German ship to Aberdeen.

Bullard worked a number of odd jobs to support himself.  By age 16 he was becoming well known as a boxer, and moved to Paris at the first opportunity.

WWI broke out in August of 1914.  By the end of the year the French nation had suffered over a half million casualties.

Bullard enlisted in the French Foreign Legion, an American serving as one of 54 different nationalities serving in the Moroccan Division, Third Marching Regiment.

The Regiment was sent to the Somme front in 1915, where 300,000 Frenchmen were lost by the end of November. One unit of 500 men began the disastrous Champagne offensive of September.    At the end of the battle, 31 responded to the first evening’s roll call.

What remained of Bullard’s unit was disbanded to form the 170th Infantry, and sent to Verdun.  He thought he had arrived in hell, saying, “I thought I had seen fighting in other battles but no one has ever seen anything like Verdun – not ever before or ever since.”

Erich von Falkenhayn had designed his battle plan for Verdun to “bleed France white”, calling Verdun Operation Gericht.  Operation Execution Place.  Over 250,000 died in the 10 months long battle, more than 100,000 were missing and 300,000 gassed or wounded.

Bullard had been wounded four times before.  On March 5th 1916, he received the wounds that took him out of the ground war.  He was 8 months in hospital when the opportunity arose to join the French Flying Corps.  A white American buddy bet him $2,000 that he couldn’t get into aviation and become a pilot, and he took the challenge.  Bullard earned his wings on May 5, 1917, and received his $2,000 soon thereafter. 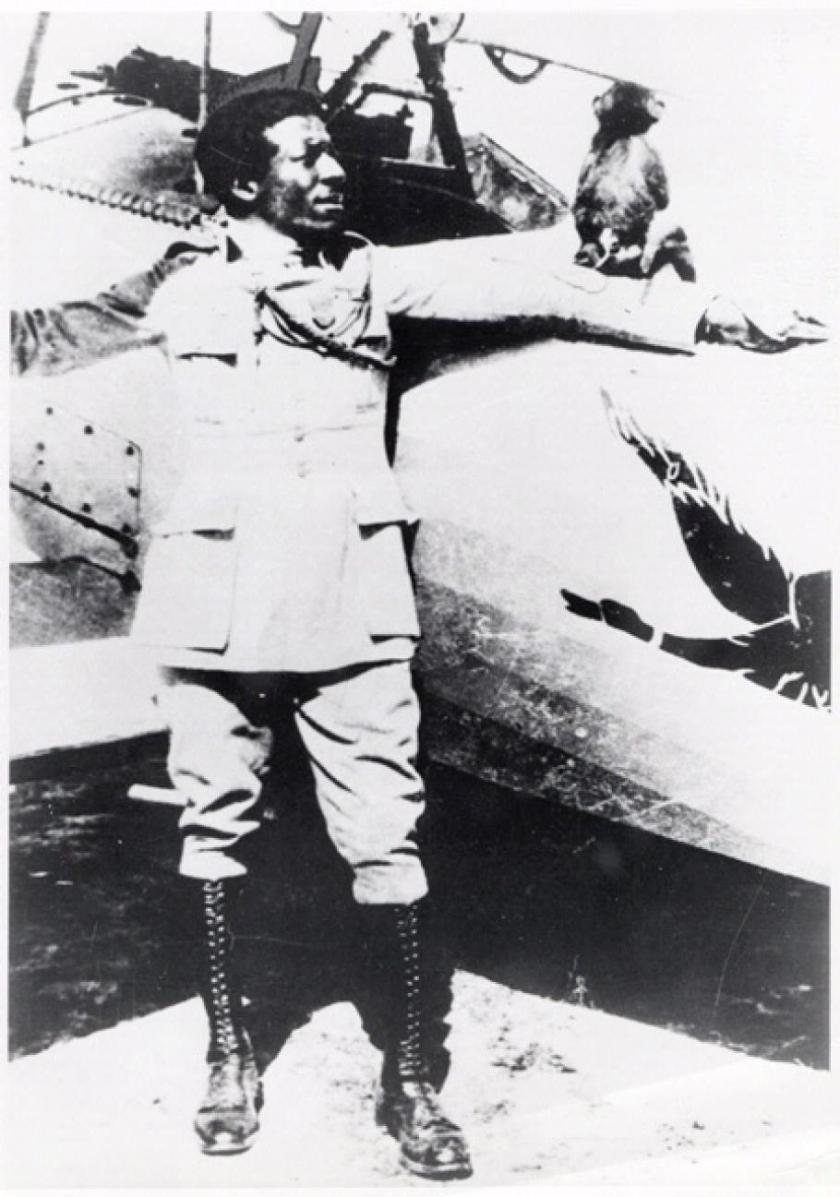 Bullard was assigned to the 93d Spad Squadron on August 17, 1917, flying Spad V11s and Nieuports with a mascot, a pet Rhesus Monkey he called “Jimmy”.  He said, “I was treated with respect and friendship – even by those from America.  Then I knew at last that there are good and bad white men just as there are good and bad black men.”

The first black combat pilot and the only one to serve in the Great War, Bullard painted a bleeding red heart pierced by a knife on the side of his Spad biplane. Below the heart were the words “Tout le Sang qui coule est rouge!” The phrase roughly translates as “All Blood Runs Red”.

Bullard is credited with two kills while flying for the 93rd, though one of the Germans crashed behind enemy lines so it remained unconfirmed.  He tried to join the American squadron when the US entered the war, but the whites only policy of the time prevented him from doing so.

Bullard married in 1923.  The marriage ended in divorce, with Bullard gaining custody of their two surviving daughters (a son had died of pneumonia in infancy).   He became a drummer at the jazz club, “Le Grand Duc”, later buying his own club and calling it “L’Escadrille”.  Bullard made several famous friends during this time, including Josephine Baker, Louis Armstrong, Langston Hughes and the French flying ace Charles Nungesser.

He volunteered with the 51st Infantry when WWII broke out, becoming wounded and escaping to the United States in 1940.

Bullard spent his last days in obscurity. His daughters had married by the 1950s, and he lived alone in a New York apartment, decorated with pictures of his famous friends and a framed case containing his fifteen French war medals.  He worked as an elevator operator at the Rockefeller Center, where nobody knew anything about his service.

The French government requested his presence in 1954, when he and two white Frenchmen were accorded the honor of relighting the Eternal Flame at the Tomb of the Unknown French Soldier at l’Arc de Triomphe.

France honored Bullard once again in 1959, naming him a Knight of the Légion d’honneur in a lavish ceremony in New York City. Dave Garraway interviewed him on the Today Show, but he remained alone and unknown in his native country.

French President Charles de Gaulle came to New York City in 1960, surprising media and dignitaries alike when all he wanted to do was to visit the black elevator operator who worked at the Rockefeller Center.

Eugene James “Jacques” Bullard died on October 12, 1961.  He was buried with the tri-color of France draping his coffin, laid to rest with full honors by the Federation of French War Officers at Flushing Cemetery in New York.

The first black fighter pilot, the “Black Swallow of Death”, was honored by the country he had loved and served during two world wars.  On August 23, 1994, 77 years after Bullard’s American flight physical, the USAF posthumously awarded Eugene Bullard a commission as a Lieutenant.