Senator Stephen A. Douglas, he of the later Lincoln-Douglas debates, was in the audience at the time, and said “this damn fool Sumner is going to get himself shot by some other damn fool”.

For the earliest European settlers in this country, massive amounts of labor would be required to carve a living out of the North American wilderness.

A system of indentured servitude began as early as 1607, where individuals paid for their passage to the new world with terms of labor.

The first Africans arrived in 1619 and at first, they too were given terms of indenture. Slave laws were soon passed however, Massachusetts in 1641 and Virginia twenty years later, as permanent bondage replaced temporary indenture in the lives of an increasing number of blacks.

The “peculiar institution” of slavery proved most economically feasible in large, labor intensive farm operations such as tobacco producers. By the end of the Revolution, it had proven to be unworkable in the colder climates.

Slavery may have withered in the south as well, but for the invention of the cotton gin (short for “engine”) by Massachusetts native Eli Whitney in 1792. The machine could do the work of ten men and the world’s appetite for American cotton seemed endless. 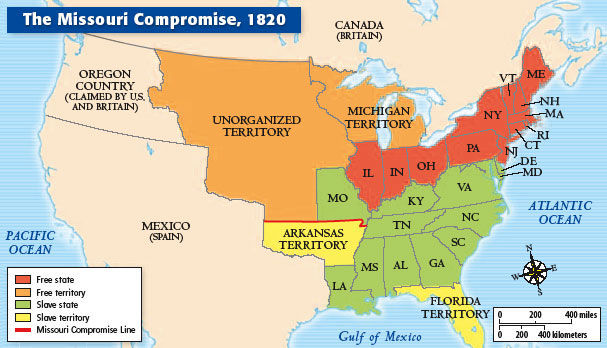 There were just over a million slaves in the US in 1805, worth about $300 million. On the eve of the Civil War 55 years later, their number had quadrupled while their value as “property” had increased tenfold. In the eleven states which eventually joined the Confederacy, four out of ten people were slaves by 1860, doing over half of the agricultural labor. It wasn’t limited to the “South” either, the census of that year counted some 92,500 slaves in the “Northern” states of Maryland and Delaware, and another 2,000 in Washington DC.

The “Missouri Compromise” of 1820 simultaneously carved Maine out of Massachusetts and added Missouri to the Union, attempting to preserve the balance of “Slave” vs “Free” states at 12 each. Both sides hated it, one for its acquiescence in the face of slavery, the other because of the precedent that Congress could limit it. 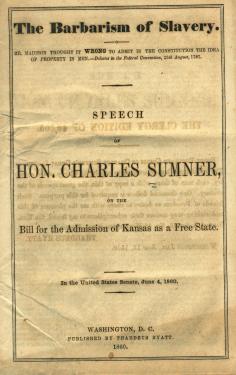 In the 1850s, a series of confrontations between anti-slavery “Free-Staters” and pro-slavery “Border Ruffians” took place in the Kansas Territory. The Kansas-Nebraska Act of 1854 intended to democratize slavery, allowing local elections on the issue. Instead, it further pitted the sides against one another in a period of violence known as “Bleeding Kansas”.

Massive amounts of cotton money flowed through the financial centers of New York City. 40% of every dollar that Europeans paid for Southern cotton stayed in New York, in the form of insurance, shipping, warehouse fees and profits.

When South Carolina seceded in December 1860, the world waited to see who would next call for secession. It was New York City, when Mayor Fernando Wood addressed that city’s governing body on January 7.  Two days later Mississippi called for secession, the second of the cotton states to do so.

Into this morass comes Charles Sumner, Senator from Massachusetts. A powerful speaker, Sumner was an adamant opponent of slavery, and a leader of the Radical wing of the Republican Party. One of a handful of “hotheads” on both sides of the slavery issue, he could be so confrontational that even his fellow Republicans sometimes asked him to tone it down.

Charles Sumner took to the floor of the Senate on May 20, 1856, and denounced the Kansas-Nebraska Act in the harshest of terms, even for him. He attacked the measure’s sponsors Stephen A. Douglas of Illinois (he of the later Lincoln-Douglas debates), and Andrew Butler of South Carolina, by name, accusing the pair of “consorting with the harlot, slavery”.  Douglas was in the audience at the time, and said “this damn fool Sumner is going to get himself shot by some other damn fool”.

Senator Butler’s nephew, Preston Brooks, was a member of the House of Representatives from South Carolina. He was an inflexible proponent of slavery, believing that any restriction was an attack on the southern state’s right of self-determination and the social structure of the south.

Brooks was furious when he heard of the speech, and wanted to challenge Sumner to a duel. He discussed it with fellow South Carolina Democrat, Representative Laurence M. Keitt, who explained that dueling was for gentlemen of equal social standing. Sumner was no gentleman, he said, no better than a drunkard.

Brooks had been shot in a duel years earlier, and walked with a heavy cane. Resolved to publicly thrash Sumner, he entered the Senate building on May 22, in the company of Keitt and Virginia Democrat Representative Henry A. Edmundson.

The trio approached Sumner, who was sitting at his desk writing letters. “Mr. Sumner”, Brooks said, “I have read your speech twice over carefully. It is a libel on South Carolina, and Mr. Butler, who is a relative of mine.”

Sumner’s desk was bolted to the floor.  He never had a chance. He began to rise when Brooks brought the cane down on his head. Over and over the cane smashed down on Sumner’s head while Keitt brandished a pistol, telling onlookers to “let them be”. Blinded by his own blood, Sumner tore the desk from the floor in his struggle to escape, losing consciousness as he attempted to crawl away. Brooks rained down blows the entire time, even after the body lay motionless, until finally, the cane broke apart.

Reaction to the attack split along regional lines. Newspapers in the south applauded this upholding of family honor before a social inferior. Southern Senators made rings from broken pieces of the cane, while Northern Senators took to carrying knives to defend themselves. Newspapers said that national debate had been replaced by the bowie knife and the club.

Sumner’s fellow Massachusetts Republican Representative Anson Burlingame denounced Brooks as a coward on the floor of the House, earning him a challenge to a duel from Brooks, who appears to have been surprised by Burlingame’s eager acceptance. As the challenged party, Burlingame had the right to choose weapons, and he specified rifles on the Canadian side of Niagara Falls as the site. Knowing Burlingame to be an expert shot, Brooks declined the duel, objecting to unspecified risks to his safety if he was to cross “hostile country” to reach Canada. He would be mocked as a coward by Northerners for the rest of his life.

It was three years before Charles Sumner was able to resume his duties in the Senate, his colleagues keeping his seat vacant for the entire time: a reminder of the country’s political division. The nation would be plunged into Civil War five years later, almost to the day.